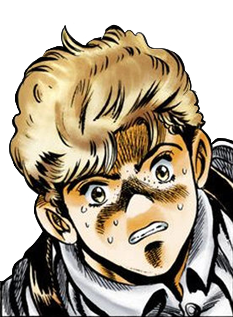 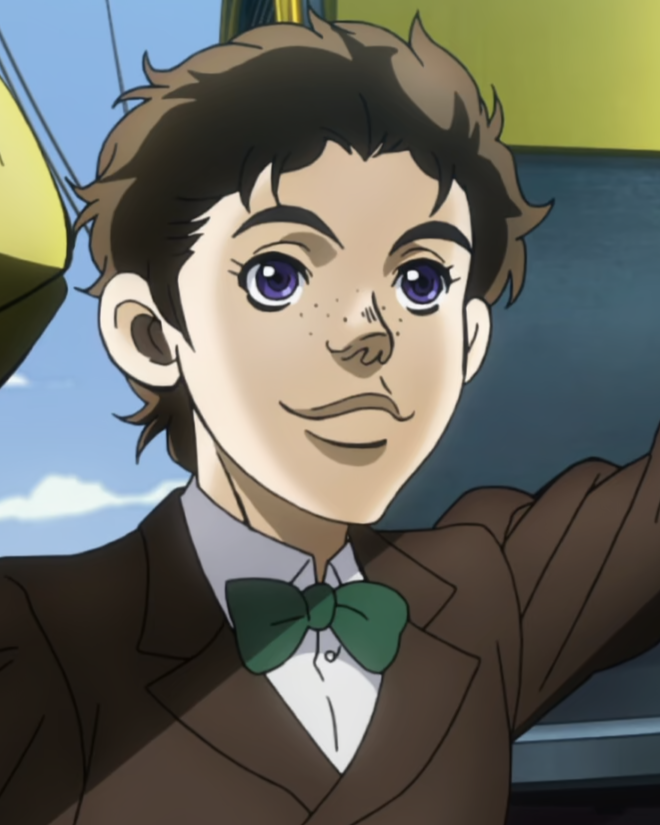 Poco (ポコ,, Poko) is a secondary ally featured in the first part of the JoJo's Bizarre Adventure series, Phantom Blood.

Poco is a young boy used as bait by Dio Brando to lure the Joestar Group into a trap. He eventually joins them on their quest in order to save his sister and proves useful during the fight with Tarkus.

Poco is a young British boy of understandably short stature. He has short wavy hair and freckles. His attire consists of a light, collared shirt with rolled up sleeves and a pair of pants held up by suspenders. He is shown wearing a straw-hat during his introduction and for most of the story he is lacking footwear. At Jonathan and Erina's departure to America, he dons a dress jacket and bow tie.

Poco is introduced as a mischievous and cowardly boy who steals the group's supplies. Later, however, when Jonathan is losing against Tarkus, Poco is shown to be willing to risk his life to help the group. He also worries about his sister when she is taken captive by Dio.

Slapped by his sister

Poco was a cowardly boy who was bullied by other kids, and his sister protected him. When confronted by her about when he was going to fight back and not depend on her anymore, Poco answered that he would do this "tomorrow", which caused her to slap him.[1] When Dio took shelter in Windknight's Lot, he brainwashed Poco to lure Jonathan into a trap.

On their way to Dio's castle, Jonathan's group encounters Poco, who is introduced as a pickpocket who steals the group's supplies. In reality, he was under Dio's mind control, and Poco quickly finds himself in danger from Dio's zombies.[2] While he is able to get away from the group quickly, he is ultimately dragged back into the graveyard by two bullies who don't believe his story. Luckily, though his bullies are killed, he is saved from Tarkus by Jonathan.[3]

While attempting to find shelter for Poco, Jonathan is trapped in the Chamber of the Two-Headed Dragon and forced to fight in the Chain Neck Deathmatch against Tarkus. Speedwagon notices that a child could fit through the windows in the chamber, but Zeppeli dissuades him from asking the child to help. However, Poco climbs into the hole anyway, believing that his town and everyone he loves will be killed if Jonathan fails. Poco suffers a kick from Tarkus but manages to open the door, allowing Zeppeli and Speedwagon to come to Jonathan's aid.[1]

After Tarkus's defeat and Zeppeli's death, the group reaches the town itself, where Poco is accosted by a livid Mr. Adams and warned that his sister will punish him for being out too late. However, Mr. Adams reveals himself to be a Zombie as soon as the group turns their back, only to be swiftly defeated by Jonathan.[4] The group reaches Poco's home, where Poco's father informs him that his sister has gone out to seek him, causing Poco to fear for her safety. He accompanies the group to Dio's castle, reuniting with his sister after Doobie's defeat.[5] Though Page, Jones, Plant, and Bornnam surround the two, they are protected by Straizo, who quickly destroys the four zombies.[6] After the battle's end, he appears with his sister and the other characters on the port to wish Jonathan and Erina a good honeymoon.[7]

Poco is not a playable character, but he does appear in cutscenes reflecting the original story. After stealing from the Joestar group while hypnotized, he later becomes an ally. The game includes Poco's flashback to being bullied and arguing with his sister, as well as his discovery of his sister's disappearance and reunion with her. His final appearance, like in the original story, is at a dock with the rest of Jonathan's friends, seeing him off on his honeymoon voyage.