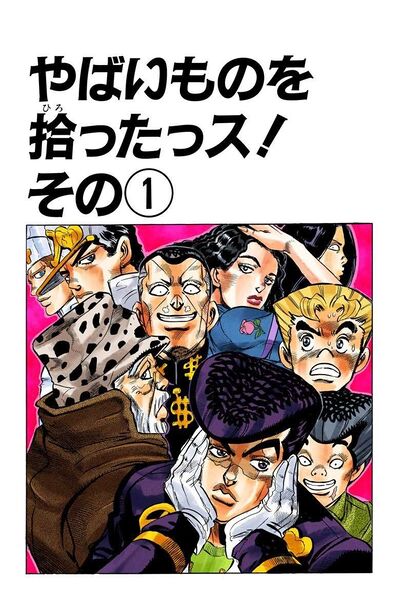 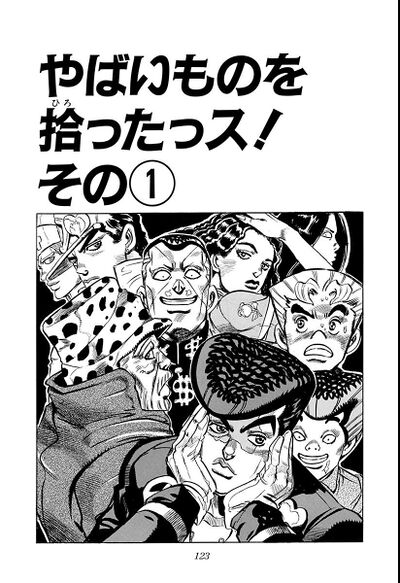 We Picked Up Something Crazy!, Part 1 (やばいものを拾ったっス！ その①, Yabaimono o Hirottassu! Sono 1), originally The Stand Laughed! (スタンドが笑った！, Sutando ga Waratta!) in the WSJ release, is the fiftieth chapter of Diamond is Unbreakable and the three hundred fifteenth chapter of the JoJo's Bizarre Adventure manga.

Meanwhile, Josuke has difficulties adjusting himself to Joseph Joestar's presence. Their relationship as father-bastard son is awkward, and Josuke requests that Joseph only sees Tomoko Higashikata from afar as to not upset her. Moreover, Josuke tells him that he doesn't feel any love toward him and tells him to leave Morioh without seeing Tomoko, which Joseph sadly accepts. After Joseph unwittingly takes a bus to Sapporo and Josuke has to run after it, they find themselves on the side of an isolated road where Joseph feels something pulling his pants, then his cane is taken from him. Joseph tries to warn Josuke that there is a Stand user nearby, but the youth dismisses him, thinking he is going senile. He follows the small handprints on the ground until a wild dog snarls at the invisible being. Joseph uses Hermit Purple to grab it from the danger of the dog. When it begins to cry in Joseph's arms, they discover that he is holding a baby.