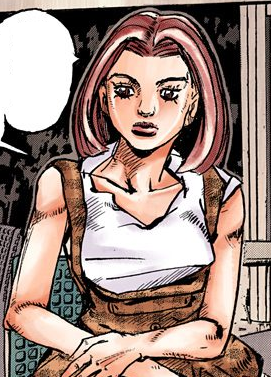 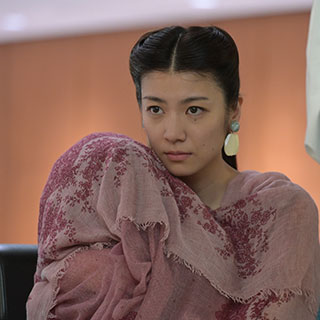 Thus Spoke Kishibe Rohan - Episode 8: Deoxyribonucleic Acid
“
Even 15 years since the accident... will I be able to love anyone other than my husband?
”
—Mai Katahira

Mai Katahira (片平 真依, Katahira Mai) is a character from the one-shot Thus Spoke Kishibe Rohan - Episode 8: Deoxyribonucleic Acid. She is the mother of Mao Katahira and is a friend of Yukako Yamagishi's mother.

Mai is a 38 year old woman, who nonetheless retains a youthful appearance and has a slim build. She keeps her light hair in a bob cut.

Mai wears a plain shirt under a tartan-patterned mini-dress which is decorated with several buttons put her and there on it. The dress is notably cut low enough to entirely reveal Mai's torso and her shirt.

In the TV Drama, Mai has long black hair that is parted in the middle and tied into a ponytail. She wears a plain blue dress and a pink shawl.

The series is known for alternating colors between media, the information presented below may or may not be canon.
Skin(Fair, red lips)
Hair(Peach)
Eyes(Brown)
Outfit(Brown dress, white shirt, gray shoes)

Mai is a peaceable and polite woman, usually keeping a polite and unassuming behavior. She notably doesn't react to Rohan Kishibe's constant bluntness and is even understanding of his refusal to help make Mao a normal child.

Mai is marked by the death of her former fiancé, and has not been able to forget her feelings toward him, being incapable of loving another man. However, Mai longed for a child and accepted to use a sperm bank to bear her daughter, Mao. Despite Mao's strange appearance and behavior, Mai loves her daughter and is thankful to have her. Although she is peaceable, if she thinks Mao is in danger, Mai will immediately jump to her rescue.

15 years before the events of Episode 8, Mai Katahira was engaged and freshly married, but then suffered a car accident in which she lost her husband. During the next years, Mai wasn't able to move on from her husband, dating several men but inevitably breaking up. However, Mai also underwent artificial insemination and had Mao, which she loved despite her deformities.

As Mao grew, Mai began to worry that she would bullied for her appearance and got into contact with Rohan Kishibe through Yukako Yamagishi and asked Rohan if he could cure her. However, Rohan wasn't interested and when he turned Mao into a book, claimed that she was ultimately fine the way she was. Nonetheless, Mai learned that the biological father lived in Yagatama and was 30 by the time he donated his sperm. Thus, she could investigate the cause of Mao's quirks.

Later, Mai incidentally saw a man who both fit the clues and reminded her strangely of her late husband. Following him up to the park Mao was playing, Mai was then victim of a prank: Mao shed her skin and disguises a friend as herself, making Mai believe she was being kidnapped by the same man. The misunderstanding being cleared, Mai then became acquainted with the man, named Obanazawa, and came to like him immediately.

Mai's story undergoes many notable changes in the TV Drama adaptation. Her occupation is mentioned to be in interior design.

Mai's family has a history of suffering from accidents. Both her parents died in an accident. Mai and her husband, Akira Katahira, were registered organ donors when they married. Six years before the events of Deoxyribonucleic Acid, Mai was pregnant with Mao when she lost her husband in a car accident. The organs were then transplanted to Taro Hirai, who had been in an accident around the same time. While Taro was hospitalized, Mai published a book on interior design through Shumeisha.

Mai lived anxiously for six years because it seemed that many accidents happened around her and Mao, and she developed a fear that her genes were the cause of it. She sheltered Mao and hid her because of her abnormal features, fearing that she would be bullied. In doing so, she unknowingly caused Mao to have the habit of covering herself and hiding, which may be why Mao develops her own ability.

One day, as she and Mao go for a walk in the park, Mao suddenly tugs on Taro's shirt, making him fall and bump his head on a wall. Worried, Mai and Kyoka Izumi bring him to a hospital. Mai waits in the hospital, with Mao hidden under her shawl, to know if Taro is alright. In the meantime, she meets Rohan Kishibe. She tries to hide Mao from Rohan but becomes interested in him when Kyoka says he knows hypnotherapy. Taro returns, and Mao grabs Taro a second time. Disturbed because Mao has never approached anyone like this, Mai leaves and returns home, scolding Mao for her "dangerous" actions. Upset, Mao goes to her plush tent.

When Rohan and Kyoka come to her, she's initially reluctant to let Rohan approach Mao, but he says that she can't hide Mao forever and that he knows she fears something. Mai resigns herself to explain all her fears and anxiety. She doesn't know why Mao is so abnormal and also fears that somehow, her genes could be the cause for the many accidents she's witnessed in her life. Rohan examines Mao but finds that she is simply what she is because of her genetics and upbringing. Mai having hidden her for six years is what influences her personality. Thus, there is nothing for Rohan to cure. Despite Mai's protestations, Rohan insists that he cannot and won't do anything. Mai wants a second examination and forcefully grabs Mao, but she escapes and disappears. Mai nervously looks for her, and when it looks like Mao has gone out of the house, they try going to the hospital. Mai reveals that her husband was an organ donor, and Rohan begins to see a connection.

Mai finds Mao at the children's playground, playing with Taro. She is actually astonished to see Mao being so lively. When she sees them, Mao runs off and is almost run over by a car, but Rohan manages to catch her. Mai is relieved that her daughter is safe. Rohan then turns her and everyone else into books to confirm his suspicion. Indeed, it seems that Taro was the one who received organs from Akira, Mai's late husband. Mao seems to have sensed a connection with him due to that.

Later, Taro, Mao, and Mai walk together, relieved that Mao is well. Mao says she's thirsty, and Taro buys her a can. When he returns, Taro sees that Mai is worried about him and reassures her, pointing out her forehead wrinkles. Embarrassed, he also scratches his head with his pinky, which makes Mai think of Akira. Moreover, he also offers a can of sweet coffee to her. Mai remembers Akira's words, who promised that he, Mai, and Mao would be fine. Realizing she may have found love again, Mai smiles and fights back tears of joy. She quickly joins Mao and Taro. All three walk away, holding each other's hands.