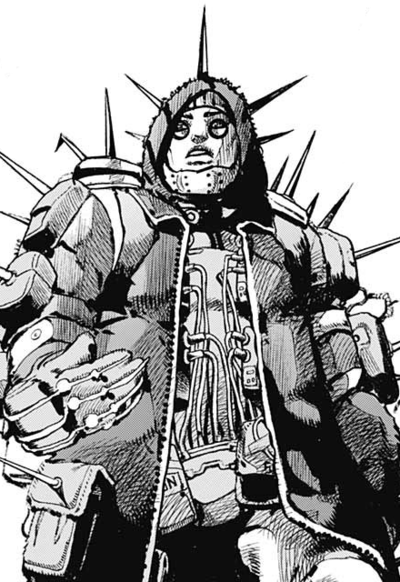 He is a mentally ill man who worries about the fate of the Earth due to carbon dioxide emissions. No longer having hope, he plans to blow up a power plant in Morioh.

The eco-terrorist is an adult man with a medium build and height. His features are nearly completely hidden by his thick clothing.

He wears a hooded dark heavy coat, thick boots, pants as well as gloves. Under his hood, he also wears a secondary headgear covering his forehead, cheeks and chin, only leaving the face exposed. The man wears a pair of round lenses with no apparent frame to hold them. He also has a large rectangular backpack containing hydrogen fuel tanks and liquid oxidizers. The most distinctive feature of the eco-terrorist's clothing is that his coat, boots and backpack are covered in long, thin black spikes.

The eco-terrorist is equipped with a large number of pouches on the legs, torso, arms and hips, all bearing an inscription like "C-1", or "3T". Those pouches contain 40kg of ANFO explosives along with nails and screws and are connected to his gloves via several wires. Furthermore, his gloves also have wires running along the fingers and are equipped with a button near the wrists which will trigger the explosives.

The eco-terrorist is a psychopathic man who is obsessed with saving the environment. After constantly being punished for his actions, the man has no qualms about killing innocent people, arguing that everyone is equally to blame for carbon dioxide emissions. He desires attention, wanting Rohan to witness his grand plan of blowing up the fossil fuel power plant so that his story can be immortalized.

Unlike most other antagonists in the Thus Spoke Kishibe Rohan series, the eco-terrorist does not display any supernatural abilities. However, he is still extremely capable and was even considered by Rohan to be unbeatable without the help of riot police at first. He is physically capable enough to snap Mitsuki's neck with little to no effort, and carry over 40kg of materials on him without struggling.

Showing off his explosive body suit

The eco-terrorist shows off having high intelligence, with particular expertise in technical and ecological knowledge. He shows his expertise in concepts of climate change and the effects that humans will have on the planet. He is even able to predict his carbon footprint and devise an eco-friendly approach to detonating his body by releasing highly pressurized water to neutralize the CO2 emissions.

Using his technical knowledge, the eco-terrorist constructs a full body suit to help him blow up the Morioh power plant. The suit is equipped with 40kg of ANFO (ammonium nitrate and fuel oil) explosives as well as hydrogen fuel tanks and liquid oxidizers contained in his backpack. Both of these mechanisms are attached with wires to buttons on his palms. When the plastic caps on the buttons are removed, he can activate the explosives by pressing down on them. Even if he were to be shot, the hydrogen fuel and liquid oxidizers would mix and produce water vapor, which at high pressures could propel him up to 100 meters away to his target before activating the explosives.

At some point, the man was married and had a child. Around 2009-2010, twelve years prior to when he met Rohan, he was part of an environmental organization dedicated to reducing carbon dioxide emissions. However, his leader was paid off by a big company that invested in the deforestation of tropical rainforests. The man tried to continue his work, but was arrested several times by security officials and the victim of multiple attempted assassinations. Consequently, he lost his job and became estranged from his family.

Around 2021-2022, he invited Rohan Kishibe to his house for an interview, although his goal was actually to lure Rohan to witness his plan. Planning to blow up Morioh's fossil fuel power plant along with himself, the man straps himself with explosives, hydrogen fuel tanks, and liquid oxidizer.

About to murder Mitsuki

While lying on the road, the man notices a woman named Mitsuki driving near the power plant and decides to get into her car. Due to wearing a backpack and gear full of spikes, his silhouette resembles a boar, and Mitsuki assumes she hit something. She exits the car to check but doesn't see anything, as the man managed to hide. However, Rohan was driving behind Mitsuki and witnesses him climbing into the back of her car. Rohan desperately tries getting Mitsuki's attention by ramming into the back of her car, turning his headlights on, honking, and throwing a fire extinguisher at her windshield, but she just assumes someone is trying to kill her. Rohan's attempts are in vain; as soon as he finally manages to tell her that the man is hiding behind her, he grabs Mitsuki's neck and snaps it. Rohan's car ends up colliding with hers.

Appearing from the car wreck to confront Rohan

Both Rohan and the eco-terrorist crawl out of the vehicles. The man manages to escape with no injuries, whereas Rohan is bleeding. He climbs on top of Mitsuki's car, eerily noting Rohan's recent adoption of Bakin. He remarks that Rohan will probably be able to make 15 to 20 years' worth of happy memories with the dog, but that they will soon become painful to remember due to the effects of climate change. He cites a 2018 prediction from the IPCC about the Earth's average temperature rising towards a point of no return at an alarming rate. He uses this as evidence that Bakin won't be able to have the happy life his owner wishes for him.

The eco-terrorist continues his speech, going into details about his past. Now sick of everything, the man reveals his goal of blowing himself up at the nearby power plant, going as far as to show Rohan the equipment he'll use for it. Rohan retorts that the man needs therapy and wonders why he invited Rohan to his house since Rohan is just a manga artist and not a journalist. The eco-terrorist claims that TV reporters would distort the truth and spread fake news about what happened, but Rohan could depict the truth in his manga using what he's about to see now. He claims that he lured Rohan all the way to this specific spot to keep him safe and that he only killed that woman because she was driving nearby.

Hearing the police sirens approaching, the man begins to act. Rohan cries for him to stop and to carry out his plan somewhere else since Morioh is his birth town. Rohan looks around and notices the nearby burs on the ground. He's thankful that Mitsuki's car is outdated and powered by gasoline, wondering if it's just a stroke of irony or the whim of the mountain gods. Summoning Heaven's Door, Rohan writes on the burs to shrivel up until they're hollow, then suck up fumes from the exhaust pipe of Mitsuki's car, and finally stick to the eco-terrorist's clothes. After the burs do so, the man falls unconscious due to the carbon monoxide released from all of them. The police officers finally arrive and approach him.[1]