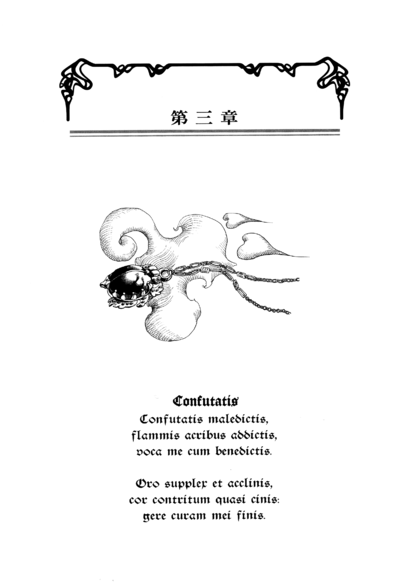 Koichi Hirose is in a second-hand bookstore with another classmate (most likely Toshikazu Hazamada). As they're in the bookstore, Koichi asks about the red marks on Hazamada's arms. He says that they were self-inflicted for some unknown reason, and then promptly falls unconscious when Rohan Kishibe walks into the room. After using Heaven's Door to read Hazamada, he finds out that a set of sentences has been written in someone else's handwriting. This set of sentences keeps talking about how Hazamada must keep scratching himself. 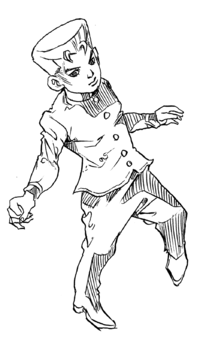 As they look for more clues on Hazamada, Koichi and Rohan discuss the Orikasa Hanae case even further. They also discuss Tomoko Higashikata's "suicide", who when questioned about what had happened to her, she says that she compulsively stabbed herself with scissors. Luckily, Josuke Higashikata's stand, Crazy Diamond, was able to heal his mother in a way that there would be no scars left. Koichi asks Rohan to erase the memory from her mind, which Rohan agrees to. They both leave the bookstore shortly after.

Akari decides to tell Oogami about the fact that she's pregnant with his child, but Oogami still leaves her in the alleyway. Oogami does throw a few books about pregnancy down, and Akari's mental wellbeing starts to worsen a bit. She considers a self-abortion, suicide, and other such matters, until the fetus inside her body started to move. She no longer felt as lonely as she once did, and Oogami started to allow her more items, like a gas stove to heat up water during the winter. After a few months of Akari's ordeal has passed, she encounters the same cat she saw when she was first in the alleyway. Akari puts her letter between the cat and its collar, and the cat leaves the alleyway.

Koichi and Okuyasu Nijimura are standing outside school, looking upon a heap of horribly deformed school desks and chairs. Okuyasu reveals that this is all of Josuke's handiwork, who has been extremely angry after the "suicide" of his mother. Koichi talks about how Rohan Kishibe discovered a clue about how the culprit would have seen "swings" and a "slide" through a window when he was younger. After a month of looking for the stated locations, with at least twenty parks in Morioh, there wasn't a single lead.

The school year comes and goes, with Okuyasu horribly failing his end of term exams. March 17, 2000 was the school's closing ceremony ending and Josuke and Koichi are walking to the bus terminal to head back home, due to the amount of snow making it unreasonable to walk. At this point, the book takes a small diversion to discuss Josuke's Savior. During this bus ride, they both spot a park, close to an orphanage. The duo get off at the next stop, and go to investigate the orphanage.

Chiho Futaba and Takuma Hasumi are going to Chiho's house to meet Chiho's father for dinner. Chiho's dad had previously told her to bring her boyfriend so he could meet her. When he enters the house, Takuma takes off his shoes as a courtesy. Chiho notes how both her boyfriend and her father have the same shoe size. Chiho's father walks to them, gets fake-angry at Takuma, after eventually chumming up with him. Takuma bows to her father and says that he hopes that they'll have a very long chat sometime soon.

Due to the Japanese New Year, Akari Hirai is in a very silent place. One day, a woman comes to speak to her from the roof of the building, and talks to Akari in the alley. The woman drops down a bundle of bills and says that if Akari lets her have half of the funds in the bag, she'll let her free. Akari realizes that her letter had stated that she had a large sum of Oogami Teruhiko's money, but not the exact amount. She catches onto one of the woman's statements: "Half should be enough to buy a nice house in Morioh". Due to this sentence, she figures out that this whole thing must be another one of Oogami's traps, because the woman came there already knowing the exact sum of money in the duffle bag.

As the woman returns with a rope ladder, Akari starts to climb up the ladder. She notices that there isn't a draft of wind as she rises in elevation. However, once she gets to a certain point, she realizes that she can't head all the way up to the roof. If she were to get to the top of the roof, she wouldn't be able to get away with her life. The reason for this is because the money was in the alleyway the whole time. On the night that she was pushed into the alleyway, she had tried to throw the bag of money across the gap between the two buildings in order to make the whole accusation process go a bit smoother, but she failed terribly and had it fall into the alleyway. She decides to keep going up the alleyway to lie and escape at some point, but Oogami comes and shines a flashlight at her face. After telling Akari and the woman that he could smell Akari's plan from a mile away, he threatens to cut the ladder if Akari doesn't descent down the rope ladder herself.

Scared for the baby, Akari's heart turns to lead as she descends the ladder step by step. The woman reveals that she was the real owner of the cat as she leaves, and reveals herself to be Orikasa Hanae. Orikasa also says that she married Oogami just recently. As the couple leave the roof, Akari is left in a shroud of darkness. 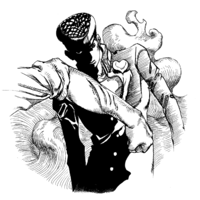 Josuke Higashikata and Koichi Hirose are in the orphanage, waiting to talk to the director of the orphanage. All of the kids are still looking at Josuke in awe, as he helped heal a girl's scraped hands on his way into the orphanage. Another thing they notice as they wait is that only the orphanage staff are allowed to give scissors out to the children. As the orphanage staff member walks back into the room to deposit the scissors back into a drawer, as well as sign it back in on a sheet, Josuke questions her about the strict security over a pair of scissors. The staff member retells the story of how a child stabbed both of their arms with scissors a few years ago. As they meet with the orphanage director, she asks if they are friends with Takuma Hasumi based on their questions about the car accident and the scissors. She doesn't divulge much more about him, but she states that the clock they came looking for was removed 7 years ago due to damage. Josuke and Koichi have finally narrowed down their suspect to one person: Takuma Hasumi.

A baby lays down on the ground as two adults stand over them. The woman talks about how the horse-shaped birthmark on the baby is the same as the man's. This is what Takuma Hasumi is reading about in his book. Baby Takuma remembers a very special golden brooch on the woman, upon which an older Takuma decides to act on. Takuma finds out that this brooch is hand-made, with only 10 of them ever being sold. Takuma eventually finds Orikasa Hanae through this method. He finds out that Orikasa Hanae met with a very secretive man once a year, and after overhearing their conversation, he is able to confirm that Orikasa Hanae was the woman who left him on the orphanage steps all those years ago.

On January 3, 2000, Takuma Hasumi calls Orikasa Hanae over to the window, telling her to come over and look at his own horse-shaped birthmark. Orikasa approaches him nervously, and only her cat is able to witness what happens. The true nature of Takuma Hasumi's stand is revealed, the exploitation of "Empathy". Although normal humans can not see The Book itself, they can perceive it, and can empathize with it. Due to this exploit of Empathy, the senses of the memory goes straight to the reader's consciousness. In Orikasa's case, she emphasizes by getting by a phantom of a car. The cat runs away from the scene, but Takuma's stand doesn't work on cats. The target must be able to read Japanese for them to empathize with it.

Takuma talks about how if Orikasa hadn't started to look for the baby she left on the steps all those years ago, she would have lived. It's assumed that Orikasa only started to look for Takuma due to the fact that she was rendered infertile due to a hysterectomy to get rid of a tumor. Regardless of the reason, Takuma doesn't care. It was a planned murder, and he left Orikasa in her home to bleed out to death.

As Takuma Hasumi is eating dinner with Chiho Futaba and Teruhiko Futaba (Teruhiko had changed his name before Chiho's birth), they are all having a pleasant conversation. As Chiho goes to her room to print out her manuscript of a book she was writing, Teruhiko and Takuma are both standing in the kitchen. Takuma had been to Teruhiko's house before, watching Chiho grow up, his sister from another mother. As Takuma walks around the house, he notes very expensive and lavish decorations while Teruhiko gushes about spending money on his daughter.

Takuma decides to consult his stand, The Book, to look up more information on Teruhiko. However, Teruhiko can truly perceive the notebook as being a notebook, and Takuma immediately starts questioning Teruhiko about "mysterious powers". Teruhiko talks about how fortunate he has been in his life, and starts talking about a bad situation he had at work. He reveals the nature of his stand's ability, the ability to isolate all human contact from a specific area. He says he hid something in this specific area, and no one else but him could approach it. After a while, he reveals that a "yapping dog" had been kept in the alley, and if anyone heard it "bark", he would lose his job.

After all of this information was told to him, Takuma makes the most out of time with Teruhiko. Takuma had been waiting for this moment for five years. After a short pause, Takuma tells Teruhiko he wants to ask for Chiho's hand in marriage. Right after however, Chiho's manuscript finishes printing, and Takuma says it was a joke. Takuma then leaves the house with Chiho, and after talking about her manuscript for a bit, Takuma decides to test to see if Chiho can see The Book. Chiho can not, meaning that she doesn't have any stand powers. Takuma gives Chiho a necklace made out of jet, and leaves. Takuma walks away, satisfied with what he has done. He didn't want to kill Teruhiko, not out of mercy for his father's life, but because he wants to make him live with what he has done.

As Chiho Futaba walks back into her house, Teruhiko Futaba tells her to not see Takuma Hasumi anymore. Teruhiko tells Chiho about his stand, "Memory of Jet", and then notices the Jet necklace around his daughter's neck. Saying "it's over…" are presumably his final words, as according to the Prologue to the book, Chiho Futaba would use a kitchen knife to fatally stab him in the chest and then burn their house down shortly after. 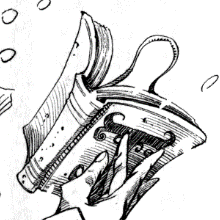