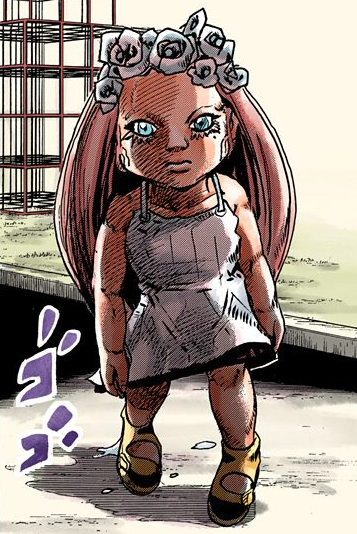 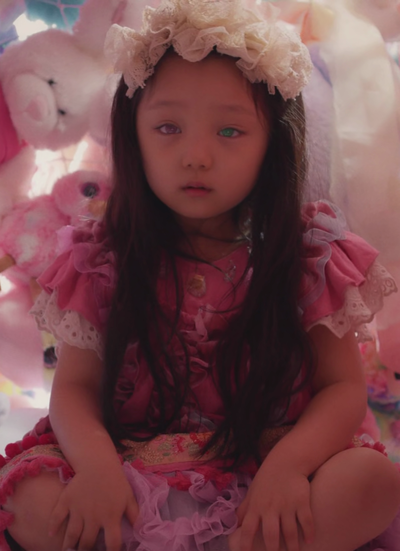 Mao Katahira (片平 真央, Katahira Mao) is a character from the one-shot Thus Spoke Kishibe Rohan - Episode 8: Deoxyribonucleic Acid. She is the daughter of Mai Katahira.

Mao is an unusual young girl that wears a small white dress with roses on her head.

She has no eyebrows, no upper eyelashes, thick lower eyelashes and sideburns that grow to her jaw. On her rear is a small tail (approximately 5 cm long).

In the TV Drama, Mao lacks most of her attributes and mostly looks like a normal little Japanese girl with long black hair, with the exception of her heterochromia, with her left eye being bright green while the right eye is purple. She wears a frilled pink dress mixing blue and pink frills, as well as a frilled pale yellow headband.

The series is known for alternating colors between media, the information presented below may or may not be canon.
Skin(Fair)
Hair(Peach)
Eyes(Light Blue)
Outfit
(White Dress, White floral headband, Light Yellow shoes)

Mao is an agreeable and playful child. She is constantly seen playing with other children at the park, not bothered in the least by her appearances and other quirks. Although she doesn't talk often, she greets everyone she meets.

Despite only being a child, Mao seems to have pushed things so that her mother would meet her biological father.

In the TV Drama, Mao is a more capricious and withdrawn child, explained because her mother kept hiding her from others. She thus developed a habit of burrowing into things and cover herself, notably building herself a tent made of plushies in which she nearly constantly hides.

Mao's gift in the TV Drama

Mao is only able to speak in reverse and, according to her mother, has never spoken normally in Japanese. However, when she meets her biological father, she begins to talk normally with him. When she walks, her footsteps are silent and everything she steps on becomes soaking wet.


Mao's heart takes the form of a tail which instinctively camouflages her body when touched, blending into its surroundings. According to Heaven's Door, this could be considered a visible Stand ability and not a genetic trait. In the TV Drama, this ability to disappear is theorized by Rohan as a power to create illusions and give the impression that she isn't visible, instead of Mao actually becoming invisible. Rohan also says that this ability was caused by Mai wanting to keep her hidden. 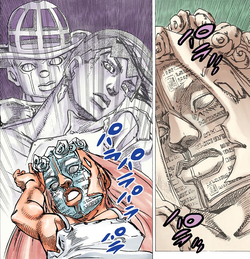 Mao was conceived through an anonymous Sperm donation from Obanazawa to Mai.

Nothing about her life is known, but it can be inferred that despite her deformities, Mai still loved her and she lived a calm life free of bullying. At one point she befriended Tomoya, Obanazawa's son.

Mao is presented to Rohan Kishibe by Yukako Yamagishi at the beginning of her story, but upon examination he does not find anything wrong with her, as she is born the way she was supposed to be. He thus takes his leave without trying to turn Mao into a normal human.

Later, Mao plays a prank on her mother by shedding her skin and disguises Tomoya as herself, frightening Mai who then rushes toward Tomoya and Obanazawa. It is implied that she did it so that her mother and Obanazawa could properly meet each other.[1]

Mao's backstory remains largely the same in the adaptation although with notable changes to the current story.

Prior to the events of Deoxyribonucleic Acid, Mao's father Akira Katahira died in a car crash while her mother was pregnant with her, so she was not conceived through sperm donation. Because of the drama's omission of Obanazawa and his son, Mai instead meets her "father" through Taro Hirai, who was the recipient of Akira's organs after an accident.

One day, Mai brings Mao out on a stroller, making sure that the folded cover hides her from the sun. When Mao points the way to the park, Mai hurriedly hides her hand. Incidentally, Kyoka and Taro cross paths with Rohan at the same place. While Rohan and his editor argue, Mai passes near Taro and Mao pulls Taro's shirt, saying "Hello" in reverse to him. Unfortunately, the tug makes Taro fall and bump his head on a wall. While everyone else goes to a hospital to have Taro treated, Rohan is intrigued by Mao's eyes.

At the hospital, Kyoka and Mai learn that Taro's injury is fortunately not serious. When Mao grabs his arm again, Mai is embarrassed and goes away as quickly as she can. Taro is brought back into his hospital room for further examinations. Rohan and Kyoka are intrigued by Mai's nervousness. Back at Mai's apartment, she scolds Mao for her "dangerous" actions, seemingly upsetting the little girl. Mao quickly runs inside of her plush tent. Soon after, Mao meets Rohan, who turns her into a book to read her. When Rohan is done, Mao exits the tent and plays in a corner. Disappointed, Rohan concludes that there is nothing wrong with Mao. Her appearance comes down to genetics and her quirks of character are just her personality. Mai wants Mao to be made normal, but Rohan calls her out about her definition of normality and declares that Mao was born the way she is and that it is "normal". Mai says that she will be bullied, but Rohan shrugs it off. While Mai wants a second examination, Rohan wants to leave. Mao becomes upset when Mai tries to take her and then runs away and disappears in front of Rohan and Kyoka's eyes, shocking them. Rohan discovers that Mao has a gift like him, and theorizes that she can create illusions and camouflage herself. Mai searches for Mao in the apartment and Rohan reveals that he at least knows that Mai's obsession with hiding Mao is the cause of this ability. Suddenly, Mao opens the front door. The three realize she's gone out but they lose her trail.

At the park, Taro is sitting on a bench and tries his camera. Mao then appears to him and greets him. Taro quickly understands Mao, and they bond with each other. When Rohan, Kyoka, and Mai arrive at the park, Mai hears Mao laughing and is relieved when she sees that Taro is playing with Mao in the playground. Taro is also unusually lively and happy with the little girl. Likewise, Mai is awed that her girl is now smiling and laughing. Taro meets Mai and asks for Mao's name. At the same time, Mao runs off and is almost run over by a car. Thankfully, Rohan manages to catch up to Mao and lifts her out of harm's way, due to his athleticism. Curious, Rohan turns everyone into books. He thus confirms the true nature of Taro's link to Mao and Mai.

Later, Taro, Mao, and Mai walk together, relieved that Mao is well. Mao says she's thirsty and Taro buys her a can. All three walk away, holding each other's hands.