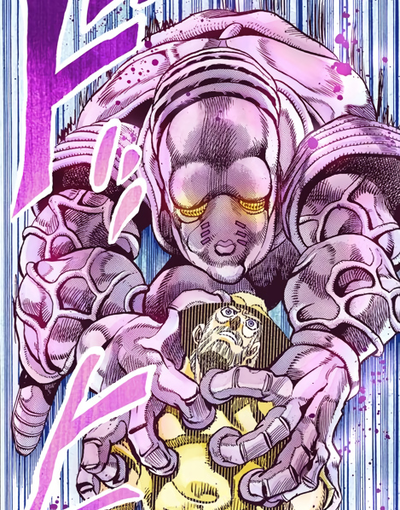 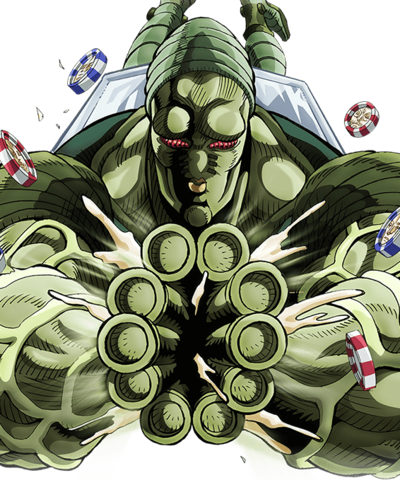 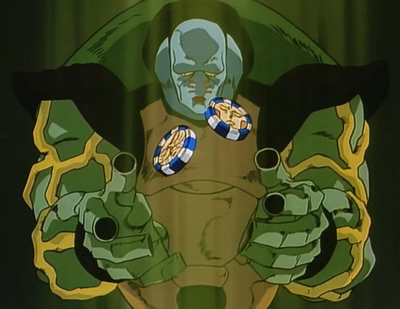 It is a hulking humanoid Stand capable of stealing souls of those who lose a bet or those who admit defeat, and storing them as poker chips. 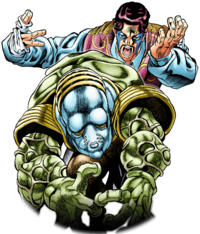 Osiris is a humanoid Stand with large, muscular arms marked by lines of a vascular pattern, a thick brow and fingers capped by suckers. It is only revealed from the chest up; mist obscuring its possible lower half. The design is a fusion of an African-style design with mecha elements.[1]

Osiris represents the Egyptian God Osiris, related to prosperity and life after death.

Osiris is an Automatic Stand that supplements Daniel J. D'Arby's skills as a professional gambler. As long as D'Arby's opponent agrees to his rules, Osiris can steal the opponent's soul with quick and simple bets, which D'Arby can also manipulate to his advantage in order to succeed. Consequently, Osiris together with D'Arby's cunning skills and exceptional memory is a dangerous pair, nearly capable of defeating the entire Joestar Group.

Osiris has the ability to rob the soul of anyone who loses to D'Arby in a bet or in a game.[2] Firstly, D'Arby needs his opponent to agree to gambling their soul,[3] and it specifically only acts when the opponent "admits defeat in their heart".[4] If the loser bets the soul of another person, Osiris can take it even if that person is not present or agrees to it.[5] Cheating is also allowed when gambling against D'Arby, since he deems cheating acceptable as long as you aren't caught.[3]

When souls are stolen from a body, it will no longer have a pulse and falls into a dead state unless D'Arby returns the soul to them.[3]

Enlarge
Transforming a soul into a poker chip

The souls are compressed by Osiris's hands and stored in the form of poker chips,[3] which D'Arby keeps as a collection. D'Arby is free to gamble individual souls[3] or even split a chip into several blank pieces to be used in a game, with all of the parts being equal to one soul.[6] If he recognizes defeat, the souls he's gambled are released.[7] He is also able to release any number of the souls he currently has at will.[7] However, if D'Arby dies then all of the souls he's collected will die as well.[3]