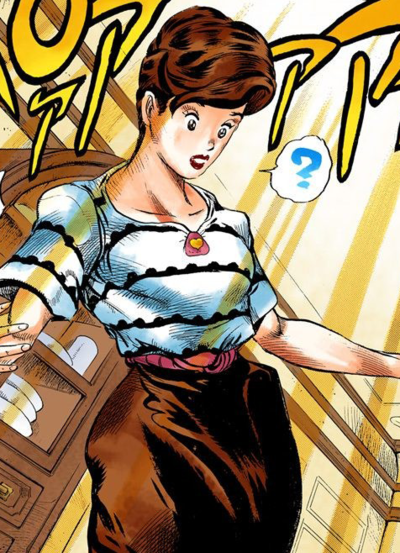 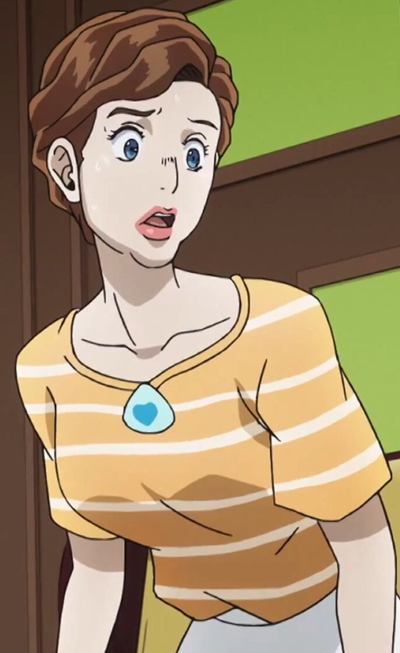 She is the wife of Mr. Hirose and the mother of Ayana Hirose and Koichi Hirose. She is tricked into believing Tamami Kobayashi's lies about her son, causing her guilt to amplify due to Tamami's Stand, The Lock. 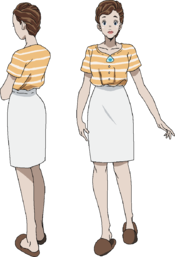 Mrs. Hirose has dark, wavy hair styled as a pixie cut swept to the side. She has moderately thick eyebrows that are slightly arched upwards, and she is always seen with lipstick.

During her encounter with Tamami Kobayashi, she wears a striped blouse, a skirt, and slippers. The blouse's collar has a triangular brooch with a heart on it. When she goes shopping later on, she is wearing a long-sleeve blouse, a vest, and pants. She also has earrings on. 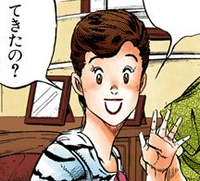 Koichi's mother is a cheerful, lively woman. She is welcoming to visitors, seen being open to conversation with Tamami and defending him when Koichi rushes in.[3] In general, she is cordial to strangers and gets along with them well.[4]

She can be somewhat gullible as she believes what Tamami tells her, even when he has to correct a lie about talking to someone with a broken jaw.[3] Although initially succumbing to his manipulation to the point of wanting to commit suicide, her love for her son, who she affectionately calls "Ko-chan," triumphs. In her heart, she trusts her son over anyone.[5]

After getting married to Mr. Hirose, they have their first child, Ayana, in around 1981. In 1984, they have their second child, Koichi. At some point, they adopt a dog into the family named Police. 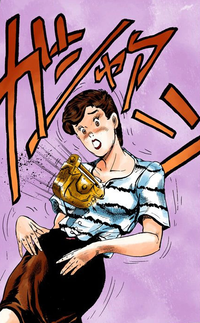 Affected by The Lock due to her guilt

Echoes imprints "Believe me!" on her

Mrs. Hirose and Ayana are out shopping when they stumble upon Koichi and Rohan. Surprised to meet a famous mangaka, she calls him amazing and requests to come with them to Kameyu Department Store. Yukako is frustrated that of all people, Koichi's mother had to show up because she had hoped to be alone with Koichi. They also meet up with Josuke and Joseph along the way. While at the store, the flash of Rohan's camera startles Shizuka. Joseph panics and rushes through the crowd as the baby starts turning invisible, which surprises Mrs. Hirose.[4]

Mrs. Hirose tells Koichi to take their dog Police for a walk. Before he leaves, their phone starts ringing and she yells at Koichi to answer it because she's in the bathroom.[7]

In the anime adaptation, she and Ayana are outside Kameyu when Ayana tells her that she just saw Koichi holding hands with a really pretty girl. Mrs. Hirose is shocked because Koichi never told her anything.[8]