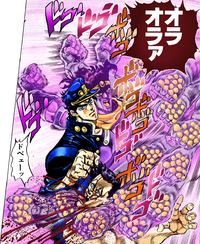 A number of Stands and/or their users make a battle cry while executing their basic mode of offense; informally described as a Stand Cry.

The cry is suggested or depicted as being made in a similar rhythm and intensity with the attack of the Stand, which is usually very rapid, strong, and unbroken.

The Stand Cry is among the trademarks of JoJo's Bizarre Adventure, as many central Stand users have one.

; in which protagonist Kenshiro

(in a style after film star Bruce Lee

The most popular and common cry, "ORA ... !", originates from noises in progressive rock songs that Araki liked, like from Pink Floyd's Dark Side of the Moon, which he wrote down phonetically. Meanwhile DIO and Giorno's cry, "MUDA ... !", is the Japanese word for "useless" while the "Wryyy"s come from noises Araki heard in Horror movies, like Psycho. Others come from English and Italian.

Earlier in the series, in a style common to action-oriented manga, certain characters would scream the names of their attacks (including Jonathan Joestar, Joseph Joestar and Dio Brando); so it is possible that the Stand Cry follows from this.