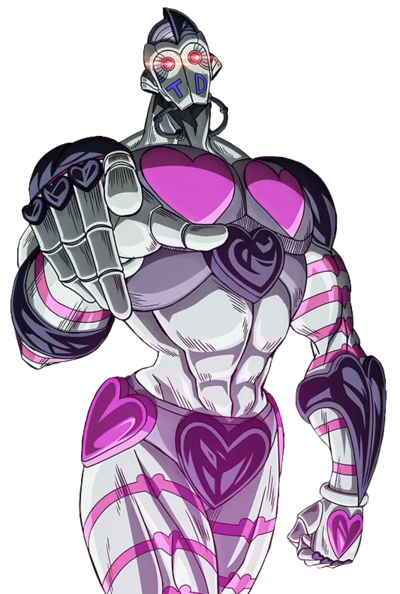 It is a humanoid Stand with mechanical features endowed with two abilities: to steal the souls of people who lost in a game against D'Arby, and to observe a person's soul to partially guess their intents.

Atum resembles a humanoid robot with Telence's athletic build, and, in a similar nature to The World and Cream, is decorated with heart motifs on its body. On its face are Telence's initials, along with what appears to resemble a breathing apparatus. The apparatus has two nozzles that periodically spray out steam. Its appearance is modeled after a military robot.[1]

Much like his brother's Stand, Osiris, Atum's primary ability allows Telence to steal souls from someone who has recognized defeat[2] in a game, which Telence typically uses in video games.

Like Osiris, the victims must pledge their souls first, but Atum is subtle enough to partially grab hold of the soul from someone taken by surprise. In one instance, it was able to grip Jotaro's soul without being able to steal it when Telence guessed a punch correctly.[2] In theory, Atum is then free to attack the associated body part but was never seen doing so.[2]

Stolen souls are put inside specially-made dolls from Telence himself, and he, too, is free to gamble and release the souls under his control.[3]

In effect, he psychically asks a nearby person's souls a yes or no question which the soul is obliged to answer, unbeknownst to the one being read, allowing Telence to secretly guess someone's intent.[5]

Atum visualizes a person as if through an infrared detector when reading souls and if the person lies, the color of their aura changes, allowing him to determine that they are lying.[5] When Atum detects a "Yes", the subject's aura flares up; when it detects a "No", the subject's aura points vertically.[6][7] Telence is also free to examine several people at once[3] although he may forget about them.