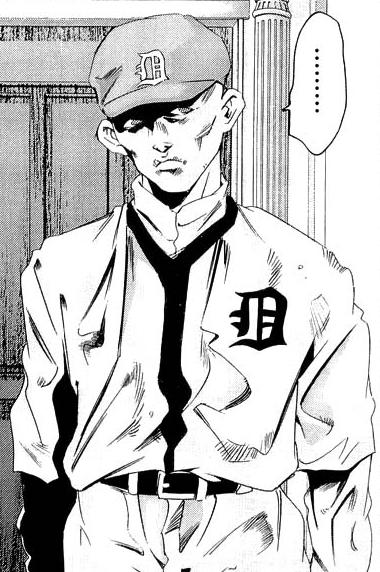 He is an American Major League Baseball player who played for the Detroit Tigers. Over the course of his career filled with controversies, he earned a place in the history of baseball as one of the greatest. Ty Cobb's unmatched skill and fierce personality led many to believe that he is possessed by a vengeful ghost.

Ty Cobb is a man of average height and build. He has short hair and pronounced cheekbones.

He is usually depicted wearing the uniform of his team.

Ty Cobb enraged after being insulted.

During his childhood, Ty Cobb, due to his upbringing, was an honest boy. He was also very athletic and preferred hunting and baseball over studying. After the death of his father, Cobb's personality radically changed, as he became more arrogant, aggressive and violent.

Ty Cobb is infamously confrontational. Whenever he is faced with anything he deems insulting or disrespectful, he responds with extreme aggression, often resorting to violence.

Ty Cobb often displays extreme arrogance. His tendency to put himself above others is fueled by his great skill and an overwhelming number of accomplishments.

Ty Cobb is considered to be one of the greatest baseball players of all time. He was one of the first people to study the sport from a scientific point. Ty was also adept at recognizing unique habits that pitchers had in their posture.

During his career, Ty Cobb had set multiple world records: 892 stolen bases total (unbroken for 50 years), 92 most stolen bases within a season (highest record for 60 years), .367 batting average. He has also led the American team in batting for 9 years in a row, 12 times in total.

Ty Cobb as a baby with his parents.

Tyrus Raymond Cobb was born on December 18th, 1886, in the state of Georgia. He was raised in an affluent and religious home and was an athletic boy who preferred hunting and baseball over studying. His father vehemently opposed Tyrus's interest in baseball, as he considered the sport to be vulgar. Ty's father was killed by his wife in 1905. That event significantly affected Ty Cobb, dramatically changing his demeanor, making it arrogant and aggressive.

In 1908, during a game against Boston Red Sox, Ty Cobb declares that he will steal second base on the next pitch. As he approached the catcher on second base, the catcher's arm suddenly started to bleed profusely. The catcher accuses Ty of cutting him with his cleats, to which Ty Cobb responds by saying that he'll steal third base, too.

Ty Cobb's attitude made him hated and feared even among his teammates. One day he was ambushed by 7-8 other baseball players, but, since Ty Cobb carried a shotgun in his baseball bat case, the people who tried to mug him ended up being the ones who were mugged.

Ty Cobb being suspended from baseball.

During one of his games, Ty Cobb hears a voice coming from the crowd of spectators shouting insults at him. After spotting the spectator, Ty Cobb, in a fit of rage, rushes to the man's seat and starts mercilessly beating him. For assaulting a spectator, who also happened to be paraplegic, Ty Cobb gets suspended from baseball indefinitely. The suspension is called off after only a day due to Cobb's teammates going on a strike. Although they were rumored to be threatened into doing it, his teammates have officially stated that the reason for the strike was Ty Cobb being irreplaceable for the team.

In June 1912, in the game against Philadelphia Athletics, Ty Cobb plays against Hollows, a pitcher who keeps a small file in his glove that leaves scratches on the baseballs, giving them an unusual trajectory when they're thrown. After missing yet another ball, Ty Cobb gets frustrated and calls a time out, during which he starts taunting Hollows. After the time out ends, during a pitch, Hollows throws the baseball at Ty Cobb's stomach. Enraged, Cobb pulls a gun on him, causing a brawl involving all of the players present on the field. This incident convinced Hollows that the rumors of Ty Cobb being possessed by a vengeful ghost are true.

Ty Cobb was always careful with managing his finances; he established the basis of baseball contract dealings and was able to amass an enormous fortune by investing in Coca-Cola and General Motors. Despite his wealth, Ty Cobb refused to pay for electricity because he thought that electric companies charged too much. He once lost his house to a fire from using Edison's early inventions to save on electricity, yet he still refused to pay for it.

Later in his life he was diagnosed with cancer and eventually was put into a hospital. With Ty Cobb lying in his hospital bed with a gun under the blanket the doctor asks him to hand over the gun. Cobb tells the doctor to take it himself to see who's faster while reaching for the gun. After the doctor exits the room, Ty Cobb calls him a coward. He tells his butler that they should leave hospital because no one can cure him.

To his relatives Ty Cobb left his vast fortune. He built a mausoleum for himself in his hometown, where only he was allowed to enter. Tyrus Raymond Cobb passed away on July 17, 1961 at the age of 75.