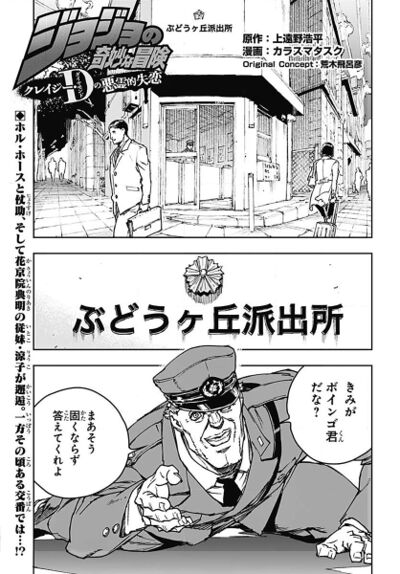 At Budogaoka Police Station, Ryohei Higashikata tries reaching out to Boingo, who is hiding under a desk. Ryohei asks how he got lost and Boingo mumbles in response, though Ryohei manages to understand him. He learns that Boingo was searching for a parrot with a man named Hol Horse, then dropped his comic book right after arriving in Morioh and got lost searching for it. The other police officers praise Ryohei's ability to understand him so easily. Meanwhile, Boingo thinks back to the last pages he read in Tohth. His Stand thanked him for reading and being the comic's number one fan, but as fate foretold, he must part ways with the book for some time. Tohth also mentioned that Boingo has to throw away the book himself after gaining the confidence to graduate from being DIO's underling. Boingo says that although he definitely didn't throw it away himself, the book's predictions can't change. He also tells Ryohei that the book isn't really his and he's just looking after it.

Ryohei asks his co-worker, Karaiya, to get Boingo back to his hotel safely. Before Karaiya leaves with Boingo, the phone rings and they get a police report about Inspector Hiraoka's car going out of control and crashing into a store. The police officer also mentions that the report described a student at the scene that sounded a lot like Josuke, causing Ryohei to speed out of the police station with his bicycle. After he leaves, the other police officers talk about Ryohei to themselves. They wonder why Ryohei has been stationed at the same place for his whole career without a promotion despite his passion and managing to arrest Anjuro Katagiri. They assume Ryohei's lack of promotion might be due to him having an illegitimate grandson from his daughter being a foreigner's mistress while she was in college. Karaiya hopes Ryohei will be rewarded for his hard work someday.

Ryoko recalls the pages she read in Tohth. It described how Ryoko thinks she hasn't changed at all since she was seven years old despite people calling her really mature. After all those years, she can only think about her cousin Noriaki and wants to know why he got killed no matter what. The book also revealed that Josuke is the key to solving the mystery and Ryoko wonders how a delinquent could help her like that. Josuke calls out to Ryoko, angry that she indirectly insulted his hair as well. In response, Ryoko asks Josuke if he based his hair on the Nexus-6 model replicant lady from Blade Runner since it doesn't look like a standard pompadour. Josuke doesn't understand and asks her to clarify whether that's an insult or compliment. However, Hol Horse interferes and says Josuke should cherish ladies instead of threatening them. He brings Josuke close toward him and whispers that he can tell how powerful Josuke's Stand is and that he shouldn't just summon it every time he gets angry, as Hol Horse doesn't want to keep getting caught up in Josuke's fights. Josuke calms down, excited to learn the term "Stand".

Hol Horse steps away from Josuke and asks Ryoko if she can understand his Japanese properly. Although he would like to apologize by taking her out for dinner, he has business to take care of. Ryoko is confused but Josuke explains how Hol Horse got separated from someone he came to Japan with. Hol Horse describes how Boingo is short and carried a comic book, asking if Ryoko saw him anywhere. Shocked, Ryoko clutches her bag with Tohth inside and hides it behind her. She tells Hol Horse that he should ask at the kōban (neighborhood police station). Josuke doesn't like that suggestion and hides behind a vending machine, causing Hol Horse to wonder if he's hiding from the cops.

While Hol Horse leaves and Josuke hides, Ryoko takes out Tohth again, realizing it must be the book Hol Horse mentioned. She doesn't want anyone to take it away from her until she learns the truth. New pages then emerge, telling Ryoko to slap Josuke in the face in order to learn the first hint toward Noriaki's death. Josuke interrupts while she's reading by grabbing her hand and yelling at her since he doesn't want his grandpa to see them. He asks why she's still following them and tells her to leave. Amused, Ryoko asks Josuke whether he's trying to avoid his grandpa while he's on police duty. Josuke doesn't like her tone and calls her a highschooler, causing Ryoko to explain how she just graduated from high school in spring and is only wearing her uniform because she got back from visiting a grave. She calls Josuke a hypocrite for wearing his uniform already when he won't even be in high school until next month. Josuke rants about how Ryoko talks like she's above everyone else and asks which actor Ryoko copied her hairstyle from. Ryoko ends up slapping Josuke for insulting her cousin but Josuke smiles in response. He thinks this attitude fits her much better and asks Ryoko if she feels relieved now.

Hol Horse feels like he can finally concentrate and look for the parrot and Boingo, but thinks he might need Josuke's help to deal with the mysterious Stand. Inside the police station, Hol Horse overhears Inspector Hiraoka insisting that the car crash wasn't his fault. His co-worker tries to calm him down by getting him to sit and have tea, while Hol Horse is surprised to learn that the possessed driver was a police inspector. Hol Horse then looks outside and suddenly sees the parrot and its Stand. Before he could react, Hol Horse starts hearing DIO's voice back from when he was about to betray the vampire by shooting him. Punched cards enter Hol Horse's body through his eye and mouth. Hol Horse finds himself unable to control his body and he is forced to point Emperor at Inspector Hiraoka's head from behind, in the same way he planned to shoot DIO ten years ago.