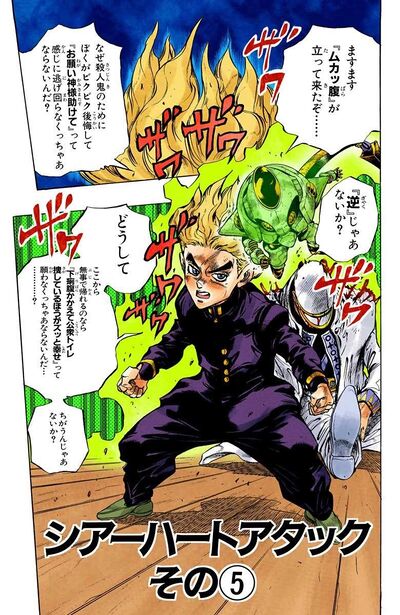 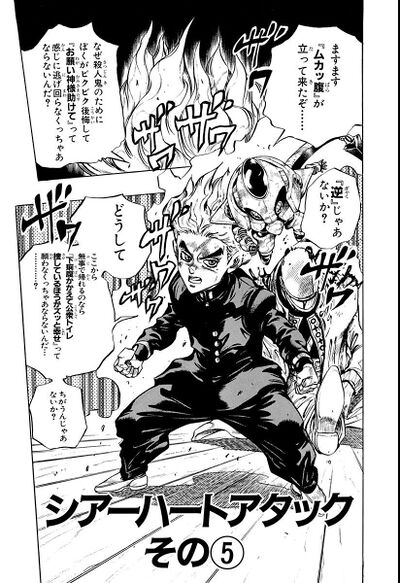 Now confident in his victory, Koichi has discovered Sheer Heart Attack's weakness. He sends Echoes ACT 2 toward the tank and plants a sound on it, using its relentlessness against itself. Meanwhile, Kira worries about his sub-Stand's performance, while still claiming that it has no weaknesses. At the shoe shop, Koichi has neutralized Sheer Heart Attack by planting a "sizzle" sound on it, making the sub-Stand blindly follow the artificial heat source like a donkey follows a carrot dangling from a stick. He uses the opportunity to call Josuke and tell to come help heal Jotaro. But suddenly, Koichi realizes that the electric stoves he turned on earlier are beginning to heat up, and provide a hotter heat source than Echoes' sound.

Sheer Heart Attack now rushes toward the stoves and explodes, destroying the back of the store while Koichi and an unconscious Jotaro narrowly escape. However, Koichi's back is injured and he cannot walk properly anymore while Sheer Heart Attack resumes its pursuit. Koichi doesn't see Echoes ACT 2 anymore but see its mold, realizing that it has evolved again: Echoes ACT 3 makes its first appearance, asking for Koichi's command.