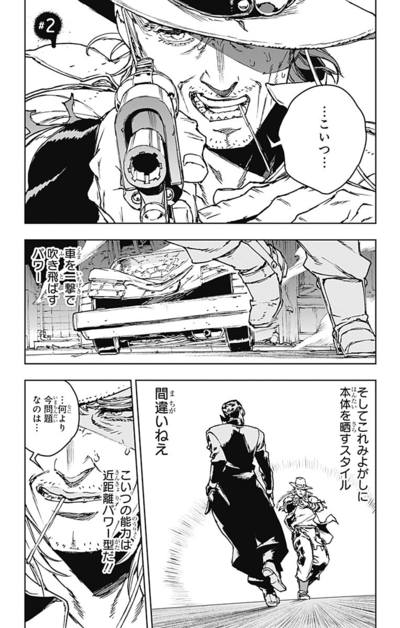 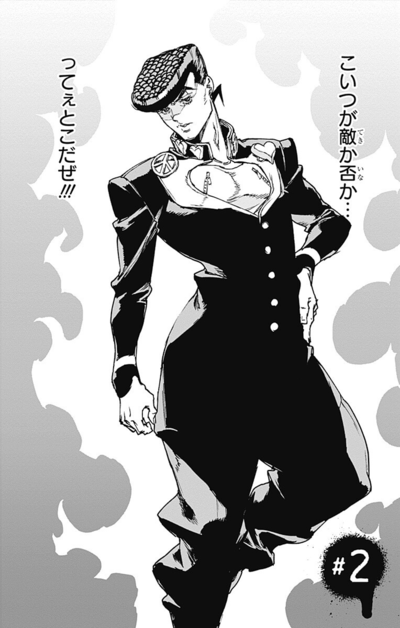 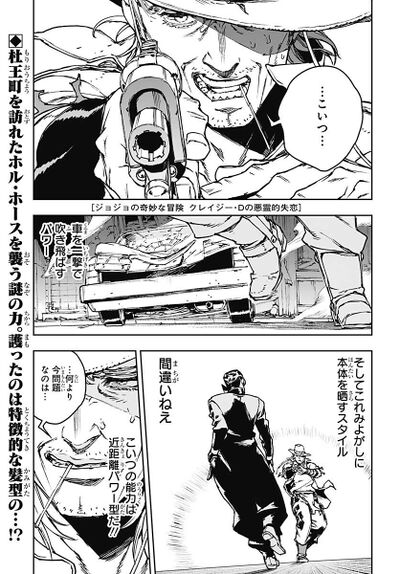 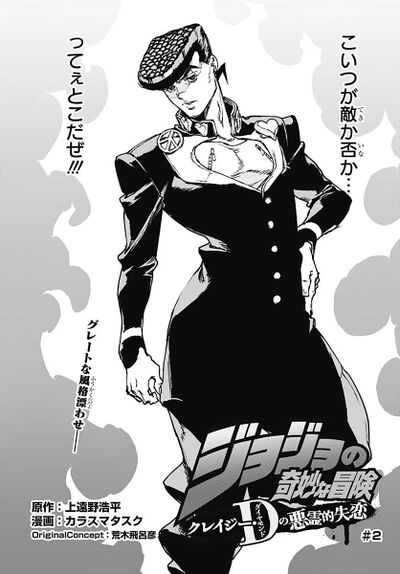 Hol Horse thinks to himself about Josuke's strength, determining that his ability must be a close-range power type, but prioritizes finding out whether Josuke is a friend or foe. Josuke mocks Hol Horse's fashion, wondering if he's a cowboy. Hol Horse retorts by asking if Josuke is the kind of person to pick his style based on what other people think, adding that Josuke doesn't seem like the type considering his hairstyle.

Hol Horse's remark enrages Josuke, so the cowboy quickly raises his guard. Suddenly, the driver from the car Josuke punched almost collides into Hol Horse from behind. Josuke uses Crazy Diamond to punch the driver in the face and then grabs the man by his tie. Hol Horse looks back at the car and is confused, as it appears to have a different design from when he saw it before. Josuke has a feeling he'll regret doing so, but heals the driver with his Stand, not wanting anyone to die during this accident.

As Hol Horse is surprised to see the man's wounds healed, the driver suddenly vomits out a set of punched cards on Josuke's shoes. The driver then regains consciousness and wonders what happened to him, while Hol Horse wonders if it was a Stand attack. Everyone who was hit by the car on the sidewalk regain their senses and get back up, shocked that they have no injuries. Hol Horse is stunned to learn what Josuke's true ability is, though Josuke reveals he didn't return everyone exactly to how they were before, such as the driver's nose now being wider.

Complaining that the driver puked all over his Bally shoes, Josuke starts rubbing his shoe with the man's suit. Hol Horse thinks to himself that Josuke reeks of danger, while the driver runs away screaming from Josuke. The crowd of pedestrians nearby assumes Josuke and Hol Horse caused the car to crash because of how they look, asking for someone to call the police. Annoyed, Josuke claims that this happens to him every time he tries helping people. He punches the ground with Crazy Diamond to scare the onlookers away, exclaiming afterwards that he isn't ashamed of who he is and if they have something to say to him then they should tell him directly. Josuke then turns around to get Hol Horse to agree with him only to find that the cowboy is nowhere to be seen.

Running away, Hol Horse thinks to himself that he would have no chance fighting Josuke one-on-one. He's also more worried about the other Stand User, which seems to have a remote-control type Stand that controlled the driver from far. Hol Horse surmises that the Stand User's motivation might be an inhuman urge to kill, just like DIO. Hol Horse declares that he has to hide and keep an eye on things from a safe distance so he can process everything he just saw. However, he is suddenly interrupted by Josuke who claims to have easily processed everything that happened already. Shocked, Hol Horse asks why Josuke followed him but Josuke just wanted to get away before his relative could show up at the accident scene. Hol Horse desperately tries running away and assumes Josuke is still following him until Josuke reveals that he simply hasn't moved at all because Josuke reverted the asphalt under Hol Horse's feet back into liquid.

While Hol Horse grieves over his boots, Josuke brings up Hol Horse's remark before about if Josuke is the kind of guy that bases his style on what other people thinks. That comment combined with how Hol Horse himself is dressed resonated with Josuke. The two introduce themselves to each other, much to Hol Horse's dismay as Josuke places his arm around Hol Horse's shoulder. Worried, Hol Horse wonders if Tohth predicted this too and wonders where Boingo is. Perked on a tree branch a couple houses away, a parrot observes the two of them with its Stand behind it and suddenly shrieks out.

Meanwhile, Ryoko Kakyoin looks at the sky, stating that she hates cloudy days. She takes out Boingo's book from her bag and contemplates taking it to the police. She thinks back to how Noriaki vanished after returning to Japan without saying a word to his family and then his corpse was found in Egypt. When she thinks that the book could have had something written about Noriaki in it, new pages showing Josuke start to emerge.

A thug parks his car in the middle of the road, blocking the way for other drivers. He complains about Yuya Fungami getting too cocky when an elderly lady walks up to him and asks if he can move his car. The thug furiously tosses his phone at the old lady, asserting that she made him miss part of an important call. Ryoko walks in front of the old lady and deflects the phone away with her bag, breaking it when it hits the ground. She tells the man that although he's clearly evil, he'd be better off parking somewhere else. Infuriated, the man yells at Ryoko for breaking his phone and asks if she's one of Yuya's girlfriends. However, the thug's girlfriend comments that Yuya only likes pretty girls.

The thug insults Ryoko's dangling hair, claiming Yuya wouldn't give the time of day to someone like that. Ryoko then smirks and asks if he was talking to the boy behind her, pointing out Josuke. Instantly, Josuke rapidly punches away the thug's car with Crazy Diamond. He then reshapes the roof of their car into a cage, as they're shocked as to what just happened. Hol Horse apologizes to Ryoko, asking if she got hurt anywhere. Josuke meanwhile constantly kicks the thug's car, provoked from his hair being insulted. Ryoko thinks back to the pages she just read in the book, amazed that its predictions came true. The power of Tohth is now in her hands and she's one step closer to finding out the truth behind Noriaki's death.

Author's Note
“
Now that I have a mortar and pestle, I hope the world will soon become a place where I can make mochi with peace of mind.
”
—Tasuku Karasuma
“
杵と臼を手に入れたので早く安心して餅がつける世の中になってほしい。
”
—Tasuku Karasuma