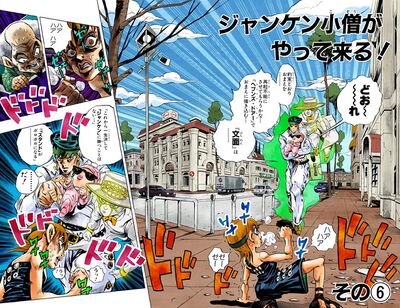 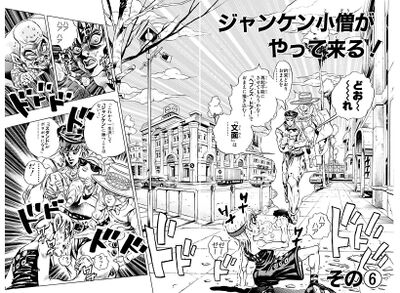 Rohan won the game of rock paper scissors against Ken by cheating and plans to make sure Ken doesn't win another game for the rest of his life. However, Boy II Man takes Shizuka hostage and demands another game since Rohan cheated. Rohan calmly accepts, and wins three rounds consecutively, throwing Ken off. Disappointed, Yoshihiro leaves and resumes his search for another Stand user.

As Rohan approaches to seal his ability to play rock paper scissors, Ken refuses to let his heart be controlled and jumps into the road while a truck is approaching as a means of killing himself. Rohan, interested in the child's courage, jumps too in front of the truck. Coincidentally, Yoshihiro's photo lands on the truck's front window, causing the driver to swerve in a panic. When Ken points out how reckless it was, Rohan remains unmoved, saying he won't take away Ken's Stand but have him promise not to use it anymore. The boy acknowledges his complete loss.

Josuke and Joseph then run toward Rohan, asking him if he's seen Shizuka. Rohan and Ken realize that they've lost the invisible baby and begin to search for her.