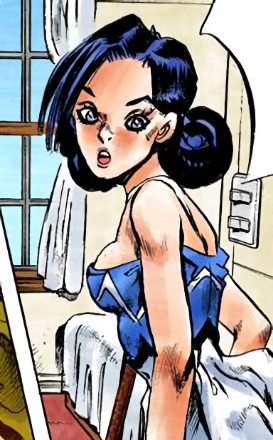 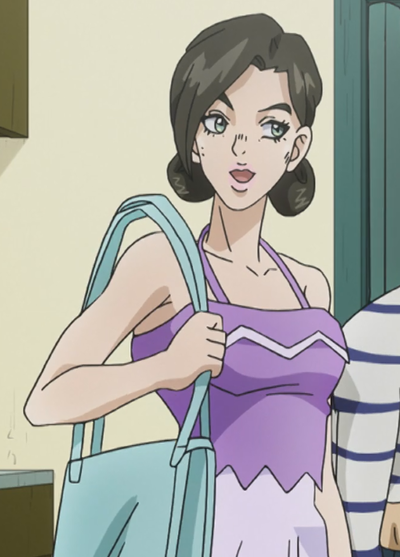 Blown up by Yoshikage Kira

Minako Okura (大倉 美那子, Ōkura Minako) is a tertiary character featured in the fourth part of the JoJo's Bizarre Adventure series, Diamond is Unbreakable. During an investigation, Hayato Kawajiri witnesses her and her boyfriend Satoru Nakae getting killed by Yoshikage Kira.

Minako is a 19-year-old woman of average height and petite build. She is described as a first-year student at S-City M Community College[1] and is usually seen carrying around a large purse. She has an asymmetric flipped-out short bob cut and her attire consists of a zig-zag patterned spaghetti strap tank top, ruffled miniskirt and a pair of high heels.

The series is known for alternating colors between media, the information presented below may or may not be canon.
Skin(Pale, pink lipstick.)
Hair(Blue)
Eyes(Light blue)
Outfit
(Blue tanktop with a black trim and white straps and a zig-zag pattern, white high heel.)
Skin(Pale)
Hair(Gray)
Eyes(Sea green)
Outfit
(Purple tanktop with a white zig-zag pattern, white skirt, baby blue high heels.)

Minako gives off the impression of a spoiled young woman who doesn't care for the well-being of others. She and her boyfriend, Satoru Nakae, are quick to assume Kira is a thief despite the latter merely pushing Minako's bag off his lap. They are also willing to quickly shift blame onto Kira for bumping into them despite their carelessness being the cause. Minako also seems to be in the habit of sneaking out at night, resulting in her father becoming worried about her.

Despite their behavior, she and Satoru are intimate together as a happy couple.[4]

Minako mentions that she would frequently sneak out of the house at night, making her father concerned and prompted into spying on her. Once Minako noticed him, she tried to teach him a lesson by stealing something on purpose just to let him see it. She subsequently ran away from home and moved in with Satoru. Though cut off from her father, she says that she still keeps in contact with her mother.

Minako is introduced as a young woman who is seen riding the train Kira takes home from work, complaining to her boyfriend, Satoru Nakae, about her father. As she tells the story about her running away enthusiastically to her boyfriend, they are unaware that Kira is sitting next to them, trying to control his killer instincts. Bothered by her bag being on top of his leg, Kira pushes it away, and the couple accuse him of trying to steal it.

As they get off the train, Satoru and Kira bump into each other, knocking Kira's possessions to the ground. Satoru yells at Kira again, and the couple proceed to mock his bowling pin nail clippers. Tired of the repeated confrontations, Kira follows the couple home.

Entering their apartment room, Minako asks Satoru to buy her a new pair of earrings, which he agrees. However, Kira suddenly barges in and blows up Satoru instantly with Killer Queen. Unable to resist his urges anymore, Kira forces Minako into cutting his fingernails, taking a liking to her hands. He then takes her boyfriend's ears and, to her horror, hangs them on her own, telling her that her boyfriend had left some earrings behind for her. He proceeds to use Killer Queen again to atomize her, leaving only her hand behind.[4]

Kira takes her severed hand as his new "girlfriend" and decides at first to take it with him to Kosaku's house; however, he is forced to destroy it after seeing Hayato leaving the scene with a camera.[5]

Jotaro Kujo visits her apartment during his investigation of reported missing people soon after Kira leaves. At the crime scene, he finds her bag and some blood left from her boyfriend.[2]