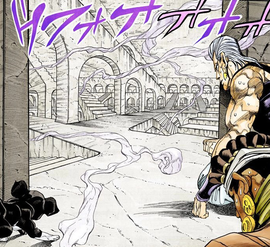 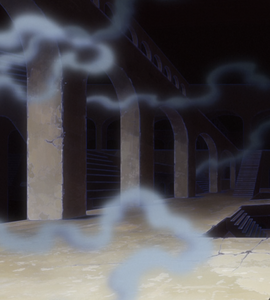 As a Stand that generates illusions and whose user was swiftly defeated, its appearance and personality, if any, are unknown.

It is one of the first Stands to not correspond to a tarot card or an Egyptian god and instead makes a musical reference.[1]

Thanks to its illusions, Tenore Sax may be a useful Stand, but was defeated too rapidly to determine any strength other than disorienting enemies. One weakness is that it doesn't create olfactory illusions, as Iggy's nose was able to detect Kenny G.'s presence.

Tenore Sax has the ability to generate illusions that can distort the inside of DIO's mansion, producing incomprehensibly large rooms or complex labyrinths. The Stand can replicate not only a specific area's appearance, but its composition as well; in the case of Telence T. D'Arby's island, the feeling of the water and ocean breeze were identical to the real thing.[2] To dispel the illusions, it is necessary to defeat its user, Kenny G.