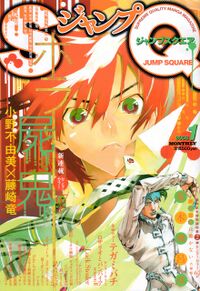 - As a creator, there's a certain drive to pursue things you don't know in order to improve your manga, right? Araki: Correct. For example, in my case, I like to go to the mountains and look for animal footprints. This includes examining traces of tree roots being eaten or soil that's been dug up. I'm not really into hunting, but I enjoy tailing animals up until the point before you're supposed to shoot them.

On a similar note, I also track and observe cats in my neighborhood. I know when they'll be passing through, so I'll wait ahead of time to ambush them. The cats that show up look so surprised when I do that (laughs). I really love that feeling.

- You usually do such things?!

Araki: Oh, yes. I'm also pretty happy when snakes show up (laughs). Snakes have human-like behavior. When they run away, they'll look back once to check if they're safe before leaving. That's why I think snakes have souls. They have a will. I'm interested in that kind of thing.

- I would like you to tell me about Part 4 in detail. Araki-sensei, what kind of work is Part 4?

Araki: In short, the theme of Part 4 is "building a city". It's meant to take JoJo's "mythical" story that its had up until Part 3, and drop it down into everyday life. Of course it's ordinary, but at the same time extraordinary. I wanted the "reality" in Part 4 to bring the story closer to the real world. That's why a certain manga artist, whose profession I know best, and a chef of a familiar restaurant also appear in this part.

Araki: You get the feeling that the town of Morioh actually exists. Part 4 had to end because Kira was gone, but I really want to draw more. I want to put something else in that town, so maybe I will draw it again someday... In Part 8 and 9 (laughs).

- I would definitely want to read it. Is there anything else you tried to come up with in Part 4 regarding “reality”?

Araki: I would often think about the different sides of characters that aren't really shown in the manga, but not like obscure trivia or something. For example, Josuke was truly hurt by the fact that he grew up never knowing his father. However, he covers up this pain with the pompadour man who saved him as a kid. He considers that man a hero, somebody he can rely on, and a symbol of his faith in people.