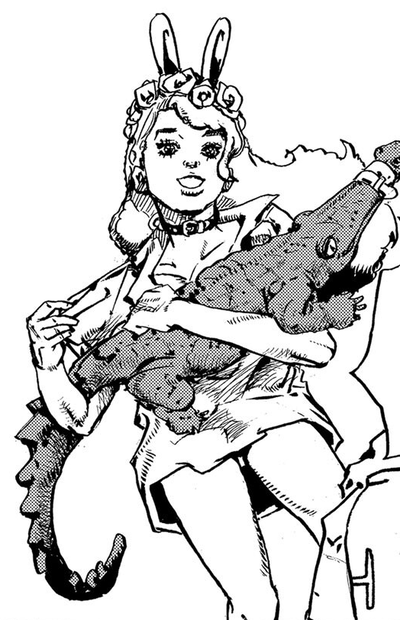 Eve is a 19-year-old girl of average build. She has thick, long light colored hair and wears a flowery headband with bunny ears. She also wears a white blouse and pantyhose with a houndstooth pattern.

Eve is an extremely obsessive young woman who proclaims herself to be Rohan Kishibe's biggest fan—much to his annoyance. She likes crocodiles and has one as a pet named "Mu-chan" (ムッちゃん), which she carries around almost everywhere she goes. Regardless of getting Rohan's autograph twice, she still tries trespassing onto his property by climbing over his neighbor's fence. Her pages from Heaven's Door's ability are also filled with her expressing her love for Rohan and whatever she did with his doppelgänger.

Although she appears harmless, Eve is a yandere whose love for Rohan takes a psychopathic turn when she assumes he is cheating on her with Kyoka Izumi. Her violence goes as far as attempting to murder Kyoka by drugging her. She also drugs Rohan out of anger and kicks his phone away, causing it to shatter on the ground. However, she intends to eventually save his life after he suffers from the drug and watches Kyoka die so that they can be accomplices in crime and spend their lives together forever.

Eve is observant and somehow capable of perceiving that Rohan can read minds when he touches someone, despite seemingly not having a Stand herself. The dark side of her from her doppelgänger is still obsessed with Rohan and is happy to be scolded by him. 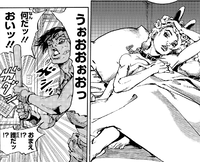 On July 7, 2021, Eve trespasses onto Rohan's garden claiming to be Rohan's fan, but Rohan turns her away and mentions he already gave her an autograph twice before. She's disappointed to be scolded by him, but follows his order and leaves.

In the days after that, Rohan is replaced by a doppelgänger who starts hanging out with Eve. At some point, they play baseball together. The fake Rohan invites Eve home on October 6 and they sleep together that night. The real Rohan then returns home the next evening and finds Eve naked in his bed with a choker on her neck and handcuff around her ankle. He grabs a baseball bat and threatens her for breaking into his house, but Eve misunderstands and thinks they'll be using the bat in bed. She then leaves to use the bathroom. While Rohan is checking the security camera footage, Eve gets dressed in one of Rohan's polo shirts and shows Rohan her pet crocodile. Rohan immediately uses Heaven's Door to turn her into a book.

Drugging Rohan with a syringe

Another three months pass by with Yabubako-Hoshi taking Rohan's place and Eve gets pregnant with its child. On January 7, 2022, Eve drugs Kyoka by injecting a syringe into her neck. The real Rohan finds her body in his closet, no longer having a pulse. As soon as he wonders who did it, Eve injects his neck with the drug too. Not wanting to be a single mother, she claims that she'll live with Rohan forever. When Rohan realizes that she's pregnant, she suddenly kicks his phone away and breaks it, thinking that Rohan was about to touch her and not wanting to get her mind read. Rohan asks Eve to call an ambulance but she refuses, wanting the two of them to be accomplices in witnessing Kyoka's death so that they can share the secret forever.

Yabubako-Hoshi switching from Rohan to Eve

Rohan manages to trick Eve by using Heaven's Door on himself, revealing a few pages on his hand. He tells Eve that it contains everything about him, and she can learn the truth about whether he loves her or not. As soon as Eve gets closer to his hand to read it, Rohan uses Heaven's Door on her. He orders her to immediately go to Mutsu-kabe Shrine, find the old yew tree, and turn the mirror to the left. She does so and Yabubako-Hoshi switches from being Rohan's doppelgänger to Eve's. Yabubako-Hoshi escapes from the tree, leaving Eve's body behind. Yabubako-Hoshi then returns to Rohan's house with Eve's appearance. Rohan yells out the window that he'll call the police if she enters his property again and warns Yabubako-Hoshi not to do anything bad. He also returns Eve's crocodile, who is now revived.