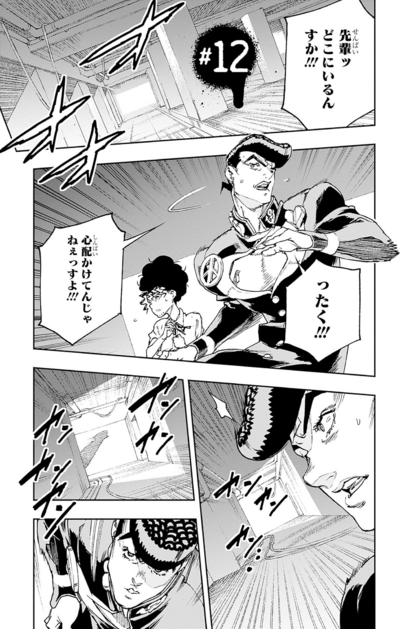 As Josuke and Boingo search for Ryoko, Josuke hears someone behind him. He almost attacks them with his Stand, but it ends up being Hol Horse, who was also ready to shoot with Emperor. Josuke tells Hol Horse that the parrot he "killed" is still alive, before they suddenly see what appears to be a bird zooming past them, as well as Ryoko running up the stairs. Hol Horse says he'll go after the parrot while Josuke chases Ryoko. Left behind, Boingo worries that this was a trick to split them all up.

Hol Horse catches up to the "parrot", but it ends up being a paper model of the bird. However, he sees someone standing behind him. He imagines that it's Noriaki Kakyoin at first, before realizing that it's just Ryoko. Possessed by Petsounds's ability, Ryoko takes out a gun and points it to her head. Hol Horse attempts to stop her but worries about what he should do.

Meanwhile, Josuke reaches the roof of the building and sees that Ryoko isn't there. He realizes that he must have seen a memory of Ryoko running up the stairs replayed by the parrot because she still had her uniform on, even though Boingo is wearing it. Suddenly, Josuke falls victim to another attack from Petsounds. Josuke is put into the role of Daniel J. D'Arby, who is challenged to a poker game by DIO. DIO tells Daniel that his little brother, Telence, has already become a devoted servant. However, Daniel would rather remain as DIO's equal unless they gamble in a one-on-one game. DIO brings up that he heard Daniel was called "Danny" when he was a kid. Thinking of the name makes DIO feel like he wants to find someone with the name "Danny", tie them up with wires, throw them into a box, and then watch them burn alive in a furnace. He threateningly asks Daniel whether this was really his childhood nickname, but Daniel hesitantly denies saying he was always called D'Arby.

Josuke feels anxious from DIO's intimidation and pressure, despite being aware that it's just an illusion. D'Arby regains his composure, agreeing to DIO's challenge. He thinks to himself that it will be an easy win for him since he rigged the match to place five aces and a joker in front of him, whereas DIO is given a worthless hand. At first he thinks DIO is an amateur, letting his disappointment with his cards show. However, he suddenly sees that there are bloody fingerprints on the back of DIO's cards. Looking down at his hand, he realizes it was his own blood, with each of his fingernails being thinly vertically sliced. D'Arby realizes that DIO somehow managed to switch their cards right in front of him. Immediately after, DIO reveals his own cards and it's the same worthless hand which D'Arby was just holding. DIO had switched their cards again mid-speech without D'Arby having any idea of DIO's methods. Appreciating how composed D'Arby looked while he was cheating, DIO takes pity on him and lets him win. He tells D'Arby to consider this victory a loan, ordering him to never lose a match again. D'Arby severely panics upon seeing DIO's otherworldly power, realizing anything he could do is useless. While Josuke is defenseless upon his mind being broken from D'Arby's panicking, Karaiya shows up behind him with a cutting torch.