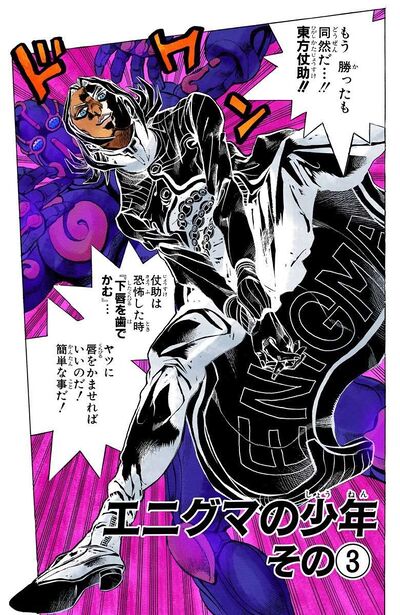 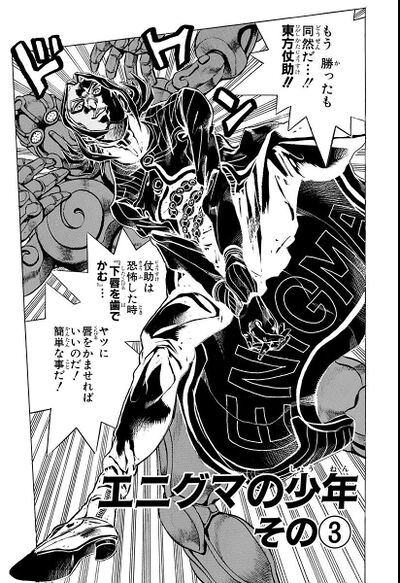 Enigma Boy, Part 3 (エニグマの少年 その③, Eniguma no Shōnen Sono 3), originally The Moment of Invincibility! (無敵の瞬間！, Muteki no Shunkan!) in the WSJ release, is the one hundred forty-first chapter of Diamond is Unbreakable and the four hundred sixth chapter of the JoJo's Bizarre Adventure manga.

Terunosuke is convinced that his Enigma is invincible now that he knows Josuke's reflex of biting his lip when he's afraid. Meanwhile, Josuke yells at Yuya to tell him where the enemy went. Sweating heavily due to fear and the tension of the situation, Yuya says it's too dangerous for him and he doesn't want to make enemies with Kira's dad so he's going to stay uninvolved.

Josuke inspects Tomoko's pockets and finds a piece of paper. After moving it, Yuya notices that Koichi's scent moved, and thinks Koichi might actually be the paper. Josuke unfolds it, but the paper ended up being blank...or so he thought. A gun suddenly pops out of the paper and shoots Josuke, but Crazy Diamond manages to grab the bullet before it pierced him. Josuke is convinced that the paper is the enemy's Stand, so Terunosuke reveals himself by coming out of the paper from behind a pole. To show off his ability, he rips open another piece of paper which reveals a plate of fresh tonkotsu ramen, now shattered due to the paper being torn apart. Terunosuke says that Koichi is one of the papers in his possession, but his Stand is too weak to kill him.

Determined to beat him up, Josuke attempts to punch him with Crazy Diamond, but Terunosuke disappears again within a paper. Meanwhile, the paper with Koichi's name on it starts flying toward the wheels of a fast car on the road. Helpless, Josuke bites his lip as there was nothing he could do.