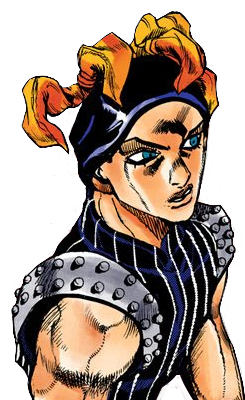 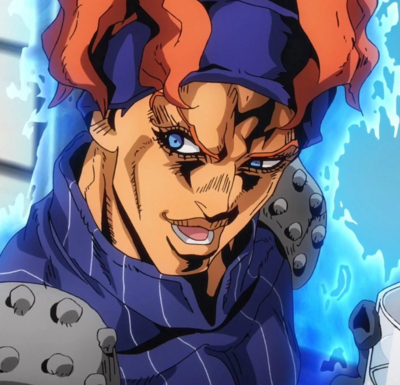 GioGio's Bizarre Adventure
Pitter-Patter Pop! (Playable)
“
I won't leave even a scrap of him behind, and I'll kill every last member of his team... I'll rip them to pieces and make them pay for what they've done!
”
—Squalo, Chapter 531

As a member of Passione and by extension the Boss' Unità Speciale, he works with his partner Tizzano in Venice in order to assassinate Team Bucciarati after they defect from Passione. Squalo is a Stand User and commands the stealthy yet lethal Clash in battle.

He is also the main protagonist of the light novel testimone di gangster.

Squalo wears a dark pinstriped jumpsuit with studded shoulder pads. He also wears a dark large headband and gloves, as well as three dark wristbands on each arm.

Tizzano and Squalo
Squalo is a hot-headed individual, being the most aggressive of his partnership with Tizzano and letting the latter do most of the thinking. Squalo is however adept at using the most of his environment. Squalo is also more prone to panic, especially when he is pursued by Narancia.

Squalo shares a deep bond with Tizzano, swearing to avenge his partner when he dies.

Clash is a shark Stand which cannot sustain itself out of water but can teleport between close water bodies to maul its target.

Squalo and Tizzano were working together under one leader but were not yet familiar with each other when they were assigned the mission to stop a trial that would expose the true scale of Passione's drug trafficking operation to the public. The trial involved a member turned traitor named Pollo who decided to testify against the gang for the prosecutor, a famous and respected lawyer named Gilberto Falco.

The leader, an old-school gangster, wanted to assassinate Falco. However, Tizzano objected because it would be tantamount to admitting the guilt of the 32 defendants who were actually members of the gang. Instead, he proposed to make Pollo rescind his testimony in the middle of the trial to ruin Falco's reputation. The leader accepted the proposition but it incurred his wrath, thus the leader told Squalo to assassinate Tizzano after the mission was fulfilled.

Squalo and Tizzano met a first time before the first hearing. In there, Tizzano told Squalo that Pollo secretly had a half-sister that even Falco didn't even know about. He told Squalo of his plan of having this woman be abducted and then to have the lawyer defending the gangsters to secretly but ostentatiously show the sister's ring (which was a gift from Pollo) to the witness. This would put pressure on Pollo to falsely testify to the gang's advantage.

During the first hearing, Squalo assists to the trial as part of the audience and brings a thermos of coffee. The plan goes without a hitch and Pollo falsely testifies. The courtroom erupts into chaos because Pollo accuses Falco of making up the entire case. The judge postpones the second hearing. During the pause, Tizzano warns Squalo not to underestimate Falco. Tizzano tells Squalo that he will need to use Clash in the second hearing and they decide on signals so Squalo will know when to act. Squalo worries about his mission to kill Tizzano, but Tizzano reassures him and tells him to just pretend to swear his allegiance to their leader even if he doesn't mean it.

During the second hearing, Pollo's false testimony begins to ruin the reputation of Falco. Suddenly, Falco brings in another witness: Pollo's cherished half-sister. Reassured, Pollo decides to testify and tell the truth. At this moment, Pollo prepares himself and drinks a bit of water. The duo act at this moment and Squalo's Clash transports Talking Head into Pollo's mouth. Thus, Pollo is forced to tell lies and falsefully accuses Falco of using intimidation tactics on him to get him to make false accusations. Satisfied, Squalo kills Pollo by having Clash rip out his tongue. The judge attempts to call for a recess but Tizzano publicly accuses Falco. At this moment, Squalo's Clash is able to transport Tizzano's Talking Head into Falco's mouth due to him sweating heavily. Falco is also forced to confess to false crimes. Falco's reputation is ruined, but the prosecutor sees the duo, who are the only two calm men in the courtroom, and understands that they are the culprit. Falco bites off part of his tongue to be able to tell the truth and declares that justice will prevail at the end. However, Clash kills him.

Afterwards, Squalo and Tizzano meet again. Squalo has decided to kill his leader instead, having seen how clever Tizzano can be and how his abilities can be put to use for the gang while the leader is old-fashioned and incompetent. Still, Squalo worries about Falco's last words and defiant attitude even as he faced death.

After Team Bucciarati's defection, Squalo is contacted to track and eliminate the traitors. Squalo himself enroles Tizzano in his mission.

As Team Bucciarati has lunch, Squalo and Tizzano position themselves on a nearby rooftop to observe their target. Squalo sends his Clash into Narancia's soup. Narancia immediately summons Aerosmith and shoots at Clash upon seeing but the shark disappears in the bowl only to reappear inside of the soup in his new spoon and jump to tear off his tongue. Narancia's throat starts to seize up and he cannot inform his team that the shark can teleport between liquids but he is saved from choking when Giorno stabs his trachea with a pen to let him breathe while he creates a new tongue. Seeing Giorno's resourcefulness, Tizzano and Squalo understand why they have been advised to take him out.

Giorno finally understands that Narancia is being forced to lie by an enemy ability to Narancia's relief. However, water starts leaking from the damaged pipe, creating a large puddle from which Clash emerges and tears at Giorno's throat. Narancia summons Aerosmith and tries to shoot, but Clash can teleport faster than the bullets. Nonetheless, Tizzano warns his partner that Aerosmith can detect CO2 coming from Giorno; thus he must completely stop Giorno from breathing. Clash effortlessly evades Aerosmith's shots and baits Narancia into shooting into Giorno and one of the toilets, freeing Clash to head for the sewers. The duo hears Narancia angrily shout that he's lost track of the enemy, but Tizzano understands that Narancia means that he's still following Clash. Giorno deliberately let himself get shot by Narancia; the tracer bullets embedded in him are emitting CO2 for Aerosmith. This time, the miniature plane Stand shoots true, managing to wound Clash.

Clash returns to the surface in one of the restaurant's aquariums, still followed by Aerosmith. Now at a disadvantage with the CO2 coming from Giorno, Squalo tries to warp Clash between bodies of water in the restaurant; however, his injuries have slowed his Stand's movements. Aerosmith lands several more shots as Clash flees to the kitchen, eventually cornering the shark-like Stand near a stove just as Giorno completely stops breathing. Despite his wounds, Squalo taunts Narancia through his Stand; the stove is now leaking gas that would cause an explosion if Aerosmith fires its guns. However, Narancia is unimpressed and sends Aerosmith to ram Clash head-on, cutting the enemy with its propeller before hurling it into a corner of the room. Tizzano momentarily deactivates Talking Head's ability, making Narancia's shouts lure the rest of Team Bucciarati into the kitchen, then reactivates his Stand and forces Narancia to encourage Mista to shoot at Clash. When Mista shoots, the gas explodes and throws everyone away, causing a blaze that saturates Narancia's radar. Clash takes Giorno and puts him in the sewers. It proceeds to attack Team Bucciarati using the puddles of water around the kitchen; with Narancia forced to misdirect them, Mista and Abbacchio are wounded by their assailant.

Squalo and Tizzano join the streets, with the former wearing a cloak to hide his serious injuries. Seeing Narancia going in their direction, Squalo fears that their enemy is searching for the ragged breathing of an injured person but Tizzano points out that the many people in the surrounding crowd will throw Narancia off. He also points out that Narancia keeps shouting that he's found the enemy; since Talking Head is still active, that must mean that he's lying. Suddenly, the pair see that Narancia is holding his own cut-off tongue at the tip of his knife, using Giorno's transformed brooch as a replacement tongue. Tizzano barely has time to curse Giorno's resourcefulness before Narancia addresses him directly. Aware of the sheer number of signals on Aerosmith's radar, he was waiting for someone's breathing to change drastically when they saw him cut out his own tongue. With their cover blown, Tizzano tells Squalo to recall Clash but there's no liquid close enough for the Stand to ambush Narancia from. Free to attack, Narancia has Aerosmith shoot Squalo but Tizzano shields Squalo with his own body, collapsing in his partner's arms and splashing Narancia with his blood. With his last breaths, he weakly encourages Squalo to continue the mission, certain that they can still succeed despite things not going according to plan.

Squalo is shot down

Enraged by Tizzano's demise, Squalo vows revenge on all of Team Bucciarati - at his orders, Clash bursts out of the blood on Narancia's face and tears into his throat. Undeterred, Narancia sends Aerosmith to push Squalo high into the air, announcing that his entire team will make it out of Venice alive before having his Stand fill its target with bullets. With a final cry of "Volare Via", Clash goes flying out of Narancia as its user plummets to the ground, impotently wondering how the rogue Passione members still have hope before he joins Tizzano in death. 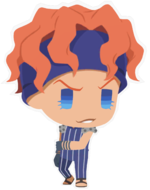