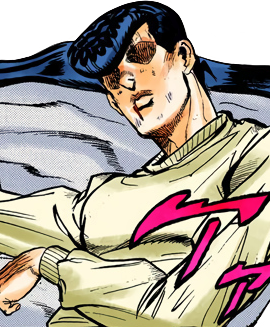 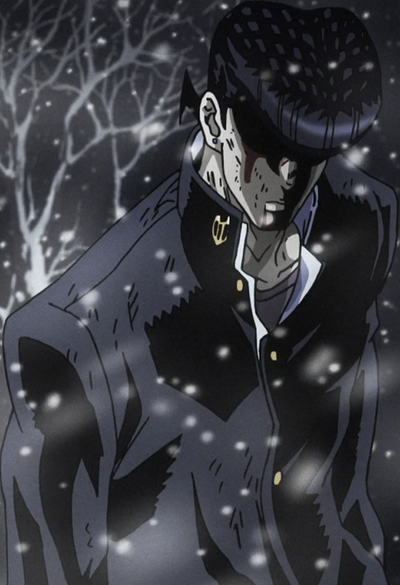 Josuke's Savior (仗助の恩人, Jōsuke no Onjin) is an unnamed tertiary character featured in the fourth part of the JoJo's Bizarre Adventure series, Diamond is Unbreakable. He is a mysterious teenage high school student who helps a young Josuke Higashikata and his mother Tomoko get to the hospital by pushing their car when it is stuck in a blizzard.

The boy has a pompadour hairstyle and a delinquent's school uniform. His jacket is styled with three vertical metallic stripes on the left side of his collar and a metallic emblem with vertical holes inside on the right side. Beneath his school jacket, he wears a sweater with long sleeves.

The identity of Josuke's savior is a commonly discussed subject in the fandom, dating back to when Part 4 was first publicized in Weekly Shonen Jump.[3]

In a 1994 interview with OVA director, Hiroyuki Kitakubo, when asked about the flashback and whether it was Josuke who met himself, Hirohiko Araki replied, "That's irrelevant, it was merely Josuke's memory".[4] David Production's TV anime director, Naokatsu Tsuda, also inquired Araki on who the mysterious boy was during production of the anime adaptation, though Araki seemingly chose not to comment.[3]