This is a list of minor characters featured in one-shots related to the JoJo's Bizarre Adventure series, such as Thus Spoke Kishibe Rohan.

employee who met Boingo in Egypt while on vacation. The employee received the Tohth book and later photographed its pages when it only had the predictions shown during Stardust Crusaders (indicating it happened shortly after the end of Part 3). Mr. O fears that the book runs out of pages after numerous predictions.
Mr. Osato 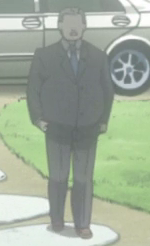 Manga Debut: Thus Spoke Kishibe Rohan - Episode 2: Mutsu-kabe Hill
Anime Debut: TSKR Episode 2: Mutsu-kabe Hill
Voice Actor: Shinnosuke Ogami (拝真之介) (Japanese)
Jérémie Bédrune (French dub)
Pino Pirovano (Italian Dub)
Mr. Osato, otherwise known as "Naoko's Father", is the head of the Osato family. He and his wife doted on their daughter Naoko, to the point they refused to let her live alone in S-City and would rather have her go to school by private car. He settled on Shuichi as a suitable spouse for her and brought Shuichi to meet Osato one day, unaware that she just murdered the gardener, Gunpei Kamafusa. Noticing that Naoko is in the guest house, he knocks at the door and almost opens the door with a spare key, but when Naoko says she's changing clothes, Mr. Osato prefers to leave.
Shuichi 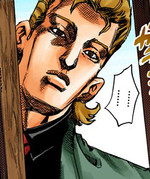 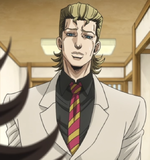 Manga Debut: Thus Spoke Kishibe Rohan - Episode 2: Mutsu-kabe Hill
Anime Debut: TSKR Episode 2: Mutsu-kabe Hill
Voice Actor: Takeaki Masuyama (Japanese)
Constantin Pappas (French dub)
Roberto Palermo (Italian Dub)
Shuichi (修一, Shūichi) is the fiancé of Naoko Osato, set to be married after her graduation. The marriage was arranged by their respective families. One day, Shuichi comes to visit Naoko at her home and suspects she was with another guy. She was actually with her secret boyfriend Gunpei Kamafusa but just murdered him a few moments earlier in an accident. She manages to hide his corpse before Shuichi sees her in the kitchen and he apologizes for getting the wrong idea.

After their marriage, he seems to care about her, but she continues to love Gunpei even as a corpse. Their life together was happy, and even though they didn't burn with passion for each other, they were blessed with two kids (actually Gunpei's children, but Shuichi didn't know this).

Anime Debut: TSKR Episode 2: Mutsu-kabe Hill
Voice Actor: Frédéric Souterelle (French dub)
Claudio Colombo (Italian Dub)
Batsudera is a real estate agent, exclusive to the OVA version of Mutsukabe Hill. He is introduced following Rohan in the mountains and nagging him to convince him to sell his lands, which Rohan refuses. He almost surprises Rohan in the compromising situation of looking like he's killed a little girl.
Frida Giannini 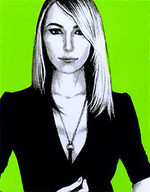 (フリーダ・ジャンニーニ, Furīda Jannīni) is the creative director of the Gucci brand. The Gucci brand strives the philosophy that respects traditions within the convention of beauty that gives birth to a new beauty that creates the best in quality and innovation, and that's why Frida is at the pinnacle of the brand Gucci has given birth to numerous icons to this day, icons that Frida respects and, with her unique talents, gives them a new interpretation which gives birth to an innovative design. The artisans give this a physical form and breathe life into them, so they could be called Frida's right hand men. For many generations the artisans continued using traditional skills combined with Frida's innovative design for Gucci, earning the world's trust. She's based on the real-life Frida Giannini

.
The Gods of the Mountain

Manga Debut: Thus Spoke Kishibe Rohan - Episode 5: Millionaire Village (Mentioned only)
Anime Debut: TSKR Episode 5: Millionaire Village (Mentioned only)
The Gods of the Mountain (山の神, Yama no Kami) are the entities that put the Village of Millionaires under a curse. The residents (or those who want to be one of them) of the village who show good manners gain something, usually money, while those who don't lose things, mostly the life of a friend. The village had 11 residents, all at the age of 25, that became rich from one day to another after living in there. Kyoka Izumi, who wanted to buy a house in there, went to the village with Rohan Kishibe and was greeted by the gods' butler, Ikkyu. Izumi failed at her test and lost the lives of her mother and fiancee. The gods can give as many chances as they want, but one by one things will be lost if the person keeps failing. After realizing the identity of Ikkyu's master to be the Gods of the Mountain through Heaven's Door, Rohan decides to leave the place with Izumi and never go back.
Virgina 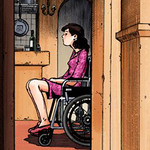 , Italy. She has a large brain tumor that even Pearl Jam couldn't heal and could no longer walk or stand. Rohan discovers that Tonio brought her to Morioh in hopes of Morioh's disk abalone

cooked together with Pearl Jam having a possibility of healing her.

Some time after Rohan successfully poaches some abalone, he is glad to see Virgina together with Tonio in the kitchen, with her no longer in a wheelchair. 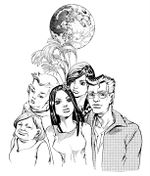 Manga Debut: Thus Spoke Kishibe Rohan - Episode 4: The Harvest Moon
The Mochizuki Family (望月家, Mochizuki-ke, the names have been changed) are a cursed family comprising the the father Noboru (昇, 50 years old), his wife Haruko (晴瑠子, 46 years old), his eldest daughter Aki (亜貴, 21 years old), his youngest son Takeru (猛, 15 years old), and his mother Mitsu (ミツ, 78 years old). The father is a company employee while his wife is a housewife, and both his children are still students.

Unbeknownst to them, the family is stalked by a spirit taking the form of a man with a rabbit mask who brings misfortune to anyone in the family who doesn't spend the harvest moon night watching the moon. The family as a whole is incredibly unlucky, but those who watch the harvest moon have had long lives. The family lived like this since the battle of Sekigahara. 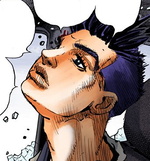 Akira Katahira (片平 央, Katahira Akira) is Mai Katahira's deceased husband. He passed his bar exam to become a lawyer. However, he died in a tragic car accident, and died while reassuring Mai that she would be ultimately fine. He has the habit of scratching his head with his pinky finger while sticking his tongue out to hide a failure. He also like canned coffee and used to open it with his pinky. He is named in the TV Drama adaptation of "D.N.A.".

Manga Debut: Thus Spoke Kishibe Rohan - Episode 8: Deoxyribonucleic Acid
Tomoya (友弥) is the son of Obanazawa. He has a very minor role in the story and is introduced as one of Mao Katahira's playmates.
Deliveryman Sawaki 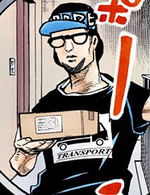 On November 4, after disturbing Yoma's strict sleep schedule, Sawaki was pulled into Mika's apartment and brutally murdered. Yoma killed Sawaki by severing the carotid arteries in his neck. His body was hidden in the apartment block's underground parking lot, encased in cement.

. Kyoka puts her in Taro Hirai's care before she tries to buy a luxurious villa. The gods of the mountain curse Kyoka and it seems that Maron may die, but Rohan manages to make it so the dog is revived.
Ryutaro Todo 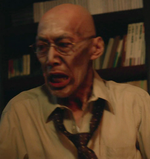 Debut: Kushagara (TV Drama)
Live Action Actor: Mutsumi Sasaki
Ryutaro Todo (藤堂隆太郎, Tōdō Ryūtarō) is a 62-year-old archaeologist and university professor at Tsutsujigaoka University. Affected by the word "kushagara", the professor frantically searches through his books for the word "kushagara" and its meaning. He actually secludes himself in his university office and cuts ties with his family for a month. He dies from nutritional deficiency. Rohan wishes that he could have read the man's life.