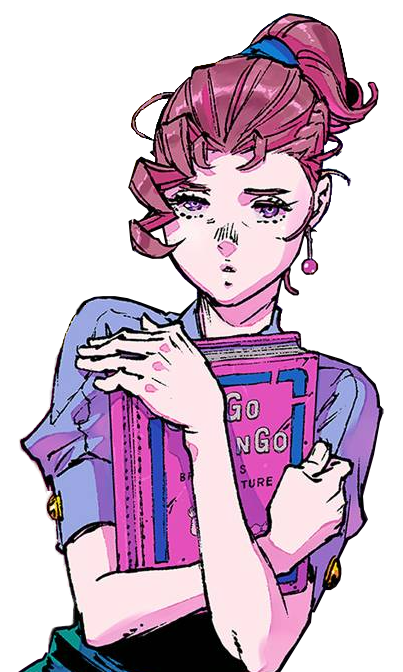 CDDH Chapter 1
“
What happened to you? Why did you disappear from our lives? Why…? You were my cousin… so why won't you tell me, Noriaki…?
”
—Ryoko Kakyoin, CDDH Chapter 1: Crazy Diamond's Demonic Heartbreak #1

She spends a few days in Morioh after visiting Noriaki's grave and suddenly stumbles upon a strange book that predicts future events.

Ryoko is a young Japanese girl who is just entering university and thus is a teenager. She has a svelte body and is of small stature, being more than a head shorter than Hol Horse. She has long hair pulled back into a short ponytail and a braid running along the side of her head. Ryoko also has a notable twisting bang on the right side of her face. Like Noriaki before her, she wears a single cherry earring.

Ryoko wears a light shirt with short sleeves, a dark necktie, a long dark skirt with a large dark belt that covers her whole abdomen, and loafers with spotted socks.

Ryoko is shown to be attached to her cousin Noriaki Kakyoin and to his memory. Even ten years after his death, she takes the time to visit and mourn over Noriaki's grave just before the academic year begins.[2] After Noriaki's death, she tried researching to understand the cause and found incidents that may have some connection, like senator Wilson Phillips dying on the same day.[1]

She hates cloudy days because she can't see the sky. Ryoko is not afraid to stand up for others and selflessly protects an old lady from a thug.[1] 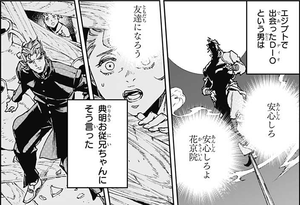 At some point in 1988, Ryoko went on a family vacation to Egypt along with her cousin, Noriaki Kakyoin. They encountered DIO in Cairo. Ryoko apparently escaped DIO's notice by hiding behind some planks while the Vampire confronted Kakyoin. She managed to safely return to Japan with her family but then Noriaki vanished, only for his corpse to be found in Cairo.

Ryoko walks away, hiding the mysterious book she found

In March 1999, Ryoko has just gotten admission to a university. Before the academic year begins, she goes to Morioh to pay her respects to Noriaki's grave. A bird suddenly flies above her and she has a vision of DIO apparently trying to seduce her to his side. When she returns to her senses, she tearfully asks why Noriaki "disappeared" from his family's lives.

Going back to town, Ryoko calls someone to inform them of her whereabouts and says that she plans on staying in Morioh for several days. While walking, she spots a strange comic book on the ground and picks it up. Skimming the pages, she sees a line predicting that Hol Horse will see DIO. The sight of DIO's name makes her recall a scene of Noriaki obeying DIO's orders. Someone approaches and Ryoko takes the book with her, hiding it in her bag. She then passes by Hol Horse himself while walking away with the book.[2] 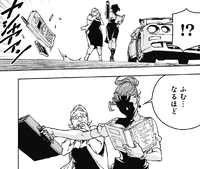 Later, Ryoko takes out Boingo's book from her bag and contemplates taking it to the police. She thinks back to how Noriaki vanished after returning to Japan without saying a word to his family and then his corpse was found in Egypt. When she thinks that the book could have had something written about Noriaki in it, new pages showing Josuke start to emerge.

A thug parks his car in the middle of the road, blocking the way for other drivers. An elderly lady walks up to him and asks if he can move his car but the thug furiously tosses his phone at her, asserting that she made him miss part of an important call. Ryoko walks in front of the old lady and deflects the phone away with her bag, breaking it when it hits the ground. She tells the man that although he's clearly evil, he'd be better off parking somewhere else. Infuriated, the man yells at Ryoko for breaking his phone and asks if she's one of Fungami's girlfriends. However, the thug's girlfriend comments that Fungami only likes pretty girls. 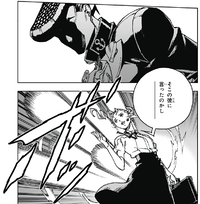 Ryoko points out Josuke behind her

The thug insults Ryoko's dangling hair, claiming Fungami wouldn't give the time of day to someone like that. Ryoko then smirks and asks if he was talking to the boy behind her, pointing out Josuke. Instantly, Josuke rapidly punches away the thug's car with Crazy Diamond, reshaping the roof of their car into a cage. Hol Horse apologizes to Ryoko for Josuke's behavior, asking if she got hurt anywhere. Ryoko thinks back to the pages she just read in the book, amazed that its predictions came true.[1]