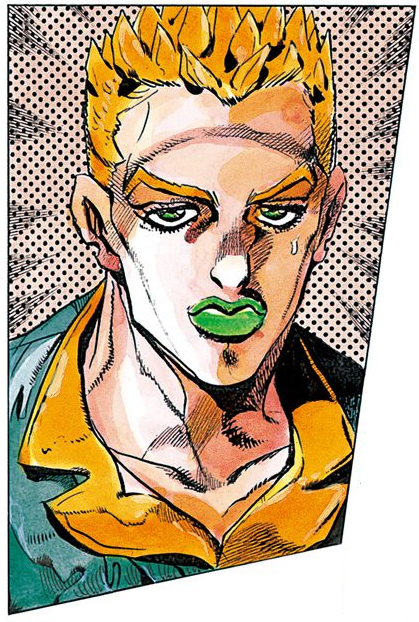 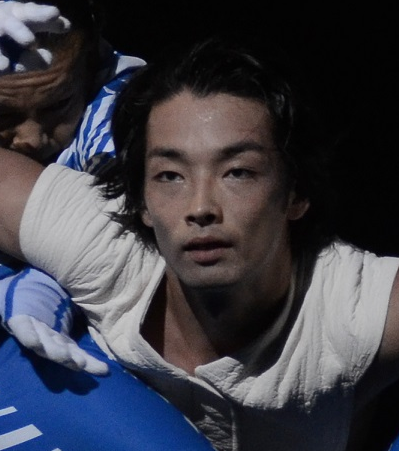 Prisoner 27 (囚人27号, Shūjin Niju Nana-gō) is the unnamed protagonist of the one-shot Under Execution, Under Jailbreak.

Sentenced to execution, the prisoner unknowingly finds himself in a bizarre cell filled with traps.

The prisoner is a blond-haired young man of muscular build, wearing green lipstick. He has short hair combed into multiple small spikes pointing upward. During his trial he dons a green and yellow suit but when he gets sentenced to death he wears a yellow, green buttoned prisoner attire with the number 27 marked on it.

When 50 years pass during his imprisonment, he is visibly aged.

Prisoner 27 is an eccentric individual showing little concern for the lives of others, having been sentenced for murder. Despite having no qualms about lying to others, the prisoner despises being lied to and takes this belief to an extreme.

Even though he is impulsive, the prisoner is clever to a degree, being capable of avoiding certain death in his execution room. He becomes confident in his ability to escape, yet remained in his cell for 50 years.

At some point before his imprisonment, after having slept with a girl, he found out he was missing some money. He asked the girl for an explanation, but she claimed to know nothing about it. According to the prisoner he would've been more than willing to forgive the theft, but due to his deep hatred against liars, he went through with killing the girl.

At his trial, the court sentences the punishment for his crime: death penalty. The criminal is taken to jail, where he lies waiting for the execution.

Once in his cell, he quickly finds out that the warden wouldn't come, no matter how many times he'd scream for help. His subsequent investigation of his room lead him to uncover that, despite its appealing look, it is filled with an assortment of traps, including a bee's nest hidden in a light switch; a plate of fish-bones, disguised as a fully intact fish; and a chair that has been rigged to break. Barely surviving through these traps, he uncovers that one of the cell walls is seemingly as soft as butter; and tries to dig a way out. Much to his dismay, it is revealed to be another trap: a grinder, hidden just beyond the wall, proceeds to cut the fingers off his right hand.

He falls onto the floor, whereupon he discovers nails scattered all over - snagging his clothes, and attempt to burn him with a secreted acid solution. He risks his life when, trapped upon the sofa, he realizes it's nothing more than an electric chair. In a last ditch effort, he manages to escape electrocution by sacrificing his right hand. The chair explodes, breaching the cell wall. Believing himself to be finally free, Prisoner 27 begins to move towards the exit, but then sees grooves in the sides of the hole; he immediately concludes there's a guillotine hidden in the wall.

50 years have passed since the sentence, and Prisoner 27 is still in his cell, staring at the breach in the wall. Every year, when winter is over and spring begins, he is tempted to run outside. He still swears to himself that one day he will find a way to escape, proving himself more cunning than his jailers.[1]

Under Execution, Under Jailbreak (Play)

The man is sentenced to death and imprisoned. However, the room he finds himself in is too strange to be called a prison. As soon as the man begins his life there, everything in the room begins trying to execute him. While struggling to escape, the man eventually climbs onto a yacht floating in the ocean. He sees the illusion of the woman he killed, and a cat staring at the sin he committed.