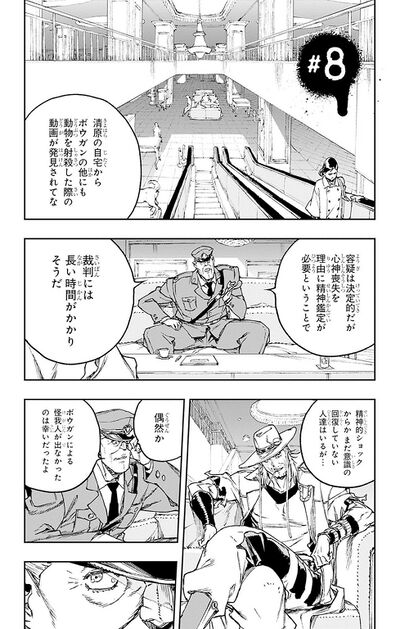 Ryohei tells Josuke, Hol Horse, and Boingo about what happened to Koji Kiyohara after he was taken to custody. They investigated Kiyohara's home and found videos of him shooting animals to death, so they are planning to do a psychological evaluation on him. Furthermore, some victims still haven't regained consciousness from the incident, possibly due to shock. Hol Horse thanks Ryohei for the information and figures they should go look for Boingo's comic book next. He tells Boingo to stay in his hotel room until everything is resolved. After they leave, Ryohei suggests that Boingo should try looking for the book on his own, since it's something he treasures. Boingo appreciates his advice. Josuke is curious as to why Boingo is so desperate to get his manga back instead of just buying another one. He looks at a drawing of the book and suddenly realizes where he might have seen it before. Josuke tells Hol Horse that he'll meet up with him at the hotel later and leaves on his own.

Meanwhile, Ryoko recalls when her mother told her about Noriaki's death ten years ago. She also thinks about the fuse that Tohth told her to find. After getting angry that the book won't give her a straight answer, she calms herself down thinking she shouldn't blow up from anger like Josuke does. Thinking about Josuke gives her a sudden realization that he might be the "fuse" that the book was talking about. Josuke then arrives and asks Ryoko whether she's hiding something from them. Ryoko worries about whether Josuke knows she's hiding the book. She attempts to run away from Josuke but is trapped by a dead end. Josuke grabs her hand and pulls out Boingo's book from her bag. He mentions that he caught a glimpse of it when she slapped him earlier but wasn't actually sure if it was the same book. Josuke assumes that Ryoko must have some reason for having it since she doesn't seem like the type to steal.

Ryoko pulls her hand away and exclaims she can't give the book back yet. She tells Josuke about the time she and Noriaki met DIO ten years ago in Egypt. DIO used his Stand to immediately appear as if he teleported behind Noriaki. He tried recruiting Noriaki to work for him but Noriaki summoned Hierophant Green and tried to use Emerald Splash. However, Noriaki's attack didn't make it on time as DIO implanted a flesh bud into his forehead. Noriaki's demeanor suddenly changed and he became a loyal servant to DIO.

Back in the present, Kiyohara is sitting in his jail cell mumbling to himself in fear. When a police officer shines a flashlight at his cell, Kiyohara sees a memory of Kazuki Karaiya sitting beside him in a police car. Karaiya asks him how it felt to lose. When Kiyohara doesn't answer the question but instead asks who Karaiya is, Karaiya screams at him. Petsounds then appears behind Karaiya and activates its Stand ability on Kiyohara, causing him to shriek in his cell.

(Flashback) (Ability only)
The World