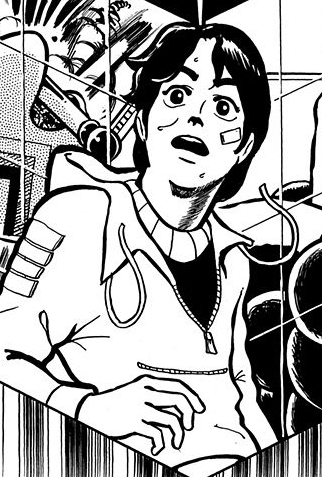 Engineer
Second in Command to the Dillinger

Say Hi to Virginia
“
How can I be calm? Who would plant a bomb on some regular cargo ship like this?! (おちついていられますか！なぜこんなさえない運送船に爆弾しかけられなきゃあいけないんだぁ？！Ochitsuite iraremasu ka! naze konna saenai unsousen ni bakudan ga shikakerarenakyaa ikenainda?!)
”
—Hiroshi Takemoto, Say Hi to Virginia

Hiroshi Takemoto (ヒロシ・タケモト, Hiroshi Takemoto) is the main protagonist of Say Hi to Virginia. He is an engineer and second-in-command to the cargo ship, the Dillinger.

Hiroshi is a relaxed young man, killing some time through cooking until his life is suddenly endangered when a mysterious bomber tells him that his crew must disarm a bomb that threatens to destroy their ship.

Hiroshi is a young man with average build. His dark-colored hair is short and wavy, and he is often seen dressed very casually. While cooking, Hiroshi wears a flower apron.[1]

Hiroshi is depicted as a cheerful and laid-back young man, albeit naïve at times. He seems to be very polite and friendly with his crewmates as he often offers things to Matt. However, he can quickly become aggravated in times of panic, such as during his interactions with the mysterious bomber.[2]

Hiroshi is introduced cooking with one of his crewmates, Clyde, showing he is quite knowledgeable in the culinary arts. Throughout the one-shot he is seen cooking stews and brewing tea.[1]

One of Hiroshi's qualities listed in his introduction is being the ship's engineer.[1] He is very familiar with the technology aboard the Dillinger. When Clyde was in the process of dismantling Virginia, Hiroshi was able to point potential dangers to his crewmate, Matt Jackson, and when a waterpipe burst in the block, he was able to quickly identity the cause.

Hiroshi being informed of the bomb

Before becoming a crewmate of Dillinger, Hiroshi was a former soldier in the army.[3] While nothing else is known about Hiroshi's life before his position on the Dillinger, he is known to carry a good luck charm, given to him by his mother.

Aboard the Dillinger, he fulfills the role of an engineer and chef, being second in command to the cargo ship to his Superior, Matt Jackson. While cooking with Clyde one day, he receives a trasmission from an unknown, nearby ship, only to be told that a bomb named "Virginia" has been placed on their ship. Hiroshi initially takes the threat as a joke, assuming the other person to be bored and wanting to play a prank. 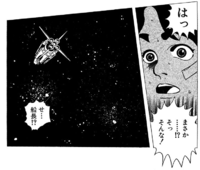 The Bomber is on the ship

Upon realization of the danger him and his crewmates are in, Hiroshi expresses a mix of shock and anger, rushing to inform Matt of the transmission. With the information they have, Hiroshi and Matt compose a plan of creating a vaccuum around the bomb and sending Clyde to disarm "Virginia". In the midst of sendng Clyde, Hiroshi offers the good luck charm, given to him by his mother, to Matt, who refuses it.

While Matt is directing Clyde in order to disarm the bomb safely, Hiroshi notices a waterleak nearby Clyde, a reprecussion of turning that section of the ship into a vacuum. Despite the danger of the water leak, the crew manage to disarm "Virgina", allowing Hiroshi and Matt to rest easy once again. Soon after Clyde's return, Hiroshi is seen brewing tea, offering some to Matt, who declines, claiming to go take a nap. Hiroshi responds that he will soon report the bomb back to their headquarters. While pouring himself another cup of tea, he is unexpectedly greeted by the mysterious bomber once again, infuriating Hiroshi as he demands their information and identity. The mysterious bomber then reveals that he is inside of the Dillinger, leaving Hiroshi in a state of confusion and shock. Upon further thought, Hiroshi realizes that the Bomber is his own captain, Matt Jackson.