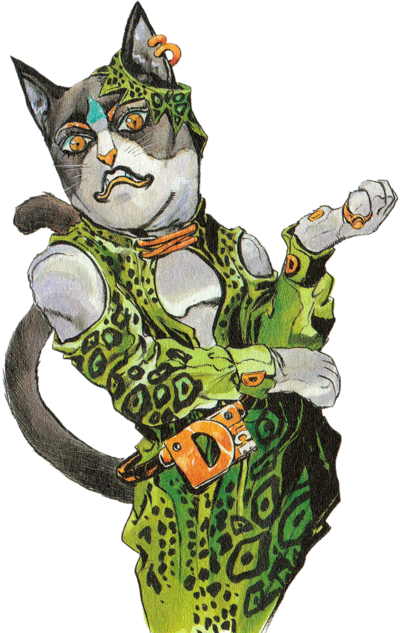 Dolce (ドルチ, Doruchi) is the main protagonist of the one-shot Dolce, and His Master.

Dolce has black and white fur. His owner Masago Ayashi later creates clothes for him. He has leopard-patterned clothes, a belt that says "Dolce", cloth around his ear with two earrings, a ring on his paw, and leather boots.

At first, Dolce's demeanor and actions suggest him to be a normal cat; typical mundane behavior, blank expressions, and according to Masago Ayashi, sleeps for at least 16 hours a day. However, as the story progresses and his primal need for food comes to light, he reveals advanced intelligence and human characteristics, including the ability to talk.

Masago had found Dolce in an alley one day. After moving in with him, Dolce seemed to be well cared for and Masago thought of him as a great friend.[1]

Masago decides to take Dolce along with a woman on a yacht ride, but they end up crashing into a rock and get stranded in the middle of the ocean. The girl had died by drowning after the impact but Masago managed to recover her body. Six days later, Dolce is chasing flies on her corpse. He spots a bottle of mineral water and desperately tries to open it but breaks two of his claws when he punctures the bottle. However, the holes he created makes some of the water leak out allowing him to drink the contents. Meanwhile, Masago is busy mourning within the cabin and grabs Dolce to comfort himself. Masago praises Dolce for being a good friend and reveals a present he made. He dresses Dolce in a costume made of their bed sheets and the woman's bag, and has fun teasing him. The cat then finds a piece of candy in between the cushions of the couch. Masago is about to eat it when Dolce stops him, wanting the candy for himself. Masago decides that they should settle it with dice, and whoever rolls the higher number gets to eat it. He rolls an 11, but Dolce ends up rolling a 12. Masago refuses to accept his loss, believing Dolce wouldn't know what the numbers mean anyways. He is about to eat the candy himself but Dolce snatches it from him and eats it instead. Dolce jumps away and a pot near him hits Masago's head. Masago chases Dolce outside and corners him onto the mast of the ship. They notice that the woman's body was eaten by sharks, with only her foot left behind. Masago begins eating the woman's foot but realizes it wouldn't be enough to fill him up, leaving Dolce afraid of his master.[1]

Masago climbs up the mast trying to lure Dolce down with a water bottle, secretly carrying a knife behind him, but Dolce doesn't move. Masago decides to make it a contest of endurance. Dolce eventually falls asleep but when he wakes up, Masago had disappeared. Dolce climbs back down and notices Masago's hand and a knife hiding underneath some planks. However, he is suddenly surprise attacked by Masago from behind him and gets a rope wrapped around his neck. Hunger crazed, Masago reveals that he cut his fingers off to trick Dolce. He attempts to eat the cat, but Dolce suddenly begins speaking to him in human dialect, saying that he'd allow Masago to eat him. Dolce jumps into Masago's mouth and promptly destroys his throat from the inside. Masago staggers backwards, and falls into the shark-infested sea.

Later on, a rescue helicopter arrives at the scene, but there appears to be no one on the yacht. A flock of seagulls flies by, and one of the pilots sees Dolce riding one of the birds into the distance but assumes it was his imagination.[2]