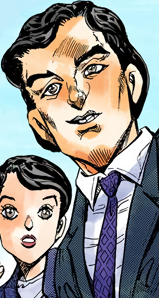 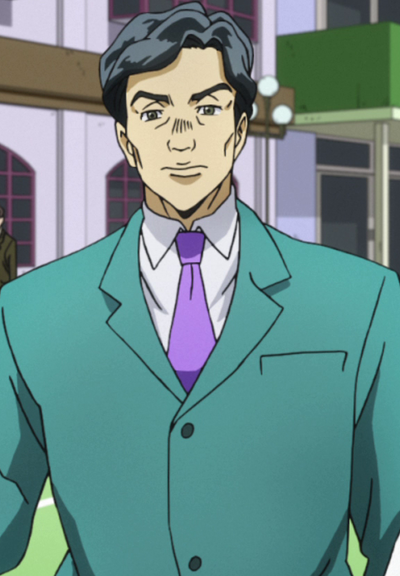 Kira's Coworker (吉良の同僚, Kira no Dōryō) is an unnamed tertiary character featured in the fourth part of the JoJo's Bizarre Adventure series, Diamond is Unbreakable. He is shown next to three female coworkers when Yoshikage Kira is first introduced, telling the two women basic information about Kira.

Kira's coworker is an average looking man of a normal build, sporting short, wavy hair. His attire consists of a long sleeve suit, a bright shirt and a fishnet pattern tie, which is changed to a smooth patterned one in the anime.

Kira's coworker has a somewhat rude personality, telling his fellow coworkers to give up on inviting Kira to have lunch, calling him a "total buzzkill" and while he does compliment his hardworking nature, he says that Kira lacks passion and he's just a nobody who fades into the background in life.[1]

Despite this, Kira's coworker does show genuine worry for Kira later on. When seeing him injured, he asks Kira why he's bleeding and later screams in horror at the sight of Kira's chopped off hand.[2]

Kira's coworker is first seen after three of his female coworkers attempt to ask Kira to join them for lunch. Kira's coworker explains to them that Kira is a boring person and there's no reason to invite him over. He begins to list some basic details regarding Kira, such as his age, relationship status and more. Kira's coworker finishes his monologue by mentioning that Kira, while not a bad person by any means, is just a nobody and that he's the type of person that blends into the background of life.[1]

After Kira's temporary defeat against Jotaro Kujo and Koichi Hirose, Kira attempts to run away from them and encounters his coworkers. Kira's coworker is concerned for Kira after seeing he's injured and bleeding, and proceeds to scream in horror when seeing Kira's lack of a hand.[2] 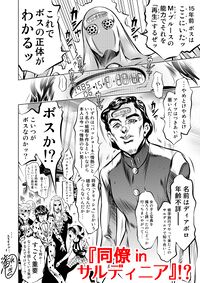 A drawing of Kira's coworker by Araki's previous assistant and artist for the JoJo anime, Reki Taki