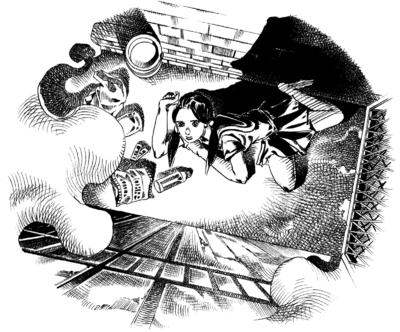 The Book Chapter 2: Dies irae
“
Even if you'll never forgive me for it, I can make it so that boy never gets near you again if I want. I have that power. A power only special people are endowed with. No matter how much that boy wants to meet with you, he will not be able to get near you.
”
—Teruhiko Futaba, The Book Chapter 3: Confutatis

It is an ability Stand that selects a target and prevents them from being perceived by anyone.

The appearance of the Stand is unknown, although there appears to be a gas-like substance surrounding the area that Akari Hirai is confined in.

Memory of Jet's ability is to target a particular location or individual, then isolate the target from the cognition of all other people, to stop anyone from getting access to it. Under the effect of this Stand, all people cannot enter the targeted location out of their own will because the location itself and the ways toward it are excluded from their minds, except Teruhiko himself. When Teruhiko activates this ability to confine Akari Hirai, though he is unaware of his Stand ability, the roof and building gap where Akari is trapped into seem to completely disappear from other people's sights, hence no one ever comes to the roof and looks down to the gap. The effect of the Stand is maintained on an annual basis, as long as Teruhiko still has the will to use this ability.[2]

It is suggested that only the person who is guided by Teruhiko can get access to the targeted location. With the leading of Teruhiko, Hanae Orikasa is the only one getting to know Akari being trapped into the building gap.

While the ability can last as long as desired, it is unknown how long the Stand power lasts on its own, and whether or not Teruhiko needs to continue to visit the target to recharge it.