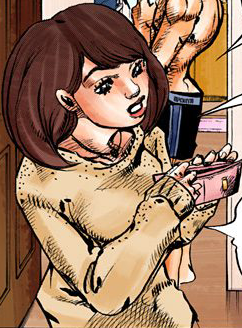 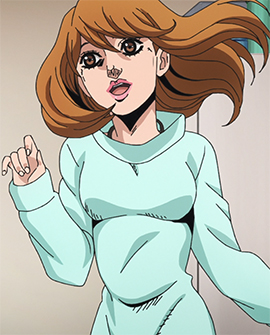 TSKR Episode 9
“
Get out of my apartment right now! I'm gonna call the police!
”
—Mika Hayamura, The Run

Mika Hayamura (早村 ミカ, Hayamura Mika) is a secondary character from the one-shot Thus Spoke Kishibe Rohan - Episode 9: The Run. She was the girlfriend of Yoma Hashimoto.

Mika is a woman of average height with medium-length hair and wears a sweater dress. She also has a necklace with a small locket.

Mika is caring of her boyfriend and recognizes his progress in fitness. However, she is also a victim of being exploited by him. Yoma takes advantage of her generosity by taking over her apartment, refusing to eat the food she cooked for the two of them, and stealing her money. Although she is disappointed in what he does, she lets the things he does go for a while without getting angry. When Yoma ends up going too far, she stands up for herself.

After her boyfriend Yoma Hashimoto becomes obsessed with fitness, Mika trips on the weights he leaves lying on the ground of her apartment floor and cries for him to put them away. She points out that Yoma has been gaining definition in his muscles lately and is impressed that someone could transform so quickly. Despite cooking walleye pollock roe spaghetti for the two of them for dinner, Yoma refuses to eat it because he's avoiding carbs. Mika becomes frustrated with Yoma canceling plans they made together and has to apologize to a deliveryman for Yoma threatening to murder him.

Later, she finds Yoma bouldering within her small apartment room and thinks he's insane. She demands to get back 270,000 yen Yoma stole from her credit card and threatens to call the police if he doesn't leave.

Rohan Kishibe later learns with Heaven's Door that Yoma broke Mika's neck on October 26 and hid her corpse in her room's walls, encased in cement.[1]