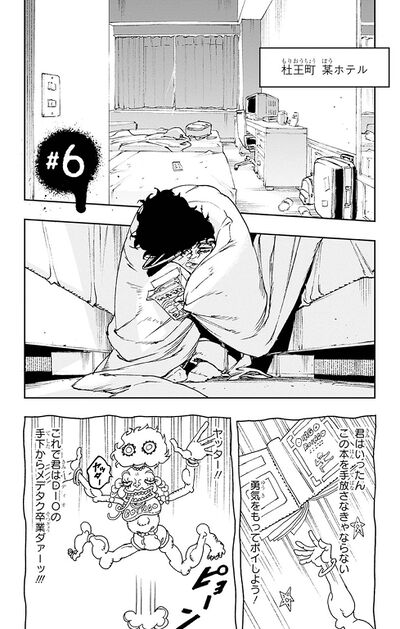 Sitting in a hotel room, Boingo thinks back to Tohth telling him that he has to part ways with the book for a while. Feeling nervous about not knowing the future anymore, Boingo recalls a memory of when his father sold the book for drinking money. However, Tohth reappeared by his side soon afterwards. Although DIO and his allies said Tohth was Boingo's Stand, Boingo feels that there really is a god named Tohth who chose him to be the keeper of the comic book. He wonders if Tohth left him to help him get over his fear of DIO. Deciding that he should go find the person who has his book, he takes a step to leave the hotel but ends up collapsing, too afraid to go alone.

Meanwhile, Hol Horse summarizes what they know about the parrot's Stand ability so far. He and Josuke wonder how they can do something about the bird before it attacks them first. They think they might be safe since they're in the subway and the bird probably won't come flying there. Josuke asks whether they should go look for Boingo but Hol Horse thinks having Boingo with them would weigh them down and just be putting him in danger since he can't fight. Josuke suggests that one of them should try acting as a decoy when they fight the parrot, when suddenly, a helicopter starts whirring behind them. Hol Horse starts trembling and wonders if he was that worried about hearing DIO's voice again. However, Josuke reveals that he also feels terrified all of a sudden and that something doesn't feel right. Just as the duo realize they're already under attack, they turn around and see each other's eyes are affected by Petsounds's Stand. They hadn't heard any voices, but they realize that it was the sound of the helicopter which triggered the ability.

Several civilians start running away from the illusionary helicopter. Josuke and Hol Horse witness a man getting shot by several bullets, but when they go up to him, they notice his wounds are all gone. Although the helicopter isn't actually there in the subway with them, everyone being controlled by the Stand is forced to reenact the scenario that the Stand is replaying from the parrot's memories. Hol Horse realizes that the scenario they're reenacting must be that they are citizens or rioters being shot down by a dictator's army in Egypt.

To make matters worse, a kid in front of them is shot by an arrow from a crossbow all of a sudden. Josuke realizes that it's a real arrow and not an illusion. He uses Crazy Diamond to heal the boy but then Josuke is also shot in the back. After Crazy Diamond takes out the arrow, Josuke furiously runs toward the mysterious enemy, planning to take him down.