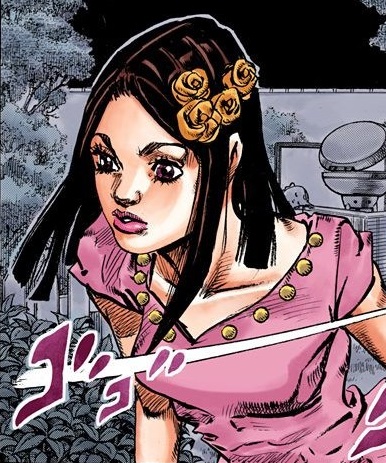 She is the eldest daughter of Noboru and Haruko Mochizuki. One night, during the harvest moon, she is stalked by the Moon Rabbit as she decides to meet her boyfriend.

Aki is a 21-year-old woman of average height and slim build. She has dark, shoulder-length hair decorated with flowers. She wears a simple dress decorated with bulbs around the collar and high heels.

The series is known for alternating colors between media, the information presented below may or may not be canon.
Skin(Fair)
Hair(Black with brown outlines)
Eyes(Violet)
Outfit
(Pink dress with yellow bulbs, black and blue shoes)

Aki gives off the impression of an innocent girl. She is shown to be paranoid of bees, disliking going out to the family's garden at night because there might be some. This fear is likely from a past experience of getting stung by a bee once when she was little.[1] She also wonders if she is allergic to bee stings like her grandfather, who died from an allergic reaction from one.

Despite her father's warnings of her family's curse, she decides to go out on the night of the harvest moon to see her boyfriend, albeit promising to herself to go out only for a short while. This gave the Moon Rabbit the opportunity to come out and almost kill her.

Aki and her family

Aki was born to the Mochizuki family, a family that suffers from a curse that makes a family member die each generation on the day of the harvest moon.

Aki is first introduced getting ready to leave the house on the night of the harvest moon, only to be stopped by her father, Noboru, who persuades her not to. Aki initially refuses, but after a further reasoning from Noboru she decides to stay put.

As the family is going out to their garden, Aki starts worrying about bees and about the possibility of having an allergy to them. Noboru reminds her that bees aren't nocturnal. Her younger brother, Takeru, decides to tease her by taking a photo of her cleavage. 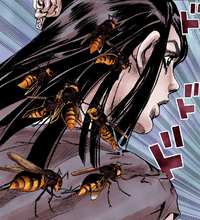 While going out, Aki is almost killed by hornets

While enjoying the harvest moon with her family, Aki hears her phone ringing, and while grabbing it she knocks over a pair of eyeglasses. Unbeknownst to her, the glasses causes a misplaced branch to fling one of the fish from its tank into Mitsu's mouth, almost choking her to death. The family eventually falls asleep except for Aki, who was talking to her boyfriend on the phone. Her boyfriend wants her to come outside, as he's parked just outside her house, but she refuses. However, after further persuading, she finally decides to go outside but just for a short while.

Unbeknownst to Aki, however, the Moon Rabbit emerges and stalks her as she leaves. Aki accidentally drops her jacket near a storm drain. She picks it up, little does she know of the hornets now clinging onto it. As she finds her boyfriend, the Moon Rabbit lets the hornets crawl up her hair, ready to attack. However, just before the hornets could kill her, Aki's boyfriend shows a box with a ring in it, revealing that he's proposed to her. Because Aki would no longer be part of the Mochizuki family, the Moon Rabbit is forced to redirect the hornets to a passing motorcyclist, who crashes.[1]