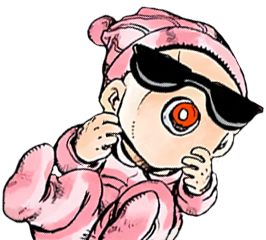 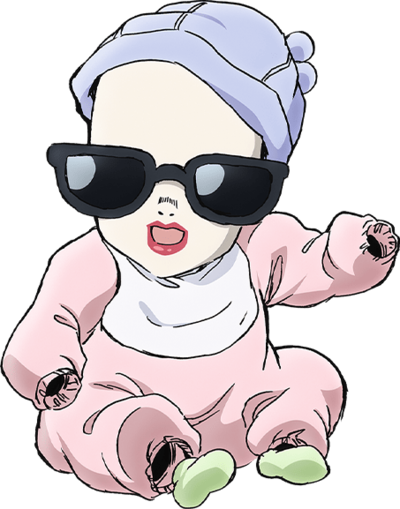 DU Episode 13
“
It's an invisible baby!
”
—Josuke Higashikata about Shizuka

Shizuka Joestar (静・ジョースター, Shizuka Jōsutā) is a tertiary ally featured in the fourth part of the JoJo's Bizarre Adventure series, Diamond is Unbreakable.

Introduced in the "We Picked Up Something Crazy!" story arc, Shizuka is a baby found on the side of a road in Morioh by Joseph Joestar, who subsequently adopts her. She is a Stand user who can turn invisible when distressed, with her Stand Achtung Baby.

Shizuka is a female infant approximately 6 months in age.[1] Her face is initially only visible when Joseph Joestar covers it in makeup and lipstick, upon which Joseph and Josuke agree that she is cute. She stays visible after Joseph adopts her,[2] besides when she is stressed.

Shizuka wears a range of soft, light baby clothing, including a small, bobbled knit cap, and large sunglasses. She occasionally wears a pacifier. In the anime, she is also sometimes seen wearing gloves.

Shizuka is a baby of average temperament who is generally calm and cheerful outside a few key moments in the story.

Her Stand activates when she is startled, frightened, or distressed, making her or her surroundings invisible. This phenomenon is noted to likely be a result of stress built up from being held by strangers other than her mother.[1] Just after Joseph adopts her, she's only comfortable around him. If he isn't nearby then she starts vanishing herself and everything nearby.[2] She seems to like posing with peace signs.[3][4]

Shizuka's Stand, Achtung Baby, can make her appear translucent or invisible. She can also cause everything within a certain range around her to vanish when particularly distressed.

The invisible baby saved from drowning by Josuke & Joseph

Shizuka helped Rohan Kishibe when he was attacked by Ken Oyanagi. To win the last rock-paper-scissors match, Rohan used his Heaven's Door on Shizuka to make her activate her Stand and force Ken's hand to use rock, allowing him to win the match no matter what Ken decided to choose. She was held hostage by Ken, but Rohan convinced him to let her go in exchange for another rock-paper-scissors match. She goes missing after Ken's and Rohan's battle and they, Josuke and Joseph look for her.