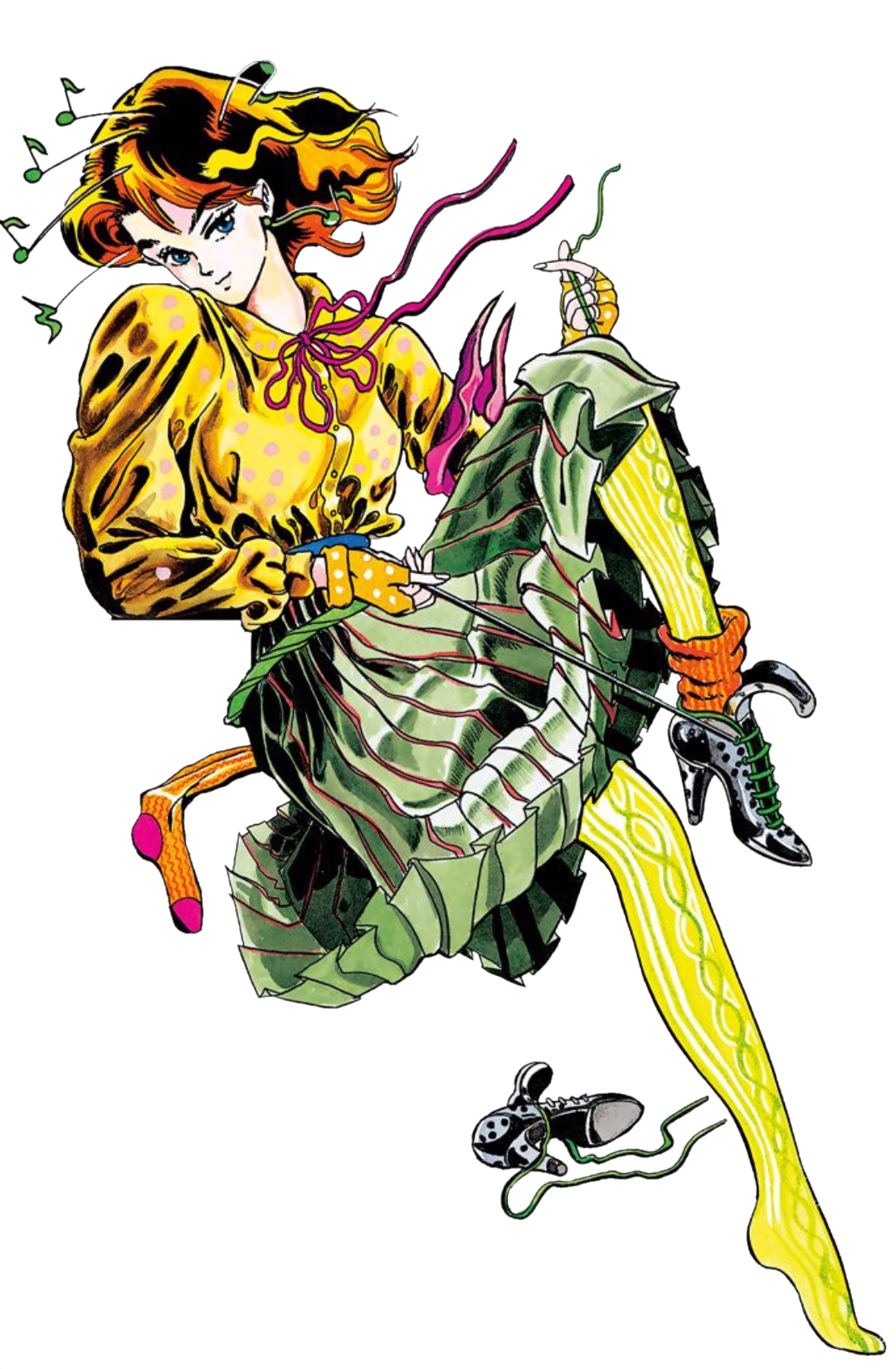 Irene Rapona (アイリン・ラポーナ, Airin Rapōna) is the protagonist of Gorgeous Irene. She is a teenage girl with a pure personality. Despite her innocent nature, she is secretly a skilled assassin nicknamed Gorgeous Irene (ゴージャス アイリン, Gōjasu Airin), with various techniques using makeup.

Irene is a fair young girl with light shoulder-length hair. She styles her hair differently, sometimes being in pig-tails or a braided ponytail. With her battle makeup, she can disguise herself to drastically change her appearance.

When battling as an assassin, her hair grows darker with her battle makeup and she wears a frilly dress.

Irene can either be a sweet girl or a bold assassin

Irene is depicted as being pure-hearted but is also extremely gullible. She trusts anybody, including strangers she just met who actually want to harm her. At one point, Irene is told that a flower is edible and she eats it without hesitation. When she meets the thug Michael, Irene also decides to hug him despite the fact that she could easily dispose of him and his threatening attitude. In the second chapter, Irene finds herself in Harlem and is trusting to the point of being ingenue. Case in point, she accepts a bag of drugs from a dealer and eagerly accepts when the dealer proposes to make her a "movie star", blissfully ignorant of the implications. She is caring of those she considers her friends, and listens to their assassination requests. As an assassin, Irene is quite cunning and ruthless. She can kill henchmen standing in her way without a second thought, and has a habit of turning her targets' weapons against them. For instance, she decided to make Lauper kill herself with her own chainsaw, and also returned an assassin's killer ants against her.

Normally, Irene is rather sensitive. When her faces is splashed with dirt, she's upset enough to begin to cry. However, when she applies her battle make-up, Irene's bloodlust flares up. She thus becomes much more bold, playful and assertive, fighting physically imposing foes without fear. She is also shown openly teasing her opponents and during her fight against Lauper, Irene strips on purpose to show off her body and seems to have fun performing tricks to outsmart her opponent and explain them. With her bloodlust up, Irene is quite lascivious. Firstly, she has a habit of stripping to show off her body. Secondly, she also regurlarly teases those near hear, for instance kissing a target's reflection and openly kissing her friend Michael in the mouth. More disturbingly, she also licks the blood of the tailor's son after collecting it with her finger.

Like her father, she takes loyalty seriously. She is saddened when a young man breaks their trust and friendship promise when he speaks about her to Lauper. She also feels sorry that she has to lie to people about her secret identity and can feel very lonely as a result.

In the second chapter when Michael asks her what she wants to drink, she asks for champagne, showing a taste for this particular beverage.

Irene inherits the deadly assassination abilities of her father, a man born in the underworld who became a killer.

When Irene puts on makeup, her spirit can change her entire body to match her disguise. She uses it to disguise herself either as an old lady or a young girl. 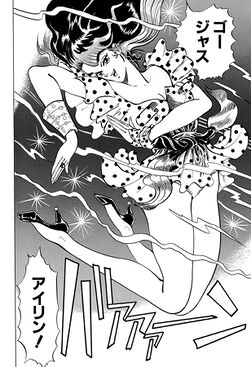 Wearing Battle Makeup promotes her killer instinct. She is capable of stopping a chainsaw that weighs 80 kg and has a 400cc engine with only her bare hands.[1] Her makeup is also capable of removing hazardous materials or objects that have entered her body by changing the muscles in her face. According to Irene, makeup in ancient times warded off diseases and the effects of poisonous insects.[2]
Execution Makeup(死苦へのメイクアップ Shikuhe no Meikuappu) 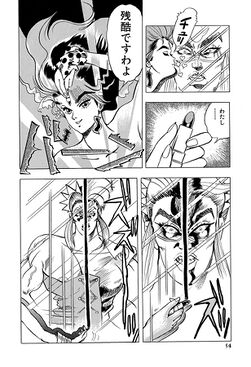 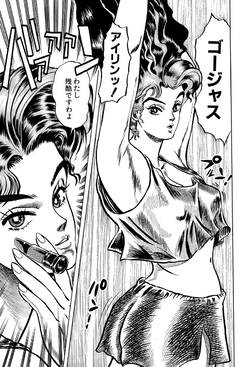 Similar in mechanics to Battle Makeup, only it's shown changing her muscles to expel fire ants from her face. She also mentions that it hides the sadness in her heart. 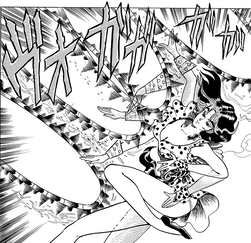 Irene strips off her dress and performs a seductive dance. She is extremely flexible and can easily dodge attacks in this state as well as learn the opponent's movements. If the opponent either smells Irene's perfume or gets her makeup on them, she can make the opponent her slave by controlling their heart, body, mind, and soul. An enemy with a "hard" soul will also have a hard body, no longer being able to move. With this, Irene can stop their movements and they will listen to what she tells them to do.
Fake Nails(つけ爪 Tsuke Tsume) 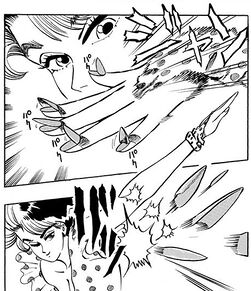 Irene can fire sharp fake nails out of each finger. As projectiles, they are as strong as knives and can easily scar or kill someone.

Irene is quite skilled in handling throwing weapons and firearms. When she throws her fake nails at a group of henchmen, she is able to hit them in the vitals (e.g. the neck or in the forehead). Likewise when she participates in a robbery, Irene is able to aim and shoot a man's baton and destroy it midswing.

Irene is intelligent and cunning in terms of battling. She is analytical and prepares ahead of time, such as when she disguises as an old lady to work for Lauper's gang and then replaces all their bullets with blanks. She keeps the real bullets hidden in a glove to make it look like she caught their bullets later on when they fire at her.

She prepares for assassins who are targeting her by planting mines in the floors of Michael's home. By doing so, she would also be protected from any sneak attacks while she was sleeping.

Irene is the daughter of a man from the underworld who had no wife. She inherited his deadly assassination abilities and secretly becomes an assassin as a side business while still going to school.[2]

Irene lives in a 17th century Rococo style house in a place known as Swingtown. She plays with a spider outside at school when a group of boys begin talking behind her back, making bets about how gullible she could be. One of the boys gives her some flowers and tells her they're edible and taste good so she should try them. As she is about to eat one, the boys are shocked she would actually do it and trip over each other. They land in a puddle and one boy's elbow splashes mud onto Irene's face. Irene begins to cry just before her butler appears and chases the boys away. Her butler then introduces her to a young man he brought with him, who has an assassination request. 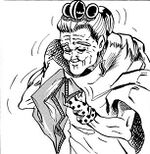 The man's father was a friend of Irene's father, and was killed by a gang leader named Lauper. The man pleads for Irene to avenge his father. Irene responds asking if he wants to make a friendship promise with her and the man agrees, kissing her palm. 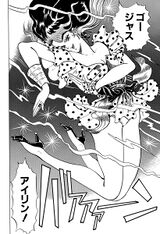 Irene after transforming into "Gorgeous Irene"

Irene infiltrates Lauper's gang while disguised as an old woman with her special makeup. The gang had hired her to do work like cleaning and reloading their weapons. Ten days later, the man is caught by Lauper and tortured after she learns he hired an assassin. The man tells Lauper about Irene, forcing Irene to take off her disguise and reveal herself. She transforms with her battle makeup into "Gorgeous Irene". Lauper's guards shoot their guns at her but they were actually replaced with blanks when Irene was working for them. Irene put their real bullets in her glove to make it look like she caught the bullets instead. She fires fake nails out of her fingers and kills all of the guards, while also scarring Lauper's face.

Angered, Lauper attempts to attack Irene with a giant chainsaw, but Irene dodges all of it and learns Lauper's movements with her special Death Dance. Irene's Heart Magic allows her to take control of Lauper's body after Lauper smells the scent of her perfume. She manipulates Lauper into cutting herself in half with her chainsaw by using her Execution Makeup. Irene expresses sorrow that the young man broke their friendship promise by speaking about her to Lauper. She lets him live because she had promised to and then leaves. 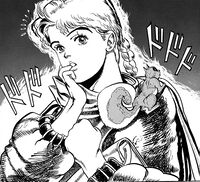 Irene's squirrel informs her the news

Irene walks alone in the slums of Harlem in New York City. A young man named Michael sees her and is shocked as to what a young girl is doing there on her own. Just then, a squirrel finds Irene, informing her that her butler was killed and assassins are after her. Michael suddenly grabs Irene's purse and knocks her down, demanding her money. He realizes she only has makeup in there and nothing else. Angered at Irene lacking fear, Michael takes out a knife. Irene simply grabs the knife with two fingers and then hugs Michael. Some thugs appear asking Michael to share Irene with them but Michael beats them up. 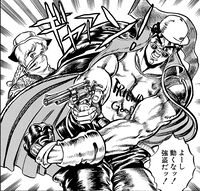 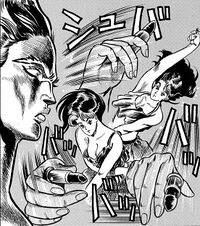 Drawing on the enemy's face

Michael later discovers the old racing stub that Irene bought was actually a big winner and moves to Los Angeles to start his music career. He eventually releases a debut single which refers to Irene as a mysterious girl, selling over 600,000 copies. Irene had vanished and no one had ever seen her again. On the seventh day of the month, a mafia boss named Tony Bormont had strangely committed suicide in his Chicago estate by stabbing himself in the throat. In the past, he had given the order to have many of his rival gangs across the U.S. assassinated. It is inferred that Irene killed him, as revenge for ordering her father's death in the past.

"Gorgeous Irene" is imprinted on an opera poster in the Naples Station stage of Eyes of Heaven. Other series by Hirohiko Araki are also listed, but Gorgeous Irene is written in large, bold text unlike the others.

The New York furniture has a cafe in the background belonging to Irene.