Showman of the Century Who Launched Oliver: Yoshio Kou 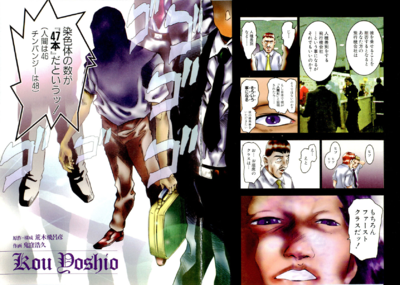 March 2003
“
If I just wanted to make money, I could hold a music festival with some famous musicians... But that's far too boring! What I want is something so bizarre that it'll have the attention of people around the world!
”
—Yoshio Kou

Showman of the Century Who Launched Oliver: Yoshio Kou (オリバー君を仕掛けた世紀の興行師『康 芳夫』, Oribā-kun o Shikaketa Seiki no Kōgyōshi "Kō Yoshio") is the third chapter of The Lives of Eccentrics series, written by Hirohiko Araki and illustrated by Hirohisa Onikubo. It was originally published in Ultra Jump on February 19, 2003 as the fifth chapter of the series.

In 1976, a 39-year-old man named Yoshio Kou prepares to board a plane to Japan, bringing with him a human-like creature with 47 chromosomes from the Congo named Oliver. Despite looking like a shaved chimpanzee, Oliver carries several human-like traits; as humans have 46 chromosomes and chimpanzees have 48, Kou intends to promote Oliver as the missing link between the two species. Kou brought the creature to Japan intending to present it on live television (and also intending to avoid the scrutiny of animal rights groups). Nippon TV presents him in a special program, resulting in their ratings rising to 22.5%. Magazines and newspapers covering Oliver quickly sell out as well.

Yoshio Kou was born in 1937 in Tokyo to a Japanese mother and a Chinese father. Despite being discriminated against due to his mixed blood, Kou's forcefulness and sinister gaze ensured that he was never bullied. Growing up during the war, Kou was conflicted about Japan's position in the conflict, and even more so regarding the shift in its culture after the war. In 1955, Kou struck a deal with a Korean yakuza to manage their finances and deliver food to local Chinese people. One day, Kou noticed a group of people fascinated by what was advertised to be a snake with the head of a woman. Fascinated by the audience's ability to wholeheartedly believe such a boldfaced lie, Kou went into show business.

Kou began his new career by partnering with Japanese businessman Akira Jin to bring Russian shows to Japan as a form of money laundering. Kou would go on to promote all types of events, including concerts, festivals, races, hunts for mythical creatures, and boxing matches. Later, in 1977, Kou would arrange a fight between a Bengal tiger and a karate master, only for the show to be cancelled at the last minute after animal rights groups contact the country's president. As a result, Kou would lose 180 million yen and leave Haiti in shame.

For the moment, Kou and Oliver arrive at a hotel and book a suite. Oliver's arms and legs are tied, and the broadcast begins. As cameras film her from behind, the woman takes off her clothes and prepares to mount Oliver. Suddenly, Kou bursts into the room and orders the event to be terminated, as tests have concluded that Oliver has 48 chromosomes and is thus a chimpanzee. Oliver breaks free of his arm restraints as the woman is dragged out of the room, despite her pleas to be allowed to continue.

The following day, July 23, 1976, saw the front pages of every newspaper in Japan filled with the revelation of Oliver's true identity. Of course, this had all been Kou's plan from the beginning. Though he would feign disgust at the bizarre experiment in public, Kou privately relished the spectacle of a mere chimpanzee being the single biggest story in the country. Kou continued producing public spectacles for some time after Oliver, but by 2002 his role has mostly been superseded by specialized advertising companies, to his irritation. When asked about the profit he has turned from his various ventures in an interview, Kou dismisses the question, stating that money is nothing compared to the thrills it can give birth to. Incidentally, Oliver is still alive as of the year 2003.