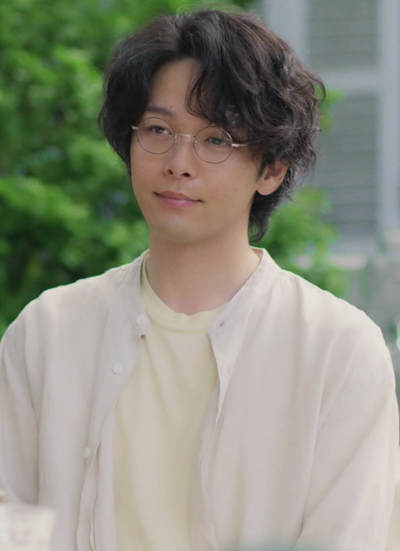 Taro is a Japanese man with a frail stature and delicate features. He has standard length wavy hair, with one fringe hiding a bit of his forehead. He wears round spectacles.

Not much is known about Taro's personality before his accident.

In the present, Taro is a placid amnesiac who exhibits mostly gentleness. He is gentle and serene, but to an abnormal point, and can be seen idling in a park. When interacting with Kyoka, he mostly listens to her and quietly smiles. He seems to appreciate Kyoka's dog and pets her often. He also prefers his coffee sweet and always puts large amounts of sugar in his cup.[3]

Similar to Mai Katahira's husband, Taro has a mannerism of scratching his head with his pinky finger and shares a liking for sweetened coffee.[1] He is also shown to have a great affinity with Mai's daughter Mao.

Taro before his accident

Taro Hirai was once a world-renowned photographer. He began his career in 2011 as a freelancer. In three years, he was quickly able to hold an exhibition for his name.[4] He was known for his unique style of photography that captured the urban mood of cities.[4]

While at the peak of his career in 2014, six years before the events of Thus Spoke Kishibe Rohan, he happened to be thirty minutes late to a Shumeisha meeting because of a photo session. Taro was then hit by a car while crossing the road. Taro heavily damaged his organs and lost his memories, which halted his career. Because his heart stopped beating, Taro required an organ transplant, and it is later revealed that he was the recipient of Mai Katahira's husband Akira's organs.[1]

Around some time before Kyoka Izumi met Rohan Kishibe, Taro began a relationship with Kyoka, who was a fan of his photography ever since she was a student.[1]

Taro is first seen idling in a park. His girlfriend, Kyoka, calls him and they go to a café. As they talk, Taro expresses discontentment with his current life and shows Kyoka a property he has taken an interest in, which is worth 3 million yen. This prompts Kyoka to invite Rohan to visit the property themselves. When Kyoka leaves to purchase the villa in the mountain village, she temporarily puts her dog in his care and says goodbye.

Later, Taro is hit by a car again because of the curse of the gods of the mountain, but thankfully survives along with the dog when Rohan Kishibe makes Ikkyu breach etiquette, forcing the gods to spare Taro.

Taro looks back at his former life

Kyoka and her dog Maron meet with Taro in the park. Still attempting to piece his memories back together due to his amnesia, Kyoka suggests that he turn off his electronics, "stand up on his own two feet," and find the "real, living information" for himself. Taro comes to a realization and agrees with her.

Taro is first seen in a park by himself before the story jumps to Rohan's house. Kyoka mentions Taro's name as she suggests a one-shot story idea to Rohan and even suggests his "hypnotherapy" to cure Taro the same way he did for Jugo Shishi. However, Rohan has had enough of her and throws her out of his house again.

Kyoka meets Taro at a café later, and she complains about Rohan's refusal. Taro thanks her for caring for him despite being busy, but Kyoka says that she actually has a lot of free time. Kyoka wants Taro to resume his photography, but he isn't sure about what he wants to shoot. Nonetheless, Taro has brought his camera after listening to Kyoka's previous words. Incidentally, Kyoka and Taro cross paths with Rohan at the same place. Kyoka asks Rohan to try his hypnosis on Taro, to Rohan's exasperation. While Rohan and his editor argue, Mai and Mao Katahira pass near Taro, and Mao pulls Taro's shirt, saying "Hello" in reverse to him. Unfortunately, the tug makes Taro fall and bump his head on a wall. While everyone goes to a hospital to have Taro treated, Rohan is intrigued by Mao's eyes. In the hospital, Taro quickly returns and is thankfully well, but must undergo further testing. When Mao grabs his arm again, Mai is embarrassed and goes away as quickly as she can. Taro is brought back into his hospital room for further examinations but later leaves the building and goes to a park.

At the park, Taro is sitting on a bench and tries his camera. Mao, who had run away from home, walks in front of him and sits beside him. She greets him in gibberish, but Taro quickly understands her, and they quickly bond with each other. When Rohan, Kyoka, and Mai arrive at the park, Mai hears Mao laughing and is relieved when she sees Taro playing with Mao in the playground. Taro is also unusually lively and happy with the little girl. Likewise, Mai is awed that her girl is now smiling and laughing. Taro meets Mai and asks for Mao's name. At the same time, Mao runs off and is almost run over by a car. Thankfully, Rohan manages to catch up to Mao and lifts her out of harm's way. Curious, Rohan turns everyone into books. Tossing Kyoka's magazine out of the way, Rohan reads Taro and learns the circumstances of his accident. He learns about his damaged organs and his emergency operation. Confused by some black pages, Rohan remembers that Taro's heart stopped and theorizes that he was dead at this precise moment. Seeing that some of his pages are now colored yellow, Rohan has a eureka moment and turns it into a Pop-up book, making the spots of color in Taro's page pop out of the book. Doing the same with Mai and Mao, Rohan connects all three "souls" through the paper hands reaching out of the books.

Later, Taro, Mao, and Mai walk together, relieved that Mao is well. Mao says she's thirsty, and Taro buys her a can. When he returns, Taro sees that Mai is worried about him and reassures her, pointing out her forehead wrinkles. Embarrassed, he also scratches his head with his pinky, which makes Mai think of Akira. Moreover, he also offers a can of sweet coffee to her. Mai remembers Akira's words, who promised that he, Mai, and Mao would be fine. Realizing she may have found love again, Mai smiles and fights back tears of joy. She quickly joins Mao and Taro. All three walk away, holding each other's hands.

Sometime after, in Rohan's home, Rohan and Kyoka wonder how Mao could have known about Taro. Rohan theorizes that genetics could contain the memories of the soul. Thus, Mao carried some of Akira Katahira's soul and was connected to him. Kyoka views this as Mao guiding her mother to her late father's soul. Rohan comments on her optimism despite being "dumped" by Taro, and although she feels some sadness, she acknowledges that it was for the best.

Taro later takes up photography again, but his style of capturing images is no longer the same as what Kyoka used to like, becoming more "soft and warm" than his former style of urban photography.[1]