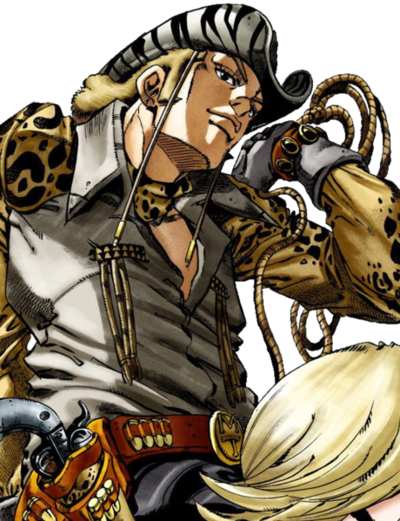 Executed by gunshot to the head via Blackmore

Working as a cowboy and bounty hunter, Mountain Tim is announced as a leading competitor in the Steel Ball Run. During the first stages of the race, Tim becomes one of Johnny and Gyro's allies. He is also a Stand User and is able to shift through his lasso with his ability, Oh! Lonesome Me.

Mountain Tim is a man of average to above-average height, average build and has light hair. He later acquires a scar crossing his face.

He wears a stereotypical range of cowboy attire; his hat has a zebra print with a miniature cow's skull as a decoration, while the clothing on his upper torso is coated with a leopard print, his belt gun holster, and his scarf has a leopard print. He wears a sheriff's badge in the shape of a five-pointed star on his left side.

The series is known for alternating colors between media, the information presented below may or may not be canon.
Skin(Fair)
Hair(Blond)
Eyes(Blue)
Hat
(Black and white zebra print with a white cow skull and orange accessories)
First Outfit
(Gray dress shirt with yellow and black leopard print sleeves, gray gloves with brown and gold bracelets, dark gray pants, white boots.)
Second Outfit
(Tan neck belt, gray shirt and coat with a yellow and black leopard fur on the neck, white gloves with yellow bracelets, white pants and boots.)
Belt and holster
(Orange leather with a golden-yellow buckle, golden-yellow bullets.) 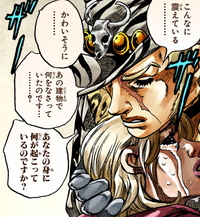 Mountain Tim is introduced as a benevolent bounty hunter who is well acquainted with the law and is stated to have made many friends.[5] Although he participates in the Steel Ball Run, Tim quickly abandons his goal to give chase to a participant assassinating the competition. It seems his benevolence is such that horses intuit a sense of great respect for him, bowing their heads when he approaches.[6] At the moment of his death, Mountain Tim confesses that he never expected to die a peaceful death but longed for at least a place to return after his journey.[7]

Mountain Tim usually maintains a cool-headed demeanor. Although he makes the occasional disinterested quip, Tim is serious most of the time.

Tim becomes attracted to Lucy Steel upon their first meeting, notably suavely picking and offering her flowers and sighing that she's a married woman.[8] During their second meeting, he actually confesses his love and ultimately respects Lucy's loyalty to her husband.[9] Tim goes to great lengths to protect Lucy, immediately coming to her aid when she calls for help despite breaking into the President's office and keeps silent when Blackmore interrogates him.[7]

Mountain Tim's Stand, Oh! Lonesome Me, permits him to spread his entire body along a rope of his equipment.

Mountain Tim is a very competent horse rider. He is said to travel annually 4,000 kilometers through pasture with 3,000 cattle, implying a great deal of experience in riding a horse throughout the United States. He was renowned enough as a horse rider to be considered a favorite even before the race began.[10] His skill is demonstrated when he managed to reach the 4th place during the disputed first stage of the SBR race[4] and managing to catch up to Gyro Zeppeli and Johnny Joestar during the second stage while they had a significant headstart.[11]

His mysterious mastery of equestrianism goes beyond horse riding, horses seem to greatly respect Mountain Tim and bow their heads when in his presence.

While in the army, Mountain Tim awakened his Stand in a Devil's Palm

Mountain Tim hails from Wyoming.[12] In 1875 when Mountain Tim was 16, the young man was already part of the army. Tim's unit was assigned to venture out into the uncharted areas of the Arizona desert. The area turned out to be the Devil's Palm, and his unit became lost while wandering through it. Unable to find water, the horses died, with the soldiers dying soon after. Tim was also nearly fried to death - but woke suddenly in the middle of the night to discover that a tiny bit of dew had collected on his rope and his body, having merged with the rope, was absorbing the water on its own. He was the only survivor.

In the following years, Tim began working as a cowboy and bounty hunter. As a cowboy, he annually travelled 4,000 km through the pastures with 3,000 cattle.[12] As a bounty hunter, he's hunted wanted man from northern Montana to southern Texas, become renowned in his line of work and trusted by the authorities.[5] His skill and sense of justice made him actually famous in the country.

Racing in the SBR

Mountain Tim registers as one of the participants in the Steel Ball Run. As a renowned cowboy, he attracts the attention of the media and is seen as one of the favorites. In the first stage, Mountain Tim and manages to cross the finish line at the fifth place, ending at the fourth place because Gyro Zeppeli is demoted to 21st place. 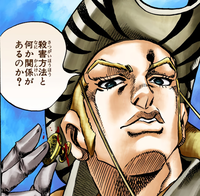 After ranking 4th in the first stage of the race, he is called in to help with the investigation of a gruesome murder which took place along the race's course. Three participants have been mysteriously disemboweled. Arriving on the scene, Tim looks at the horseshoe prints and notices that one horse with a distinctive triangular dent at the center of its horseshoe had briefly gone out of control near the corpses, meaning its rider was the killer. He also retrieves a button from a victim's jeans that mysteriously come off, hinting at the method of the killer. The sheriff deputizes Tim, requesting that he pursue all potential suspects and believing that Tim himself will be targeted by the culprit as one of the race forerunners. Tim secretly abandons the race to focus on finding the murderer.

Incidentally, Mountain Tim meets Lucy Steel near the crime scene. Charmed by her, Tim offers her a bouquet of wild flowers he takes nearby.

Once the second stage starts, Tim follows the distinctive horseshoe prints found at the murder. Stumbling upon Mrs. Robinson's horse, he briefly checks it and confirms Robinson isn't the culprit but that the murderer has passed recently on the route that Johnny and Gyro are taking. He eventually confronts a rider who seems to be Johnny Joestar. Johnny (in reality Benjamin Boomboom disguised as Johnny) throws his horseshoe at Tim, splashing him with a bit of blood and flees in a massive brier patch, but Tim easily lassos him around the neck - making use of Oh! Lonesome Me to prevent "Johnny" from cutting the rope. "Johnny" still manages to do so, however, and flees on his horse while reverting his face to normal. Tim, now believing Johnny to be the killer, begins his hunt for the real Johnny - not aware that now he, Johnny and Gyro have all been affected by the Boombooms' ability and will explode upon getting too close to each other, due to the magnetic pull. 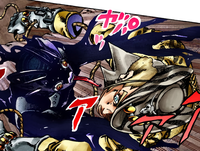 Tim eventually catches up to the duo. As Tim gets closer, Johnny and Gyro realize that he must have been affected by the Boombooms' ability as well. Gyro ends up using a Steel Ball destroy the iron-rich rocks nearby and turn them into gravel that flies in the face of Tim. Tim is unhorsed, but unfortunately, the trio were already too close and Tim goes flying toward Gyro and Johnny. However, he manages to stop the potential impact by utilizing his Stand ability and pulling himself onto a high rock. Once Johnny and Gyro explain about the Boombooms' ability, Tim comes to realize that he had been chasing the wrong suspect. The Boomboom Family soon reappears, attacking the trio using their Stand and sending them colliding with each other. They are ultimately defeated by Johnny's awakened Tusk ability and Tim urges Johnny and Gyro to hurry and leave the area, as they all seem to have ended up in a Devil's Palm. The trio are then the first three to reach the midway checkpoint of the second stage.

Soon, Oyecomova arrives and Tim catches him in the hotel room rifling through Gyro's things. When he grabs Oyecomova's shoulder, a chunk of skin comes off and soon blows up, heavily injuring Tim. However, Tim was able to scatter his body parts and survives. He warns Gyro when Oyecomova tries to attack, telling the secret the latter's ability. Tim subsequently drops out of the race to recover and devote his entire attention to assisting the sheriff.[13]

After saving Lucy, Tim is confronted by Blackmore

In Kansas City, Mountain Tim is called by Lucy Steel who is cornered in a government building. He rushes to her side and sneaks through the vents, using his power on Lucy to enable her to disassemble along his rope and sneak out of the building. The two go to a warehouse and reveals that he has loved her since their first meeting. He is disappointed when she apologizes for having potentially led him on and reaffirms her loyalty to Steven Steel. Tim still advises her to seek out Johnny and Gyro if she gets into trouble. After he and Lucy Steel go their separate ways, Tim is confronted by Blackmore, who had traced the call from the government building to him. Tim draws his gun and hits Blackmore in the chest once. Blackmore merges with the rain and evades the attack and Tim disassembles himself to bind and shoot Blackmore in the head. But, Blackmore yanks the rope, pulling Tim in the trajectory of the immobilized rain drops that cut open his head. On the ground, Tim is compelled one last time to reveal who was the caller but Tim only says he never expected to die quietly and only wished for a place to return to. Mountain Tim is subsequently shot in the head by Blackmore.