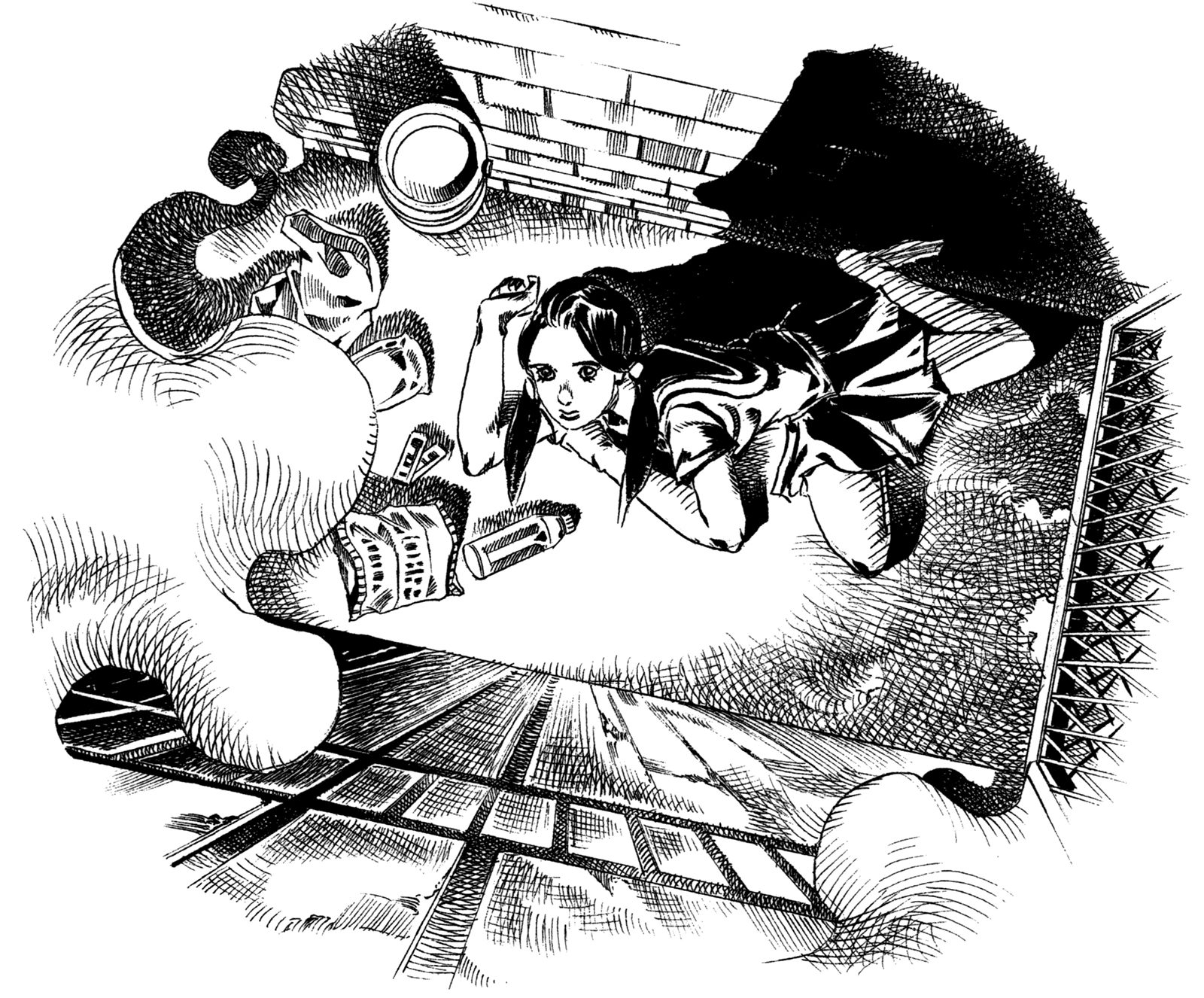 The Book Prologue: Introitus (Mentioned only)
The Book Chapter 1: Kyrie (1st full appearance)
“
While he hasn't gotten the location of the money out of me, I don't think he'll kill me. He's said that if I call for help, he'll harm my mother and father. Please contact the police without letting him find out about it...
”
—Akari Hirai, The Book Chapter 2: Dies irae

Akari Hirai (飛来 明里, Hirai Akari) is a minor character featured in The Book: JoJo's Bizarre Adventure 4th Another Day, a novel based on Diamond is Unbreakable.

Akari is a good-looking young woman with medium build and long black hair.

Born in a peasant family Akari dreamed of a better life. Feeling embarrassed by her rural hometown and her family's origin, Akari left the countryside to study in the city and then work in Morioh.

Akari is somewhat naive, as she agreed to meet Teruhiko alone on a rooftop even after someone had claimed he was a criminal and revealed her knowledge to him.

Her ability to cling to hope despite months of imprisonment in an alley is a testimony of her inner strength of character. During her last months, Akari had clung to the presence of her child Takuma inside her womb, thinking that she wasn't alone in the alley as long as Takuma was here. Akari ultimately sacrificed herself in order to save Takuma from the alley.

She is also caring of her parents, and even when she regains her voice, she doesn't call out for help due to Teruhiko's threat of killing her parents should she somehow leave the alley.

Akari Hirai was a young girl who lived in Morioh when it was still a rural town. However, she wasn't interested in Morioh's history and wanted to leave as soon as she could, fearing she would live her entire life in a farm. She left Morioh in search of a job, but went back after not succeeding in her objective. To her surprise, Morioh developed quite well in the meantime. Later, she took a job at a home-sales office as an office clerk, and moved to a one-room apartment near the station. Akari eventually fell in love with a young architect named Teruhiko Oogami.[1]

Akari Hirai was a woman who held a kind relationship with Teruhiko Ogami. She suddenly received a dial from Hanae Orikasa, and was warned by her about Teruhiko's secret of selling defective houses and found the money he made from it. Akari confronted Teruhiko about his secret on their company's roof, but was strangled by him and pushed from the roof. Though miraculously alive, she fell in the gap between two buildings and was trapped there by Teruhiko's Memory of Jet.[1] Teruhiko tried to poison her, but after Akari revealed she was the only one who knew where she put his money, he was forced to keep her alive, but warned her that, should she call for help, he would kill her parents. Teruhiko constantly tried to convince her to reveal him the location of the money and so he would set her free, but she thought he would kill her instead. Later, Akari was astonished to find out that she was pregnant with his child.[2] Though considered performing abortion herself out of her resentment of Teruhiko, Akari eventually decided to keep his life. Akari gave birth to him in the gap after living there for months, and made a deal with Teruhiko that she would tell him the location only if he kept her child alive.[3] After seeing the evidence of the child being put in a temple and picked up by the orphanage, Akari revealed the money was actually always next to her. Unfortunately, even after Teruhiko picked up the money, he didn't set Akari free and never showed up again. Soon after, Akari died of weakness.[4]