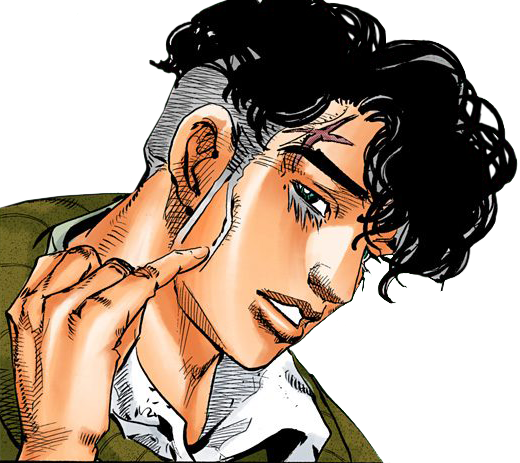 Thus Spoke Kishibe Rohan - Episode 8: Deoxyribonucleic Acid
“
This scar on my forehead, did it scare you?
”
—Obanazawa

Obanazawa (尾花沢, Obanazawa) is a character featured in the one-shot Thus Spoke Kishibe Rohan - Episode 8: Deoxyribonucleic Acid. He is the biological father of Tomoya and Mao Katahira.

He doesn't appear in the TV drama adaptation; instead, his role is replaced by Taro Hirai.

Obanazawa is a tall and athletic Japanese man with messy curly black hair, thick eyebrows and a distinctive scar on his forehead. He has no upper eyelashes, thick lower eyelashes, and sideburns that grow to his jaw.

He dresses in a long sweater and black pants, carrying a large backpack with him. He has an abnormal quirk where his feet are soaking wet when he walks, which Mao inherits.

The series is known for alternating colors between media, the information presented below may or may not be canon.
Skin(Fair)
Hair(Black and gray)
Eyes(Green)
Outfit(Green coat, white shirt, black pants)

Obanazawa is calm and gentle. He is aware that he may look intimidating because of the scar on his forehead and tries comforting Mai Katahira to not be afraid of him. He is friendly with children such as his biological daughter Mao. He manages to comprehend her abnormal manner of speech, and can even make her speak coherently afterwards.

After falling off a cliff on a hike during his high school years, Obanazawa no longer does anything dangerous. He doesn't drive either, and calls a taxi instead.

Fifteen years before the events of "D.N.A.", Obanazawa was in high school and went on a hike. He fell off a cliff but survived, although his parents tell him that he was clinically dead for a moment.

Obanazawa once donated to the sperm bank three years prior to the story. At the time, he was 30 years old and lived in Yamagata City. Mai Katahira underwent artificial insemination with his sperm and gave birth to Mao, a girl with strange characteristics and several unusual features like a vestigial tail and the ability to camouflage.

Obanazawa was also married and had a son named Tomoya. However, he and his wife divorced. Since then, Obanazawa has partial custody of Tomoya. Having passed the bar exam recently, Obanazawa currently works as a rookie lawyer in a firm in Yamagata city.

One day, Obanazawa fatefully meets Mai at a train station. He briefly tells her that she can go ahead of him to use the vending machine and then leaves to pick up Tomoya at the park. Suspecting that he's Mao's biological father, Mai follows him. At the park, Obanazawa picks up his son and calls a taxi so they can leave. As a prank, Mao used her camouflage ability to make Tomoya look like her, fooling Mai into thinking that Obanazawa is kidnapping Mao. However, the misunderstanding is cleared and Obanazawa reassures Mai. When Mao speaks backwards, Obanazawa immediately understands that she's saying she's thirsty and hands her a can of soda that he bought earlier at the train station. Obanazawa, Mai, and their children decide to walk together, as the two parents begin to develop feelings for each other.