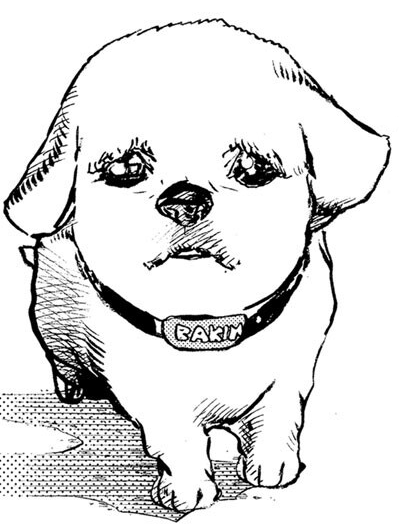 He is a puppy belonging to Rohan Kishibe in Hot Summer Martha and Drip Painting Style.

Bakin is a small puppy resembling a Labrador Retriever. He tends to have a sad look all the time. He wears a collar with his name on it.

When he is around seven months old, he appears much larger and overweight. While being raised by Yabubako-Hoshi, his eyes appear cloudy at this age.

When he is young, Bakin is quiet and observant of his surroundings, looking at whatever Rohan is examining. When he is around three months old and finishes teething, he starts getting mischievous by ripping apart all of his toys.

Around seven months old, Bakin grows extremely aggressive due to being raised by Yabubako-Hoshi instead of Rohan. He kills a crocodile and nearly attacks his owner before trembling in fear upon seeing his leash, due to Yabubako-Hoshi abusing him.

When all of Yabubako-Hoshi's actions as Rohan's doppelgänger are reverted, Bakin is back to normal and reacts happily to being petted.

Bakin was born around June 2021[1] before Rohan starts raising him. The news of Rohan getting Bakin spread around in either a magazine article or on the internet.[2] 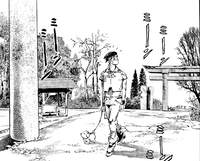 Walking with Rohan at the Mutsu-kabe Shrine

On July 7, Bakin watches the rain fall on Mutsu-kabe while in Rohan's arms. Later, Rohan goes to give him food but accidentally drops the container and it shatters on the ground. Despite the glass pieces, Bakin tries getting the food until Rohan stops him. Bakin gets another snack from Rohan instead, who pets him while he eats.

Rohan and Bakin go on a walk together and eventually reach Mutsu-kabe Shrine. Rohan carries him while examining the sacred tree. After Rohan sees his reflection in the mirror, Yabubako-Hoshi takes the form of Rohan and leaves the tree with Bakin for three months. In the meantime, Bakin's teeth fully grow and he destroys all his toys. When Yabubako-Hoshi returns to the tree on October 7, it takes Bakin with it as well, returning him to Rohan's side.

Rohan tries to undo Yabubako-Hoshi's actions but ends up letting him free for another three months. During this time, Yabubako-Hoshi mistreats Bakin and he grows ferocious. He tears open the stomach of Eve's crocodile and almost attacks Rohan until Rohan shows him his leash. After seeing the leash, Bakin withdraws and trembles in fear, suggesting that he was abused by Yabubako-Hoshi. Rohan wonders what the creature did to his dog.

After Rohan reverts the actions of Yabubako-Hoshi, Bakin is back to being gentle and reacts happily to Kyoka petting him under his chin.[3]

An eco-terrorist mentions to Rohan that he heard about Rohan getting the puppy recently. He claims that although Bakin can live an average dog's lifespan of 15 to 20 years, Rohan's memories with Bakin will soon become painful due to the consequences of global warming affecting the Earth's environment. If the Earth's environment is devastated, then Bakin won't be able to live a happy life.

Later, after Rohan prevents the eco-terrorist from blowing up Morioh's power plant, Bakin watches Rohan cry while working on Pink Dark Boy. Kyoka pets Bakin as she leaves. Although she tells him that she thinks Rohan's story has a happy ending, she looks downhearted.