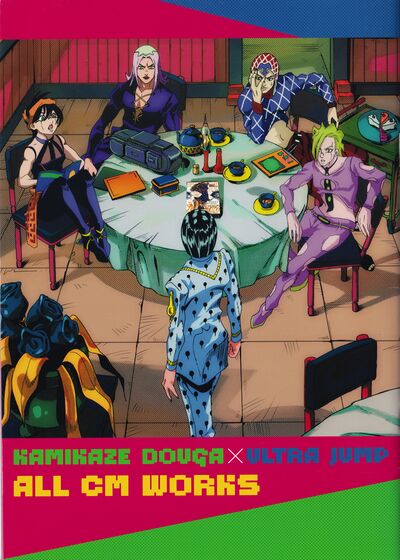 Ultra Jump CM (ウルトラ ジャンプ, Urutora Janpu) was a series of TV commercials produced by Kamikaze Douga that were created in order to promote Ultra Jump magazine. The commercials aired from 2012 to 2016 and were themed around different parts of the series, including Diamond is Unbreakable, Vento Aureo, Stone Ocean, and JoJolion. Characters that appear in the commercials were also voiced by their respective voice actors from the video games JoJo's Bizarre Adventure: All Star Battle and Eyes of Heaven.

On June 19, 2014, a special booklet titled Kamikaze Douga x Ultra Jump ALL CM WORKS (神風動画×ウルトラジャンプ ALL CM WORKS, Kamikaze Dōga × Urutora Janpu Oru CM Wākusu) was included in the July 2014 issue of Ultra Jump. The booklet featured the behind the scenes of the first two commercials for Part 4 and Part 5, with storyboards and various production notes from the staff at Kamikaze Douga.[1]

In the first commercial, Okuyasu is with Josuke and Koichi, reading JoJolion. Okuyasu tells Josuke not to ignore what he says. In reply, Josuke says that he's reading an article about "JoJo Exhibition", to which Okuyasu excitedly reacts to and urges Josuke to let him see. Afterward, a magazine can be seen dropped on the ground as Josuke and Okuyasu converse.

In the second commercial, the same scenario as the first commercial plays through. This time, Okuyasu snaps at Josuke to stop ignoring him.

In the third commercial, the same scenario plays through, except the characters are now sitting in a snowy setting. Okuyasu snaps at Josuke to stop ignoring him, but Josuke shows Okuyasu a series of new Ultra Jump features, such as VS JOJO and JORGE JOESTAR. The magazine is dropped to the ground, near a colony of Harvest.

In the fourth commercial, Yoshikage Kira can be seen walking in the foreground as Okuyasu is reading JoJolion. The Hand appears behind Okuyasu as he snaps at Josuke not to ignore him again. Yukako Yamagishi can also be seen behind the OWSON's window staring at Koichi. Conversing via their Stands, Josuke tells Okuyasu that Araki is introducing a new art book: JOJOVELLER. Okuyasu exclaims the details of the new art book: a latest illustration collection, a history book, and a Stand dictionary. Afterward, the magazine is dropped on the ground once again but this time, the magazine is heavier from Echoes' 3 Freeze.

In the first commercial, Bruno Bucciarati drops an Ultra Jump Magazine at a table where Team Bucciarati is sitting and says that they must get the artbook JOJOVELLER, from the orders of the Boss. Narancia Ghirga and Leone Abbacchio enthusiastically describe the upcoming art book and ask if they could get it in Capri. However, Guido Mista panics when he sees the magazine since it's the April issue, so it's the fourth month. To hammer the point, Rolling Stones drops in the background and turns into a "4". Mista prepares to shoot the magazine, and the rest of the team yells to prevent him from doing it. Sex Pistols pass a bullet among themselves before sending it into the screen.

In the second commercial, Narancia is the one who mostly describes the content of the Ultra Jump. The Sex Pistols also appear when Mista aims at the magazine. Bucciarati says to Mista that it's the May issue.

The third commercial features Bruno saying that they must get the latest volume of JoJolion instead, and Pannacotta Fugo describing his impression on the part. Mista freaks out because he is reminded of Part 4 when Bruno mentions "Josuke" and "Morioh". Confused, Bucciarati points out that JoJolion is Part 8.

In the fourth commercial, Giorno Giovanna is present. Abbacchio reads about the upcoming JoJonium release. Mista suggests that Giorno should be the one to collect it since he's the new guy, but Bucciarati tells Mista to do it instead. A dispute ensues between Mista, who says that even bookstores have a lunch break, and Bucciarati, who summons his Stand Sticky Fingers. The other Stands of Team Bucciarati can also be seen.

During the first few months of the airing of Part 5's anime adaption, the characters from the part were present again for commercials, but in a completely different style than the previous commercials. Giorno (in the first commercial), Bucciarati (second), and Abbacchio (third) describe the content of the Ultra Jump with dynamic transitions themed after their respective Stand. They are now voiced by their respective voice actors from the anime, and the commercials use artwork taken directly from the original manga.

In the first commercial, Jolyne Cujoh and Ermes Costello are brought to Green Dolphin Street Prison. In the bus, Jolyne asks Ermes what she's reading, to which the latter angrily points out that it is Ultra Jump. Ermes mentions they've included a figure of Iggy this month and Jolyne asks if Ermes is smuggling it in prison inside her breasts. The two go crazy over the figurine.

In the second commercial, Jotaro Kujo visits Jolyne, who is angry to see him. However, she sees the Ultra Jump limited badges. Jolyne reacts enthusiastically when she realizes Jotaro is going to bring her this month's Ultra Jump but still brings out Stone Free. Jolyne then sees the latest volume of JoJolion and finally reconciles with her father. The word Ultra Jump is marked on her arm.

In the third commercial, Enrico Pucci discusses with DIO. Pucci sees DIO reading an Ultra Jump magazine and asks if it is linked to the 14 words. Pucci becomes excited when he sees Ultra Jump's special badges and begins to recite the 14 words (some replaced by "Josuke", "free gift", and the likes). Pucci excitedly presents Mari Shimasaki's new series Crown of Ariadne as he unlocks Made in Heaven.

Josuke Higashikata and Yasuho Hirose walk on the street and Josuke reads Rozen Maiden while Joshu Higashikata stalks them. Josuke wonders what is this month's gift and is ecstatic when he sees that it is an artist set for Rohan Kishibe. Yasuho asks to also see the magazine but Josuke refuses. Josuke is seen spilling a sesame honey dumpling and the filling stains the screen while creating the word "Shueisha".

In the second commercial, Josuke is with Daiya Higashikata, who observes him reading Monogatari. Josuke discovers that this month's gift is a JoJolion T-shirt given to all applicants at a contest, in which Daiya says suits her well. She then promises Josuke to give him a dango if he gives her the shirt. Part 4's Josuke also appears behind a window.

In the third commercial, Josuke is with Tsurugi Higashikata, who observes him reading Lady and Old Man. Josuke discovers that this month's gift is a Diamond is Unbreakable T-shirt given to all applicants. Tsurugi points out that it doesn't make sense. Part 4's Josuke and Okuyasu are visible behind a window. Harvest, Kei Nijimura, Born This Way, and Yotsuyu Yagiyama can be seen in various shots.

In the fourth commercial, Josuke is with all three from the previous commercials, and the gift is the same as in the third commercial.