The Genius Who Made Edison Cower: Nikola Tesla 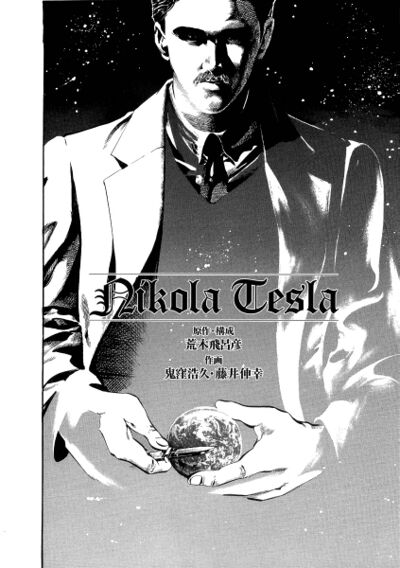 The Genius Who Made Edison Cower: Nikola Tesla (エジソンを震えあがらせた大天才 『ニコラ・テスラ』, Ejison o Furueagaraseta Daitensai "Nikora Tesura") is the first chapter of The Lives of Eccentrics series, written by Hirohiko Araki and illustrated by Hirohisa Onikubo, with assistance from Fuji Nobuyuki. It explores the life of Serbian-American scientist Nikola Tesla, his rivalry with Thomas Edison, bizarre manias and phobias, as well as his his accomplishments as an inventor.

It was released in the June 1989 issue of Super Jump and was later reprinted in twelfth issue of Manga Allman magazine in 2001.

The story begins in 1898 in the city of New York, where Tesla is showing his latest experiment to the members of the local press: a machine capable of splitting a huge steel block in half by creating a countless number of small vibrations and directing them at the block. The experiment is successful and the machine proves to be more powerful than expected. A flashback of the scientist's childhood shows "Niko" and his first inventions, among them a solar hair dryer and a mouse powered sewing machine. Also described are his strong phobia of round-shaped shiny objects and his fascination towards the power of electricity.

In 1884, five years after seeing a light bulb for the first time, a 28-year-old Tesla immigrates to the United States, becomes a member of the Edison Company and meets Thomas Edison for the first time. Soon the relationship between the two collapses because of Edison being unable to accept his employee's talent. He later fires Tesla, claiming that his theories concerning alternating current are too dangerous to be put into use. Short of money and unable to find somebody to fund his research on AC because of the derogatory rumors spread by his former employer, Tesla is forced to accept a humiliating offer from Westinghouse's company: he will have to hand over his patents to the very company. At the 1893 World's Columbian Exposition of Chicago Tesla finally proves the world of the usefulness and safeness of AC.

The final pages of the chapter are focused on Tesla's later years: his growing obsessive compulsory disorders, the 1915 Nobel rumors, his sentimental life and his beloved pigeon, along with his death in early 1943 and the Alien Property Custodian of his belongings ordered by the FBI.