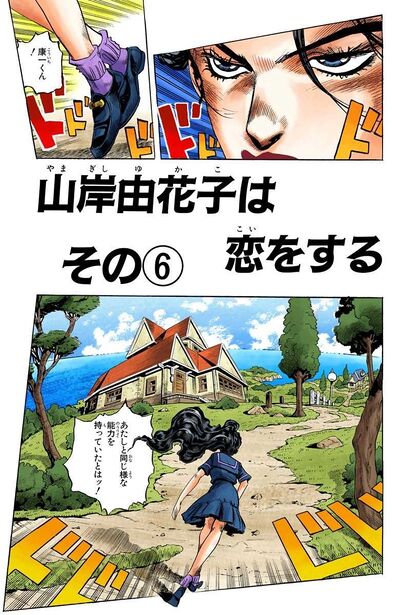 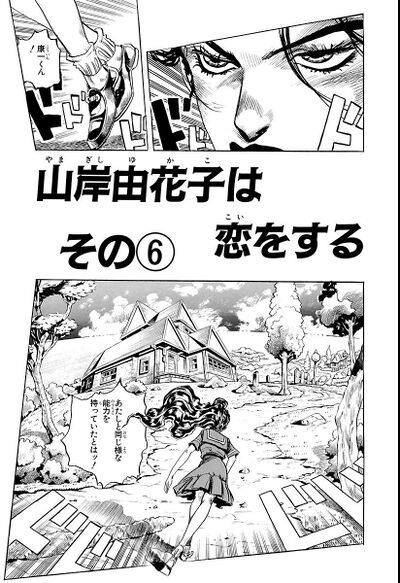 As Yukako furiously heads back to the house, Koichi must avoid her until Josuke arrives for fear that she'd take him away to another place. He takes the electric chair and nails it to the front door, hoping that it will stop Yukako. Having blocked the door with other pieces of furniture, he successfully prevents her from entering, confident that Yukako won't break the windows as to not attract attention. Yukako, stuck outside, confesses that she is happy that Koichi possesses a Stand too, and interprets it as them being made for each other. Just then, Koichi electrifies the handle, which angers Yukako. Echoes then puts the sound "I hate you!" on Yukako's cheek to drive her away, but it reveals ineffective. Yukako literally does not take these word into account, as her obsession is too strong. Koichi then feels that his hair is being pulled backward by Love Deluxe's power and is smashed into the cabin. Still stunned, he is then smashed against the electric chair which destroys it and enables Yukako to slightly open the door. She then declares that one way or another Koichi will love her or he'll die. At the brink of despair, Koichi tries to use Echoes, but the Stand has petrified itself and remains still. Echoes begins to lose its color and Koichi thinks that his Stand died out. However, the cocoon sheds itself, revealing something inside it.