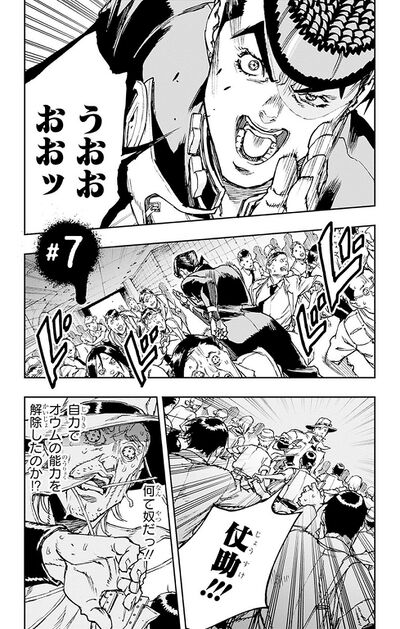 Enraged, Josuke dashes toward the enemy who shot at him with a crossbow. Hol Horse is stunned that Josuke was able to break free from the parrot's ability. The enemy shoots another arrow at Josuke but Josuke easily deflects it with his Stand, surprising the shooter. As he wonders who Josuke is, he continues shooting more civilians in the back. Suddenly, it appears as if Josuke is shot in the forehead. Hol Horse screams in fear, but Crazy Diamond had actually managed to grab the arrow in time before it completely pierced Josuke.

The wind from the illusionary military helicopter causes Hol Horse's hat to fall off. He cowers in fear from the helicopter shooting at him and the civilians. He tries calming himself down and goes to grab his hat but suddenly imagines that his hand got shot, creating a large hole and detaching a finger. He thinks back to the fear he felt when he confronted DIO, wondering if he hasn't changed at all since then. The thought of DIO returns him to his senses, as he realizes that the fear he is feeling right now is nothing compared to what he felt back then.

Regaining his composure, Hol Horse fires two bullets with Emperor. The bullets phase through the illusionary helicopter and zoom past Josuke, blowing off the enemy's ear and a fragment of his crossbow. Petsounds starts flying away, momentarily distracting Hol Horse and Josuke which allows the enemy to run away. Josuke uses his Stand to punch the fragment that fell off the crossbow. He thanks Hol Horse for leaving some evidence behind which would allow him to track the enemy down and tells Hol Horse to go after the parrot. Hol Horse recalls when Petsounds's owner told him that she thinks of the parrot as her own son. Thinking that the owner wouldn't want her "son" to cause several casualties, Hol Horse shoots Petsounds, blowing off one of his wings. He mutters an apology to the old lady, upset that he broke his promise with a woman.

Meanwhile, the crossbow wielder is hiding in the bushes. He felt thrilled to shoot random kids and civilians. As he peeks from a hole in the bushes, he waits for Josuke to follow his blood trail while he aims his crossbow. However, Josuke thwarts his plan by suddenly appearing behind him. Josuke used his Stand to restore the broken fragment from the crossbow, allowing Josuke to find where the man was hiding and also served as a distraction as the crossbow fixed itself in front of the man's face. Before the enemy could react, Josuke pummels him with punches using his Stand.

Josuke grabs the man's wallet thinking he could use the money to fix up his uniform, but might actually need it to go to the hospital to treat his arrow wounds. He examines the man's ID, revealing that his name is Koji Kiyohara and that he's a university student. Using the string from the crossbow, Josuke ties up the man to a tree. Just then, Ryohei arrives, exclaiming that he's been looking for Josuke everywhere. Relieved, Josuke tells his grandpa to arrest the man he caught. Acting like a police officer, Josuke charges Koji with "assault with a deadly arrow".