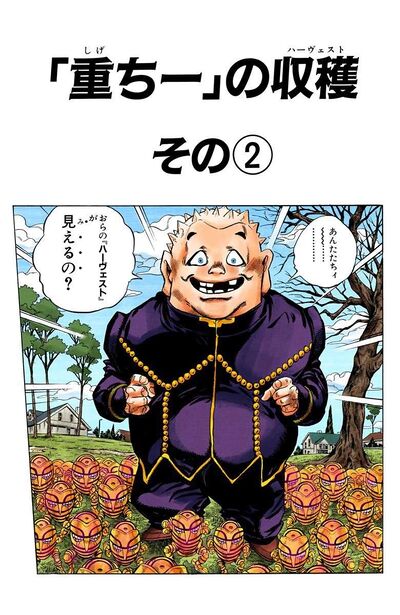 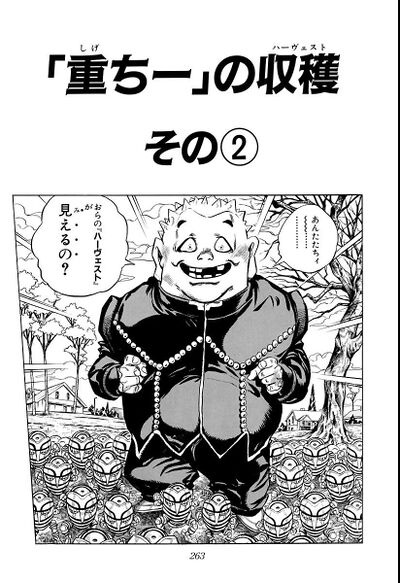 Shigechi's Harvest, Part 2 (｢重ちー｣の その②, 'Shigechī' no Hāvesuto Sono 2), originally A Major Project! (一大「プロジェクト」！, Ichidai 'Purojekuto'!) in the WSJ release, is the seventy-first chapter of Diamond is Unbreakable and the three hundred thirty-sixth chapter of the JoJo's Bizarre Adventure manga.

Harvest's user, a second year at Budogaku Middleschool named Shigekiyo Yangu or Shigechi, is overjoyed to see other people who possess the same kind of ability as his. Shigechi reveals himself as a mentally challenged kid with a good heart, and quickly befriends Josuke and Okuyasu, going as far as offering them half of the 120,000 yen he collected. Okuyasu is only too happy to take the gift, but Josuke is more reluctant, feeling that he's exploiting him, and decides to cooperate with Shigechi for a more lucrative operation. Showing Shigechi a stamp, Josuke explains that many stores distribute coupons of the same genre for clients to collect, and enough coupons warrant a prize. Thus Shigechi sends his Harvest looking for coupons across the town and manages to collect a great number of these, which thanks to Crazy Diamond's repairing ability, will enable them to collect tens of thousand of yens.