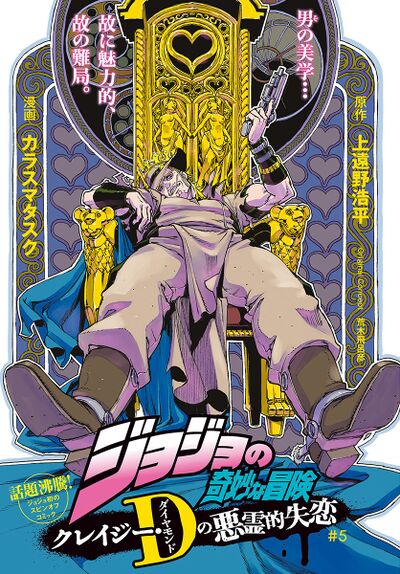 One of the possessed chefs lunges at Hol Horse with a knife and slashes him. He can't fight back as he doesn't want to hurt them. Meanwhile, Josuke asks Ryoko if she feels loosened up now. Ryoko can't believe that she actually slapped Josuke for making fun of Noriaki, and remembers that Tohth predicted that she would also kick Josuke in the butt next. Josuke asks why Ryoko doesn't go to Noriaki for help if something's troubling her and then awkwardly apologizes when Ryoko reveals that he passed away. Just then, Josuke hears a gunshot nearby, though Ryoko didn't hear it.

Ryoko suddenly sees one of the possessed chefs charging toward them with a knife and kicks Josuke out of harm's way, fulfilling Tohth's next prediction. Struggling on the ground, Hol Horse yells out to Josuke, warning him that the women are being controlled. Trying to go as easy as he can, Josuke summons Crazy Diamond and rapidly punches all of the women at the same time. The nearby pedestrians wonder what just happened, as it looked like a storm swirled around Josuke. Josuke pretends that the whole thing was all a live performance, asking a creeped out nearby girl what she thought of it. Meanwhile, the chefs get up and are no longer controlled. Their wounds are healed and everyone wonders what happened as they head back to work.

Josuke quickly runs to Hol Horse and heals him. When Josuke asks what happened to him, Hol Horse reveals the parrot from Egypt is a Stand user that was trained under the orders of a man named DIO. A police officer asks Ryoko what just happened there but Ryoko claims she didn't see anything. Hol Horse assumes that DIO found the bird's recording ability useful as he couldn't go out himself during the day. Josuke feels dumb realizing that even a bird could have a Stand. He had been sensitive about it because he thought he was the only one with it, as if it was some kind of sickness. Hol Horse also reveals that their problem isn't the parrot's Stand itself but the guy who is hiding somewhere and manipulating the parrot. Since Hol Horse doesn't want to kill the bird and let its owner down, he asks Josuke for his help. Josuke agrees, feeling that it's nice to be relied on.

Ryoko was eavesdropping on their conversation, realizing that Hol Horse mentioned "DIO". Wanting to learn more about what he knows, Ryoko looks at the new pages in Tohth's book to see what she should do. The Stand mentions that she shouldn't just ask him directly because he'll play dumb. The best thing to do is look for a fuse waiting to be lit and then ignite it. After that, she'll finally reach the truth while everyone is screaming from the explosion.