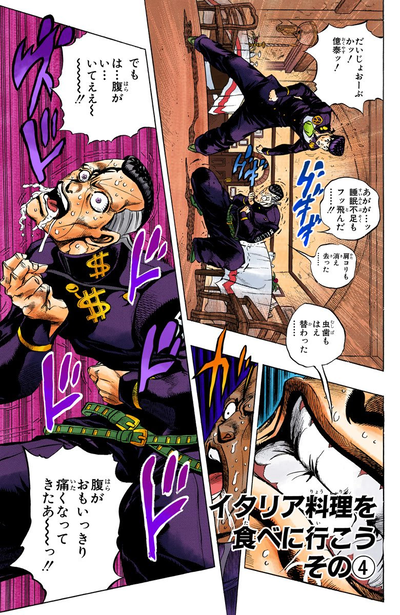 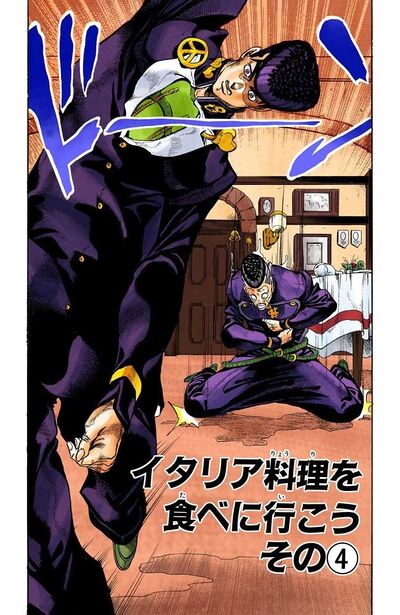 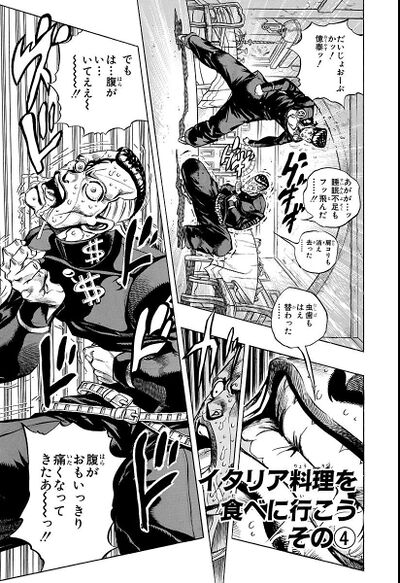 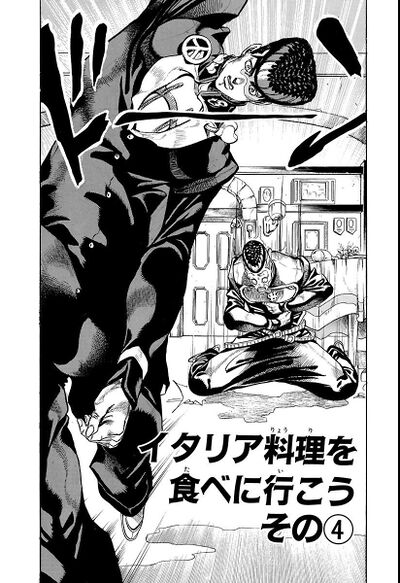 Okuyasu starts to feel intense pain shortly after discovering the existence of Tonio's Stand. Josuke heads into the kitchen of Trussardi's to fully investigate Tonio and discover his true intentions. As Josuke enters, he finds the main dish that is to be served to Okuyasu. He then hears noises coming from further inside the kitchen. He discovers Tonio feeding a dog the exact same dish which, according to Tonio, is lamb with applesauce. The dog suddenly starts to convulse and begins to vomit its intestines.

Tonio discovers that Josuke is spying on him and immediately throws a knife at Josuke, which barely misses. The dog continues to convulse violently, intestines bursting out of its abdomen. Tonio angrily storms toward Josuke, who questions Tonio's motives with the same returned anger. Josuke suddenly notices Okuyasu eating the lamb from the other room. Josuke tries to prevent him from eating but Okuyasu cannot resist the dish's taste and eats all the meat, causing his intestines to burst out of his stomach, much like the dog. Meanwhile, an enraged Tonio closes upon Josuke with a block of soap and unexpectedly asks him to wash his hands with it, much to the Josuke's surprise.

Tonio is revealed to be angry toward Josuke for not washing his hands before entering the kitchen. Okuyasu stops convulsing, and his stomach wound is mysteriously gone. He mentions that his stomach feels better and that his constipation is gone, acting as though nothing happened, which makes Tonio smile. The dog has also returned to normal, barking happily. Tonio then mentions that the dog had stomach problems as well and that he merely tested the tricky main dish on it. He is revealed to have no ulterior motives behind his cooking besides wanting to spread joy with it. After Josuke and Okuyasu reveal their Stands to him, Tonio explains that he came to Morioh to take hold of the opportunities there.

Tonio decides to punish Josuke for entering his kitchen without washing his hands first. He serves Okuyasu pudding for dessert to cure his athlete's foot. Okuyasu is dismissive at first of the dessert saying pudding isn't masculine enough, but he finally enjoys it as much as he does the other dishes. Josuke, however, is unfortunately left to clean the kitchen without a bite to eat.