Harada Tadashi (原田 忠, Tadashi Harada) is a Japanese professional hair and makeup artist for Shiseido. He is most known for his 3D visualizations of various anime and manga, including JoJo's Bizarre Adventure, Terra Formars, Gundam, Gurren Lagann, Gin Tama, Lupin the Third, and Pokémon.

Born in 1971, Tadashi grew up with his mother who ran a beauty salon. After graduating from highschool in Numata, Gunma, Tadashi joined the Air Self-Defense Force with the hopes of becoming pilot. However, stuck working as an air traffic controller, Tadashi decided to pursue a job in a different career. Tadashi wanted to work someplace closer to where he grew up, and so turned to the beauty industry.

At the age of 22, Tadashi quit the Air Self-Defense Force and entered the Yamano College of Aesthetics. After graduating, he worked in a salon for five years. In March 2000, he graduated from the SABFA (Shiseido Academy of Beauty and Fashion), and joined Shiseido in April 2000. Tadashi was employed as part of the company's Beauty Creation Research Center and had been involved in hair and makeup related actives in New York, Paris, and Toyko.

Tadashi has been a big fan of Araki's works ever since he first read Baoh the Visitor as a kid. His favorite character is Joseph Joestar.[3] 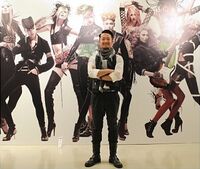 Tadashi during his solo-exhibition in 2013.

In 2013, Tadashi collaborated with JoJo's Bizarre Adventure to create a JoJo-inspired photoshoot featuring fashion models as live-action homages of characters from the series. It originally featured a total of 15 characters from Part 3 to Part 6, including Giorno, Jolyne, Rohan and Josuke. The photoshoot took place over the course of about two years, and was created with the goal of presenting JoJo in a way that hadn't been seen before through the use of hair, makeup, and fashion. The photoshoot was originally meant to be shown at the Hirohiko Araki JoJo Exhibition 2012, however it was unable to completed in time. Instead it was later shown at Tadashi's own solo hair make-up exhibition that took place Tokyo and Osaka from March 30 to April 2, 2013.[4][5] 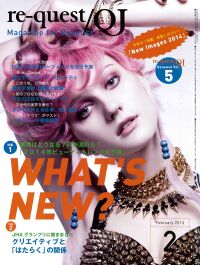 Trish Una on the cover of "Re-quest/QJ February 2014" by Harada Tadashi.

In January 2014, a new photoshoot was created featuring Trish and Doppio from Part 5, Mikitaka and Terunosuke from Part 4, and Sandman from Part 7. The photoshoot was announced in the February 2014 issue of "Re-quest/QJ" magazine, which featured Trish Una on the cover.[6][7]

On January 25, 2017, Tadashi released his book titled "The Complete Guide to Harada Tadashi" which featured various works from his career as a hair and makeup stylist, also including his works featuring JoJo.[8][9]

On July 27, 2017, Tadashi teased the two visuals for the 2018 Guide Pamphlet for the SABFA school in an Instagram post and stated that he had "manifested the stand of hair".[10] In a later post, he put forth the question, “what if women could manifest their own supernatural power to make themselves more beautiful?” He expressed this idea through a ‘vision’ of hair with a will of its own moving make-up brushes and lipsticks freely, as if it was a Stand. He named the Stand, The Makeup (ザ・メイキャップ, Za Meikyappu), and also gave it stats.[11]

In 2019, Tadashi was the hair and make-up artist for the music video "Freedom In The Dark" by Tomoyasu Hotei, as he is a frequent collaborator with Hotei. In a twitter post, Tadashi confirmed that Jolyne and Sandman are hidden within the video as the look for two of the models.[12]

In JOJOmenon, a mook released to commemorate JoJo's Bizarre Adventure's 25th Anniversary in 2012, Tadashi was included with a comment from him talking about what kind of Stand he would like to have and his enjoyment of the series.[3]

Commentary
“
For work, I think it would be good to have a remote control and speed-type Stand that could read the client’s needs and present the hair and make-up in an instant, all while handling multiple clients. Something like Cinderella or Atum, while also being a colony Stand like Harvest and Bad Company to handle multiple clients. I’m a huge fan and have been reading JoJo without missing a single volume since its inception, so I would be happy if I could use that kind of a Stand!
”
—Harada Tadashi, JOJOmenon
“
仕事柄、あったらいいなと思うのは、相手の要望を読み取ってヘアもメイクも瞬時に表現し、同時に何人も仕上げられる遠隔自動操縦&スピード型のスタン ド。たとえばシンデレラやアトゥム神のようにイメージを操作しながら、ハーヴェストやバッド・カンパニーのような無数のスタンドで同時に何人も仕上げる。「ジョジョ』は連載当初から欠かさず読んでいる大ファンなので、そんなスタンドが使えたらうれしいです!}
”
—Harada Tadashi, JOJOmenon